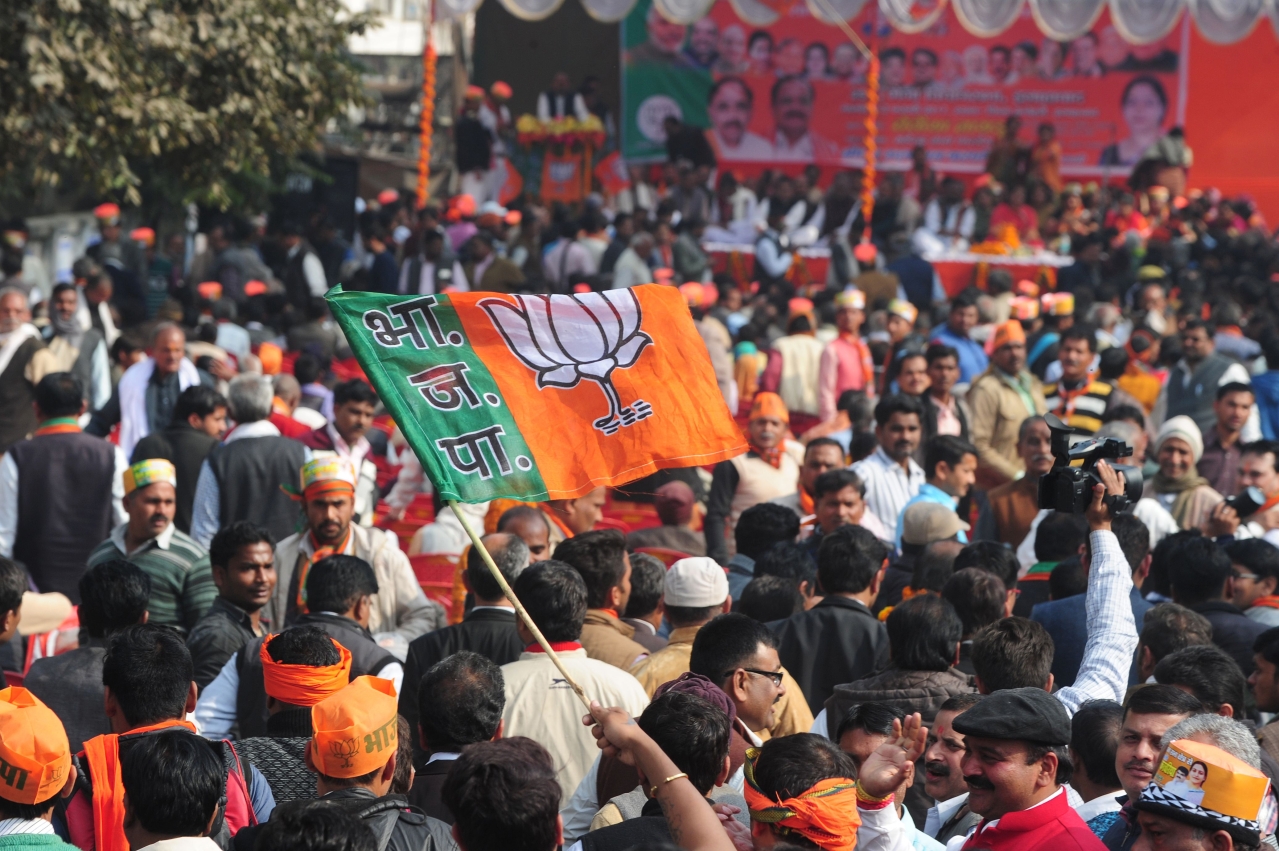 The ongoing Lok Sabha (LS) polls in Uttar Pradesh (UP) is one of the most intriguing post-emergency elections. It all started on a dull note for BJP in the backdrop of defeats in Phulpur and Gorakhpur LS bye-elections in UP in March 2018 and assembly elections in three major states of MP, Rajasthan and Chattisgarh in December 2018. The scenario was further dampened due to SP-BSP alliance in UP in January 2019 that seemed to promise great performance by the Akhilesh-Mayawati duo in the state.

But, as the Election Commission announced LS poll schedule in March 2019, things steadily began improving for the BJP and Prime Minister Narendra Modi. With every phase completed, BJP kept improving its performance. After the first phase of polls, there developed an under-current in favour of Modi that slowly assumed the character of a “mini wave” in several constituencies and finally, as we reach the end of the polls, one can sense an “imperceptible Modi wave” in UP.

The credit for this must go to Bahujan Samaj Party (BSP) chief Mayawati who, in the first phase, polarised the electorate by giving a call to the Muslims to vote unitedly for the Samajwadi Party-Bahujan Samaj Party-Rashtriya Lok Dal (SP-BSP-RLD) gathbandhan candidates that prompted UP Chief Minister Adityanath Yogi to deepen this polarisation by making the contest Ali vs Bajrangbali. Notwithstanding the Election Commission chastising them both, the subsequent phases of elections were fought with the electorate heavily polarised, forcing many dalits and OBCs to vote for BJP.

The second catalyst for BJP came from the Congress decision to contest by themselves in UP, without joining the gathbandan. They appointed Priyanka Vadra, Congress President Rahul Gandhi’s sister, as the party General Secretary and put her in-charge of eastern UP, and assigned western UP to Jyotiraditya Scindia. Had Congress joined the SP-BSP-RLD gathbandhan, the contest could have been bipolar and things would have been tougher for BJP. But, the Congress decision to make the contest triangular came as respite for BJP that brightened its chances.

Not only the anti-Modi camp had been euphoric about SP-BSP-RLD gathbandhan and entertained hopes of trouncing BJP in UP, even the pro-BJP lobby and the top BJP leadership, including Amit Shah, were initially sceptical about BJP’s success against the gathbandhan candidates. This was premised on the phenomena of ‘transferability of votes’. The gathbandhan optimism was founded on the simple arithmetic of combining the vote share percentages of SP and BSP as obtained in the 2014 LS polls—SP’s 22.2 per cent plus BSP’s 19.6 per cent vote share adds up to a massive 41.8 per cent, leading to a clear victory for them.

However, as SP-BSP animosity spread over quarter of a century (1995-2019), the coming together of Mayawati and Akhilesh had left their cadre unconvinced and the political coalition did not lead to any social coalition between them at the constituency level. Muslims found an alternative in Congress and, hence, gathbandhan lost its monopoly claim over their votes. Yadav’s were non-supportive of gathbandhan candidates where the seat went to the BSP and even where it went to SP, they had options in Shivpal’s Pragatisheel Samajwadi Party (PSP), BJP and Congress. The dalits were not as attached to Mayawati as they used to be a decade back and where they did not find the elephant, they clearly shifted to Modi. Thus, all calculations of transferability of votes of SP and BSP went haywire.

The Build-up of ‘Brand Modi’

Meanwhile, one notices that Modi has broken the ‘caste-stranglehold’ and entered into the domain of ‘class’. His emphasis on 130 crore deshvasi, his inclusive politics of development and his clean, hardworking personal image, scam-free five-year tenure and strong postures vis-à-vis Pakistan and China made brand Modi a household name in both rural and urban India.

The spontaneity with which the poor, marginalised, and unorganised menial workers and women favour Modi for their mandate is a complete surprise. And, the women include Muslim women who not only feel benefitted by beti bachao-beti padhao, toilets, rural and urban housing for poor and initiatives on triple talaq but also see in Modi a good leader who is needed for the betterment of the country. Thus, what began through social engineering as a small step towards inclusive politics in UP by Mayawati in 2007, has now been transformed by Modi into inclusive development and politics.

To add to Modi’s advantage, the Congress president, Rahul Gandhi, chose to indulge in negative and pessimistic RAC (Rafael, Ambani & Chowkidar) campaign, abusing PM Modi with “Chowkidar chor hai”. He also dragged the honourable Supreme Court into this for which he had to apologise recently. But, the more Rahul abused the PM, the greater he fell in public esteem. Initially, for a few laughs or as a witty barb, it was fine, but as he chose to make “Chowkidar chor hai” a regular feature of his electoral campaigns and speeches, it became counterproductive. People of India are very sensitive; they do not approve of any one crossing the laakshman rekha. To many, Rahul appears to have crossed that.

The 2019 LS polls will be remembered for being totally Modi-centric. While this is a continuation of the Modi-model of campaign since 2013-14, it also has the seeds of transforming the parliamentary system into a presidential one. That has not only dwarfed several party stalwarts but it has also made local contestants of the party irrelevant. The way “brand Modi” has established itself is an interesting and new phenomenon in Indian politics. For too long the people’s psyche had been oriented only towards the “Nehru–Gandhi brand” but now a competitive “brand Modi” has made political contests very fierce.

Lok Sabha Polls are for the Nation

It is useful to recollect that this campaign had Modi prophesying a “Congress Mukt Bharat” (Congress free India) and to achieve that objective, Modi and the BJP have gone for total transformation at the constituency-level. They have “appropriated” or “amalgamated”—whatever you may like to call it—the Dalits, OBCs and even made inroads among the Muslims. Mahatma Gandhi-Sardar Patel duo, Dr Bhimrao Ambedkar, Dr Rammanohar Lohia, all these stalwarts, are no longer exclusive icons of the Congress, BSP and SP respectively; they are all comfortably included in BJP’s kitty as of now.

And, coupled with this is a clear realisation among people that the Lok Sabha Polls are about the ‘Nation’, and that the Nation needs Modi. The people have differentiated between the national and local/provincial polls and, hence, local petty issues, candidature and organisational concerns that earlier used to influence even LS elections, were no longer visible in most states and constituencies. And that’s why bringing in Priyanka Vadra by the Congress has been of no consequence. The Congress has lost its old guards and, now, banks on paid workers.

Finally, Modi’s inclusive development model has perceptibly benefitted the poor and the marginalised through various social security schemes using the DBT (direct benefit transfer) method (covering about 450 central government schemes), where the money goes directly to the beneficiary bypassing the middlemen. What ujjwala did in 2017 in UP, DBT is going to do in 2019.

The BJP has done an excellent organisational effort to mobilize the cadre under the leadership of Amit Shah. To add to this, Modi’s man-ki-baat has been a master-stroke that many have not been able to appreciate. Through man-ki-baat, Modi regularly remained connected to the people of India and that connection became more intimate because he never talked politics but just raised issues that could better the lives of people. To me, man-ki-baat was truly smart politics and its effects are clearly being felt now. Without any apparent demonstrable wave, Modi is really riding a ‘silent wave’ that may surprise us all, not only in UP but elsewhere too.