What Is The Bheem Army Of Chandrashekhar Azad Ravan? 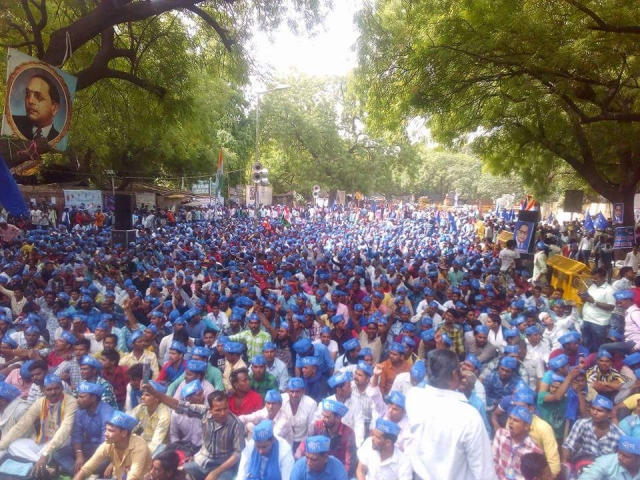 As fresh clashes erupted in Saharanpur on Tuesday and one more person lost his life, the focus is on the Bheem Army, a Dalit organisation, and not Mayawati who visited the Shabbirpur village where Rajputs had set fire to Dalit homes about a week ago.

Rajputs and Dalits in the district have been fighting one another for several years. For Rajputs it is a question of dominance, for Dalits, it is a fight against oppression.

Led by its founder Chandrashekhar Azad Ravan, a young Saharanpur lawyer, and national president Vinay Ratan Singh, Bheem Army has been fighting for the rights of Dalits and a life of dignity for the community, refusing to be cowed down by the upper castes.

Chandrashekhar belongs to Chhutmalpur village adjoining Shabbirpur, the epicentre of recent troubles. He and Vinay Ratna Singh formed the Bheem Army Ekta Mission on 21 July 2015 to serve the interests of Dalits. The mission’s main aim was to educate the community’s children free of cost. Their first school came up two years ago at Saharanpur’s Bhado village.

The Bheem Army now runs over 300 schools in and around Saharanpur proving the seriousness of its intent.

At the same time, the Bheem Army has also been at the vanguard of recent Dalit agitations, including the one in April when an Ambedkar Jayanti procession was stopped by Rajputs.

Chandrashekhar, who dreamed of pursuing higher studies, chucked the idea as he got involved in the hurly burly of Dalit politics.

The Bheem Army made its appearance last year when some Dalits wanted to put up a board at Ghadkoli village proclaiming Dr Bhimrao Ambedkar as the Great Chamar. The move was objected to by the Rajputs. Intervening on behalf of Dalits, Chandrashekhar is said to have defended the move arguing that since their certificates identified them as Chamars, there was nothing wrong in calling Ambedkar as the Great Chamar.

After the Bheem Army’s intervention, the board was allowed to be put up. It now stands as a symbol of Dalit victory.

Chandrashekhar’s strength became visible when thousands of Dalits staged a protest at Jantar Mantar in New Delhi against the partisan behaviour of the police and atrocities by the upper castes. Even while remaining underground, the two leaders of the Bheem Army were able to mobilise thousands of Dalits for the Delhi protest.

With sizeable presence, said to have around 40,000 members, and growing appeal in western Uttar Pradesh, Bheem Sena is emerging as the new champion of Dalits’ cause and, perhaps, a churning in Dalit politics is on the cards. As of now, however, Chandrashekhar and Vinay Ratan Singh have not given any indication of their political ambitions.

It is the Bheem Army’s strength which must have prompted Mayawati to visit Saharanpur. Without naming the army, she said on Tuesday that small organisations working for Dalit’s cause should join forces with the Bahujan Samaj Party.

Bheem Army’s national president Vinay Ratan has said that the army was meant to fight Dalit oppression and was ready to take the oppressors head on.

The police claim that Chandrashekhar was using social media to galvanise his army and enlist support. To tie down the Bheem Army, the Saharanpur police were investigating if it had links with the Naxals.

Violence broke out in Shabbirpur on 5 May after Dalits objected to loud music being played by Rajputs. A Rajput was killed in the fight and the community retaliated by burning down 25 Dalit homes.

The state police chief Sulkhan Singh visited the area, and two police officials were suspended for laxity, but tension simmered.

Tuesday’s incident in Saharanpur, a third in the recent past, occurred when a truck carrying Dalits back from Mayawati’s rally was attacked allegedly by Rajputs. Earlier, Dalits allegedly threw stones at Rajput homes while they were going to the rally venue.

Explaining the caste situation in Saharanpur, Rajesh Mishra, former head of Lucknow University’s Sociology department warned, “As Rajputs were the dominant caste in Saharanpur and Bulandshahr and Jatav presence was also significant, clashes between them could become a problem, now that the former symbolise power.”