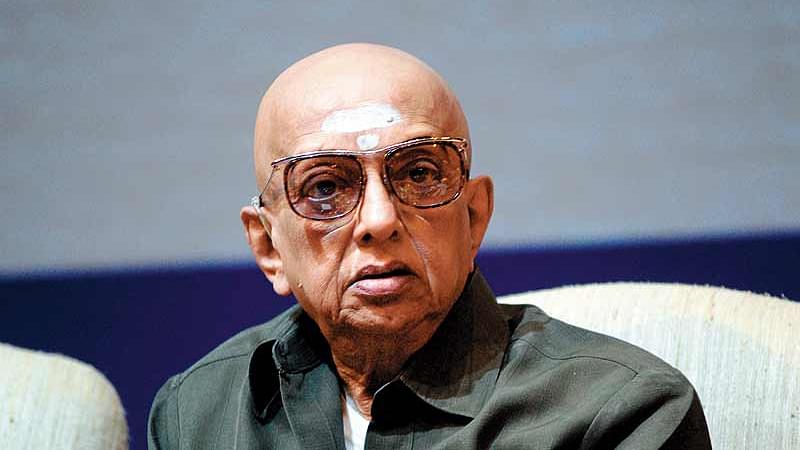 The legendary satirist and public intellectual from Chennai Cho Ramaswamy is no more after a prolonged battle with his health. The most enduring memory of Cho Ramaswamy is from the annual Reader's Conference of his legendary Tughlaq magazine from back in January of 2008.

It was one of Narendra Modi’s first visits outside Gujarat after being re-elected to power in Gujarat in December of 2007. Much of the media focus during that January 2008 visit to Chennai was on the two hour long Pongal lunch with the AIADMK Supremo J Jayalalithaa. While the 45 items lunch menu made much news a very important event later that evening in Chennai went largely unnoticed.

Over the past many decades the Tughlak Weekly Magazine in Tamil had become an institution of sorts cast in the satirical mould of its founder editor’s acerbic wit and politically sharp commentary.

Cho Ramaswamy’s Tughlak was known for its bold anti-establishment stance during the Emergency and it was this reputation for being fearless in the face of tyranny by the Congress Party that perhaps brought Narendra Modi and Cho Ramaswamy closer to each other over the decades. It was the 38th anniversary of the Tughlak Magazine that saw Narendra Modi in Chennai. Going back to that 2008 speech at the Thuglak Conference Narendra Modi not just spoke in English but did so without the aid of any prepared text. His extempore speech in English was delivered with the comfort of a natural speaker who had the pulse and the attention of his audience.

The audience in that auditorium in Chennai in January of 2008, was introduced to Narendra Modi by Cho with his trademark acerbic wit and humor. Cho opened his introduction by taking the Congress President Sonia Gandhi to the cleaners for her controversial ‘merchant of death’ remark made a few weeks earlier in Gujarat during the 2007 Assembly Election Campaign in that state. By the time Cho had finished with his introduction the audience was already in raptures with cheers and whistles filling the auditorium. Narendra Modi had not even begun to speak yet.

It took over a minute or two for the applause to stop before Narendra Modi could take the stage. And he opened with these remarks on Cho:

I am a fan of Cho…I had first heard of him during the Emergency days when he stood for Democracy, he fought for Democracy…my colleagues were giving me information those days as I was underground at that time…I was also fighting for Democracy in my own way…from the information I was getting I learned that Cho was writing on the story of Two Donkeys to chronicle the events during the Emergency Period…I contributed my bit by translating what I learned of Cho’s writings into Gujarati and Hindi to be shared abroad in different countries to boost the morale of the Indian community who were distressed over the Emergency back home.

Narendra Modi speaking on Cho Ramaswamy, January of 2008 in Chennai

Paying rich tributes to Cho Ramaswamy, Narendra Modi had this to say:

This is a unique programme he has always been organizing, this Reader’s Conference (referring to the Thuglak event organized annually by Cho)…when he invites his Readers he is ready to listen to their criticism…any reader can ask him why you have written so, what are your views on the issue…it requires courage to face self- criticism and only a true democrat can do this and I always feel Mr. Cho is a true Democrat…if BJP is doing anything wrong he publically criticizes BJP…it requires conviction…there are many in the BJP who are close to Cho but this friendship never comes in the way of his conviction…I am here today to salute Cho.