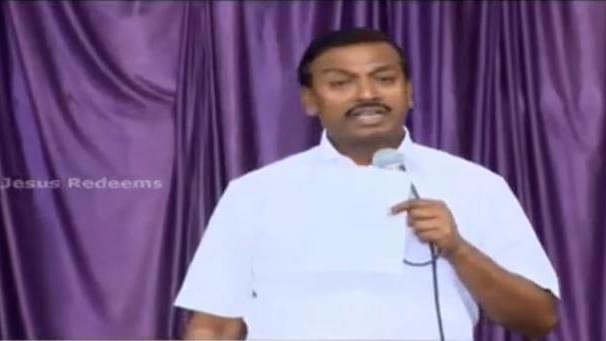 The crowd roars in approval.

"You think you have made a Hindu priest the Chief Minister of Uttar Pradesh? No. Jesus made you select him and elevate him as the CM of UP."

The crowd makes a subdued sound. Now, the speaker raises his voice.

The crowd erupts into hysterical hosannas and hallelujahs. Then he tells the crowd to be on their knees and pray to Jesus for these events to hasten.

Meet Mohan C Lazarus, the controversial Christian preacher, who runs an evangelical empire of hate and bigotry in Tamil Nadu. He is no crackpot missionary. He is a fundamentalist and a fanatical Christian zealot with close links to the allegedly rational political establishment of the state. He was born in a pious and wealthy Tamil Hindu family. Apparently, the “money consuming diverse medical treatment” failed to heal his bulging heart, and when he was in his death bed, “the Lord sent one of His Vessels to counter His eternally chosen tool to bring him unto His fold”. Thus Murugan morphed into Mohan Lazarus.

Tamil Nadu has witnessed a number of Christian channels flourish, operated by various denominational groups, which indulge in relentless 24x7 theological indoctrination, interspersed with manufactured tales of miracles and tear-jerking testimonials (mostly from those who claim that they used to be Hindus earlier).

Sathiyam TV, which features many of Lazarus’ programmes, is devoted to anti-BJP political propaganda. It also revels in airing anti-Hindu news and specialises in amplifying schisms between Hindus.

Sathiyam TV shot to notoriety when one of its reporters tried to belittle Ilayaraja, the colossal genius of the Tamil music industry. Illayaraja was coming out of a school after making a contribution to the relief and rehabilitation fund in the aftermath of 2015 Chennai floods. The Sathiyam TV reporter barged in and asked for his views on an obscene song of an actor that had become controversial around that time. Ilayaraja was in no way connected to this silly Kollywood episode. Illayaraja, who is known to be caustic at times in his dealing with unwelcome media intrusions, was justifiably angry. Sathiyam TV attempted to foment a backlash against Illayaraja alleging that he obstructed a journalist from performing his duty. However, the attempt fizzled out.

Illayaraja, who is much loved in Tamil Nadu, has a huge fan following cutting across caste, religion and politics. He comes from a scheduled caste community. Born a Christian, he now identifies himself strongly with the Hindu culture. He is a staunch devotee of Bhagwan Ramana and Goddess Mookambiga. So, for Mohan Lazarus, his evangelical stormtroopers and pseudo-journalist brigade of Sathiyam TV, he became a target.

In 2014, Sathiyam TV aired in its evangelical programmes a call for the "elimination of this dreaded person from this world and also his children (supporters)". The cry for elimination was aired full three minutes, repeatedly. In 2015, the channel was served a notice by the Ministry of Information and Broadcasting. The Sathiyam TV immediately grabbed a secular propaganda line and cried 'political censorship'. Interestingly, the explicit call for religious war and violence was ignored by the old establishment media when they reported this action by the Ministry of Information and Broadcasting.

A survey by evangelical magazine Jesus Redeems shows a contempt for Hinduism bordering on pathological. As we have pointed out earlier in Swarajya, this evangelist had declared that tsunami was God's revenge against idol worship. In the August 2015 issue, the evangelist claimed that 14.7 million Indians are living as slaves. After listing a series of secular woes like corruption, poverty etc, he brings in Hindu-phobic theology as a solution: "What is the reason for the people of India to dwell in poverty when they are living in such a rich and prosperous nation? It is a curse that is causing such a havoc on the nation. There are two main reasons for the curse upon this nation. First, idol worship and second, adultery... look at India: the number of statues in India will far exceed the total population of the country! Our Indian people are those who will worship anything in the name of religious faith!" (emphasis as in the original).

Note that this evangelist, who runs mass conventions across the state, declares idol worship, a Christian-Islamist term to describe worshipping by the Hindus, as a sin which is worse than adultery. Note also that he makes it the reason for poverty in India and indulges in a whirlwind propaganda.

Lazarus’ activities extend beyond Indian borders into Nepal, where religious conversion is illegal. Yet in the name of helping the earthquake victims they conduct their proselytising activities.

"We intend to buy tin sheets required for the roofing work of five churches through Senior Pastor Rev Dev Anand and for another 20 churches through Pr Om Prakash Subba." Note the Hindu names they use to deceive locals. The magazine Jesus Redeems (08, 2015) further states that they "are planning to adopt another 150 families from the village of Kim Tong, near the China border". They also ask believers to pray that "the obstacles that the government has been putting on their way be removed". The political fallout of such evangelism on the China-Nepal border cannot be lost.

Lazarus governs a vast empire, from his headquarters at Nallumavadi, a place strategically placed near the ancient and famous Hindu pilgrim centre Thiruchendur. He is many times explicitly political in his message. He shares stage with top leaders of Dravidian parties like M K Stalin. He seems to aim for an evangelical coalition-controlled polity in Tamil Nadu. His connection with the 'secular' parties can be gauged by the fact that his convert and an evangelist ex-actress Nagma, after her conversion, was able to have a meteoric rise in the Congress party and became a candidate in 2014 parliamentary elections. Converts of such charismatic evangelists are now infused with political ambitions, and these attempts are now sold to the faithful as the word of God.

It comes as no surprise that some of the bizarre arguments that Lazarus puts forward finds traction with many parties, including the Left.

Consider the recent outburst of Communist Party of India Marxist chief Sitaram Yechury against the Aadhaar card. He indulged in fear-mongering by invoking an absurd parallel with Hollywood sci-fi movie Matrix (in a way an improvement for a Marxist, given the fact they love to quote Marx and Mao, though here flawed)

It is ‘The Matrix’, where each one of us has a number and we are all slotted into one matrix. The controller, sitting there, shall control what you and I will do and what is our individual role in society, and if we are found violative, we are just ejected from the matrix. Your number can just vanish. An Aadhaar number can just vanish and that means, you are not a citizen anymore.

Now, read what Jesus Redeems magazine has to say about Aadhaar card as part of its series on apocalyptic times:

Every detail in the Aadhaar card will be found in the Government database. It is not only true that all your particulars can be obtained by accessing the card, it is also possible to track your movements or whereabouts by the government. If you happen to wander around without this card, the police can imprison you under suspicion and torture you. ...What is expected to happen in our Christian society following this?... There is a compulsion for all saved believers to make a stand either for the world or for God. The climax is taking place now!

It is interesting to see how the voice of Marxist ideologue in 2017 echoes the voice of a Christian fundamentalist track in 2014.

Tamil Nadu is becoming a hotbed for evangelists of the worst fundamentalist persuasion. What is even more dangerous is their extremely strategic intrusion and manipulation in secular politics of the state. They are always inclined towards inciting neo-Luddite, anti-Hindu and anti-BJP agitations. Whether it is Mohan Lazarus, who has been steadily building a strong empire for logistics to incite communal hatred or Umashankar IAS, an evangelist, who calls for death sentence to homosexuals, they are no crackpot fringe elements. They enjoy the tactical support of the strong Protestant Church in South India which has been cultivating political and social faultlines in Hindu society for decades.

An eminent Tamil writer, who himself was a staunch Leftist, once happened to be staying in a hostel run by a church for Scheduled community students. The writer recorded how he and others in the hostel were advised to hate Gandhi. Every morning the students were made to recite a song, lyrics of which translates to 'hey dog, who are you to call us Harijans?'. The song soon became popular with CPI-ML.

Given all this background, it is unbelievable that hate speeches targeting even the Prime Minister go uncriticised. As for Tamils, the current polity will continue to encourage evangelists and rabid hate mongers, and there seems to be no end to this. Whether such orchestrated hate mongering will lead to a UP-style consolidation of Tamil Hindus is yet to be seen.