Why Modi Must Bite The Bullet In J&K: Governor’s Rule Is The Only Option 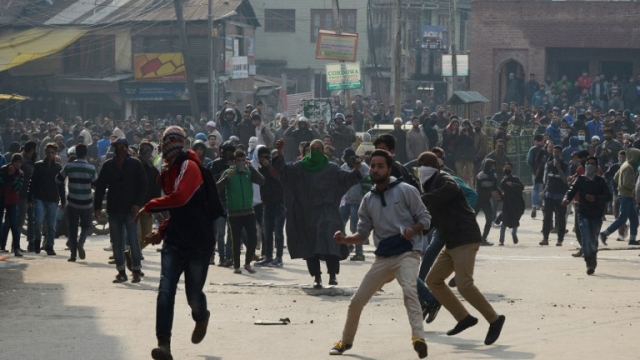 Logically, given the rapid deterioration in the law and order situation in Kashmir Valley, where it is the armed forces that are now on the backfoot, the Centre should be pulling the plug on the Bharatiya Janata Party’s (BJP’s) coalition with the Peoples Democratic Party (PDP). A spell of Governor’s rule is vital to restore a degree of normality. This will enable the state and the men in uniform to act decisively to put down the militancy and restore confidence in the police forces. Without this, there is little chance that the Centre can resume a dialogue with political forces that everyone and his aunt is talking about.

The question is what is holding the Centre back?

One could be a loss of face for the BJP. Having entered into government in Jammu & Kashmir for the first time since Independence, the BJP may be reluctant to admit that the coalition with PDP has failed. But surely the national interest has to come before that of the BJP’s political interests.

The second reason for ambivalence may be the possibility that even the PDP may now turn overtly pro-separatist. There is some validity to this fear. The PDP has, in the past, been more pro-separatist than the National Conference, and by binding it to the coalition, the BJP has defanged it at least in terms of political rhetoric. Abandoning the government means the PDP will start using separatist language again.

But again, this fear can be surmounted. The point is the PDP has been unable to restore law and order despite its electoral mandate in 2014 in the Valley. So it can hardly claim to represent anyone beyond its party cadres. And right now, it is unable to get the separatists and stone-pelters to back off and allow law and order to be restored. Chief Minister Mehbooba Mufti has often enough talked about involving Pakistan for a permanent solution, but this is nonsense, for Pakistan wants no solution apart from prising Kashmir from India in the name of Islamism. Mufti’s currency is limited, since she has nothing to offer the BJP or the nation in terms of a solution.

The third fear that is preventing the BJP from imposing Governor’s rule may be the possibility of opposition from the national parties, which will be quick to blame the BJP for making a bad situation worse. This is quite likely, since they will obviously make hay from the BJP’s discomfiture. But Farooq Abdullah has, after winning from Srinagar Lok Sabha constituency on a thin vote, called for the imposition of Governor’s rule. So the national parties don’t necessarily have the ability to spike the Centre’s guns.

Under article 92 of the Jammu & Kashmir Constitution of 1957, which deals with the breakdown of the constitutional machinery in the state (which is now clear to everyone), the legislative assembly can be set aside (or suspended) “if, at any time, the Governor is satisfied that a situation has arisen in which the government of the state cannot be carried on in accordance with the provisions of this Constitution, the Governor may by proclamation (a) assume to himself all or any of the functions of the government of the state and all or any of the powers vested in or exercisable by anybody or authority in the state; (b) make such incidental and consequential provisions as appear to the Governor to be necessary or desirable for giving effect to the objects of the proclamation, including provisions for suspending in whole or in part the operation of any provision of this Constitution relating to anybody or authority in the state…”.

It is time to invoke Article 92 to restore constitutional authority since it is obvious that there is a danger of Article 3 of the Constitution going for a toss. Article 3 of the J&K Constitution emphasises that “the state of Jammu & Kashmir is and shall be an integral part of India.” But it is precisely this article that the separatists are trying to junk, and escalating the violence to achieve this objective.

Moreover, in the Directive Principles of State Policy, item 25 specifies that it is the “duty of the state to foster equality and secularism; (and) the state shall combat ignorance, superstition, fanaticism, communalism, racialism, cultural backwardness and shall seek to foster brotherhood and equality among all communities under the aegis of a Secular State.” (emphasis mine)

Now, is it anybody’s case that the state is anywhere close to being secular?

The case for Governor’s rule has never been stronger. Prime Minister Narendra Modi should bite the bullet and suspend the state assembly and let the Governor run it till the situation improves.