Why no Outrage over Conversion of Tsunami Victims? 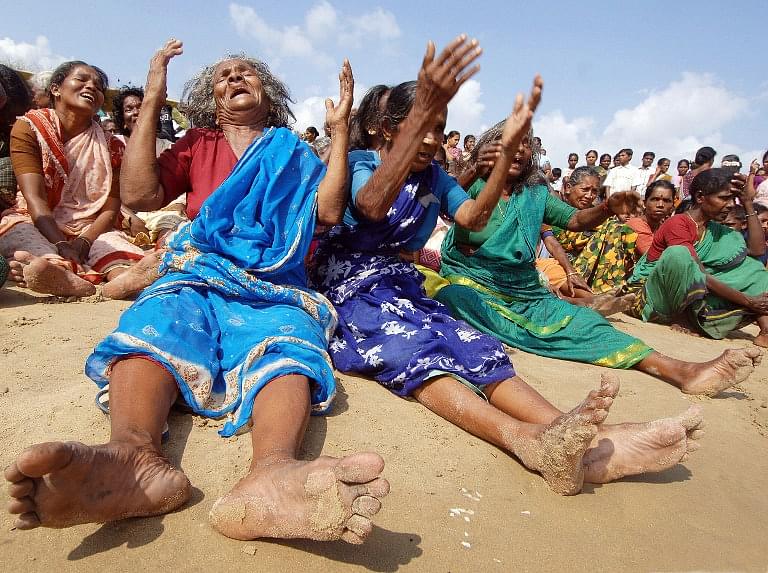 Rampant evangelism used the human agony of tsunami, yet there was not a single op-ed in national newspapers, not a low decibel murmur in the high voltage chat-shows of the media networks.

Ten years before this year, a tsunami struck the south Indian coast and wreaked havoc with the lives and properties of our coastal communities. Official records state there were about 8,000 deaths in Tamil Nadu, of which 6,065 died in the Nagapattinam district, of which 2,406 were women and 1,776 children.

Even as the nation and Indian rescue workers shared the pain of their loss and toiled to rescue and rebuild their lives, there were other forces at work. They made use of the immense human tragedy to their advantage. The government was of the United Progressive Alliance (UPA). Though the activities were well documented, there was no media outcry over such unethical use of a colossal human tragedy to further religious conversions among the traumatised. There were no op-ed articles on the exploitation of the trauma of a Third World country by missionaries with foreign institutional and financial connections. Inhuman statements were made by powerful evangelists closely associated with the then ruling coalition, which the media conveniently and calmly overlooked. Here is a recap of what happened when the 2004 tsunami was used for proselytisation under the UPA:

Mohan C Lazarus runs Jesus Redeems ministries. He is not a fringe actor but the owner of a vast evangelical empire in Tamil Nadu. He is supported by the protestant dioceses across the nation. He can rope in powerful political heavyweights in his massive congregations. Particularly during the elections, the leaders who sit on the dais of his prayer meetings would be the who’s who of Dravidian politics — from the MDMK’s V Gopalsamy (Vaiko) to the DMK’s MK Stalin.  Such a powerful voice in the Christendom of south India, the evangelist wrote immediately after the tragedy in his official magazine the following:

On December 26 2004 the earthquake that occurred in the sea near the island of Sumatra in Indonesia created tsunami the giant tidal waves which caused huge disaster in the countries like Indonesia, SriLanka, India, Thailand and Malaysia. More than 11/2 lakh people have died…Two grave sins grieve God the most. One is Idolatry and the other is Adultery. These two sins alone will bring curses and disasters to the nation. Look at our nation the land is grieving due to the curse of sin. …Instead of worshiping the God who created heaven and earth they worship demons and evil spirits as their God.[1]

Immediately after the tsunami, which killed scores of people at the Vellankanni shrine, an urban legend of St Thomas’s miracle was unleashed with extraordinary quickness by the Catholic Church. St Thomas Pole, the structure in question, has a myth fabricated around it, which has more to do with the Portuguese borrowing the associated legend from Puri Jagannath rather than the mythical St Thomas himself. More nuanced than the crude statement made by Mohan Lazarus, the bishop who spread the story was cautious and at the same time unscrupulous in exploiting the tsunami for a miracle.

Bishop Raj’s miracle stories were introduced through various media, intitally in the national newspaper New Indian Express, Chennai edition on January 4 2005, in an article written by Susan Muthalaly titled “Santhome Miracle”. This story was further disseminated on the Internet in an article titled “How Tsunami Waves Did Not Touch Santhome Cathedral”(January 4 2005). In addition, many other Catholic sites quoted this, carrying this propaganda further. However the Bishop himself does not say whether the story is true or false.[2]

If Christian propaganda mills were giving a theological interpretation to tsunami, the Communist Party of India (Marxist) [CPI(M)] did not hesitate to give a political twist to the human tragedy. After some solemn sentences of pity the editorial of the official organ of the party informed its readers:

The tsunami striking us in the last days of 2004 must be seen not as an ominous signal for the future, but as the culmination of a legacy of hate and destruction that we, the Indian people, unitedly and finally overcame in the political sphere in 2004.[3]

So the tsunami was the culmination of the legacy of NDA — which was elected by the very same people suffering from tsunami! In other words, if the evangelist says that tsunami came because Hindus worship idols, the Commissar of the CPI(M) says the tsunami of 2004 was the culmination of the sins incurred by Indian people because they elected NDA in 1998.

And along there was the evangelical onslaught unleashed upon the traumatised brown-skinned heathens.

If one looks at the website of Action India, there is nothing that will inform the viewer of its relation to evangelical industry. However, ‘Reach Beyond’ ministries website informs us that “Action India team leader Devendra Rai is coordinating a team from northern India and Cambodia which will serve with India Gospel Outreach’s ministries in Tamil Nadu in southern India”.[4]

Gospel for Asia (GFA), another huge commercial evangelical empire, saw the tsunami as “one of the greatest opportunities God has given us to share his love with people”. The sharing of this ‘love’ had been done in unscrupulous ways. For example, in the coastal village of Akkaraipettai, GFA and their associates ‘Believers Church’ had set up an orphanage without the knowledge of the government. CD Suriyakala, professor and head of electronics and communication department at the Sathyabama University, Chennai, discovered to her horror that 108 children, mainly Hindus, had been taken to the orphanage and compelled to recite Christian prayers six times a day. GFA were quick to deny the charges including the giving out Bibles in the relief camps.[5] However, elsewhere KP Yohannan, the founder president of GFA, had proudly admitted that his 14,500 missionaries had indeed distributed Bibles and evangelical pamphlets to already traumatized tsunami victims.[6]

If one needs to understand how Christian evangelism using the trauma of natural disasters diminishes the human dignity, one just has to read the following account by a Western evangelist describing how their Indian middlemen for the souls operate:

In the fishing town of Nagapittinam, we encountered an elderly woman who had lost everything. The tidal wave had killed her family, crushed her house, and shattered her livelihood. … Prema Sunder pressed a few coins into the woman’s hand and whispered, “Buy yourself a cup of hot coffee.” The woman looked up. Tears began to well in her eyes. Soon she was talking about her broken life and her shaken Hindu faith. Growing up in Nagapittinam the woman had followed Hindu tenets her entire life. She was entrenched in a dogmatic belief system of idol worship and mandatory offerings. As a child she had been strictly warned that Christianity was a taboo religion.  Yet because Prema had offered a compassionate cup of coffee the woman was now open to the Christian message.[7]

Southern Baptist news web portal announces in 2009 how 2004 tsunami has been effectively used by the SB missionaries for proselytising:

Since the 2004 tsunami, Southern Baptists have found opportunities to meet both physical and spiritual needs of those who survived the disaster. More than 4,000 people along the coast of India and into Bangladesh have professed faith in Christ and more than 1,400 churches have been started.

Elbridge is one of the 5,500 overseas Baptist missionaries, and he is working in the tsunami-devastated coastal village of Tamil Nadu. He boasts that his work taking advantage of the tsunami-trauma had yielded harvest:

“100 people accepted Christ as Lord and Saviour, 35 were baptised and about 12 house churches were started.”[8]

Such statements do not bring forth the kind of mental agony that the evangelism causes to the tsunami survivors at the ground level. The following is from an ANI report filed within three weeks of tsunami:

Samanthapettai, near the temple town of Madurai, faced near devastation on the December 26 when massive tidal waves wiped it clean of homes and lives.Most of the 200 people here are homeless or displaced, battling to rebuild lives and locating lost family members besides facing risks of epidemic disease and trauma.Jubilant at seeing the relief trucks loaded with food, clothes and the much-needed medicines the villagers, many of who have not had a square meal in days, were shocked when the nuns asked them to convert before distributing biscuits and water.Heated arguments broke out as the locals forcibly tried to stop the relief trucks from leaving. The missionaries, who rushed into their cars on seeing television reporters and the cameras refusing to comment on the incident and managed to leave the village.[9]

These were reports that appeared in the national media. Just reports and nothing beyond that! No editorial condemnation or expression of righteous anger. Rampant evangelism that shamelessly used the human agony of tsunami was done right when the UPA got into power. Yet there was not a single op-ed in national newspapers, not a low decibel murmur in the high voltage chat-shows of the media networks. Even the inhuman statements that tsunami was a retribution from the Christian god to punish the idol-worshipping Hindus made by a powerful evangelist with secular political connections went unchallenged by the media. Whatever alleged excesses that happened in the Ghar Wapsi programme of the Vishwa Hindu Parishad (VHP) pale into insignificance at such a ruthless exploitation of a global tragedy to further the religious conversions.

In the aftermath of the tsunami, the Rashtriya Swayamsevak Sangh (RSS) and associated organisations went into action to retrieve the bodies of the victims of tsunami without caring for their religion. They made sure the bloated bodies of our brethren got a decent burial or cremation that their human dignity deserved. But what about retrieving the human dignity of lives lost to the unethical evangelical tsunami?