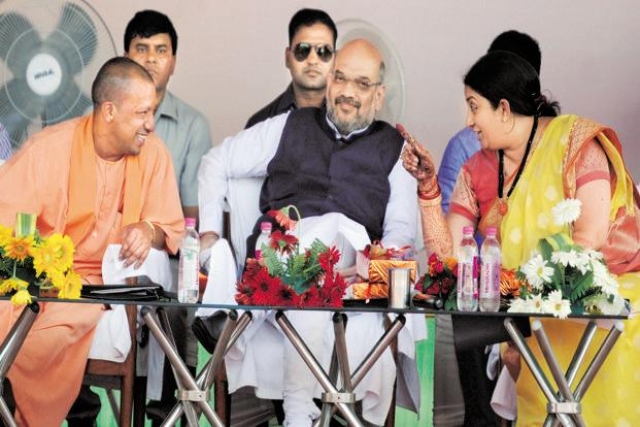 For a layman, elections to the Greater Hyderabad Municipal Corporation (GHMC), scheduled on 1 December, could be just another event but not for the Bharatiya Janata Party (BJP).

The party, which is ruling at the Centre, has caught its supporters by surprise by bringing in many heavyweights to campaign for GHMC elections in which the stakes seem to be high for it.

Having already brought in former Maharashtra chief minister Devendra Fadnavis and young Lok Sabha member from Bengaluru Tejasvi Surya, it plans to bring in more heavyweights to the Telangana capital.

Union Textiles Minister Smriti Irani and Information and Broadcasting Minister Prakash Javadekhar are already on the rounds seeking votes for the party’s candidates.

Union Minister of State for Home Affairs Kishan Reddy, who has been actively campaigning in the state capital, put the BJP’s strategy succinctly: "GHMC today and assembly elections tomorrow."

According to BJP insiders, the party’s strategy is simple, particularly on the heels of winning four Lok Sabha seats in Telangana last year and the byelections to the Dubakka Assembly constituency early this month.

According to Sriram Karri, author of Autobiography of a Mad Nation, BJP’s nail-biting victory in the Dubakka bypolls has changed Telangana politics with the national party viewing it as the second southern state to form a government, after Karnataka.

The BJP’s surge in the state has made TRS and KCR nervous that the latter has called for a conclave of all opposition parties barring the Congress to take on Prime Minister Narendra Modi.

There are two other reasons why the BJP has upped its stakes in the GHMC elections apart from the above reasons. One, it sees GHMC elections as a forerunner to the state assembly elections due in 2023-end.

Party insiders say that the BJP has positioned itself as a strong contender for power in the State to replace TRS and KCR, and the GHMC elections will help it to test the waters.

Towards this end, the party has received a booster shot in the victory it got at Dubakka. BJP’s victorious candidate from the constituency M Raghunandan Rao has said that his victory would inspire the party to do well in the GHMC polls.

The GHMC elections are the BJP’s attempt to spread its footprint further south through Telangana, particularly where the Congress and Telugu Desam Party seem to rest happy with whatever they get.

Hyderabad could be BJP's gateway to Telangana and observers say the GHMC poll campaign is more of an “ideological battle”. It is even talking of renaming Hyderabad as Bhagyanagar.

The second reason, as a BJP insider said, the party is going all out in the GHMC elections to break the alleged nexus between KCR and All India Majlis-e-Ittehad-ul-Muslimeen (AIMIM) chief Asaduddin Owaisi.

“There has been a secret understanding between them. That needs to be either brought to light or broken,” an insider, who did not wish to be identified, said.

There is also another opinion that the BJP is perhaps trying to show Owaisi his place, particularly after he offered to enter into an alliance with Trinamool Congress (TMC) in West Bengal, where elections are due in six months time.

The TMC, which has won the last two assembly elections, seems to be in trouble this time and Owaisi is keen on AIMIM contesting from Muslim-dominated areas.

His view follow his party's good performance in Bihar elections, where it seemed to have spoiled the chances of the Mahagathbandhan in a number of seats and tilted the scale in National Democratic Alliance’s favour.

Referring to this, Surya told the media that "It's because people vote for Owaisi in Hyderabad that he is able to contest in Bihar. It's important to defeat him here.”

The BJP is attempting to stop Owaisi in his tracks here and prevent AIMIM's expansion in Maharashtra and Bihar besides Bengal.

This is the reason the BJP seems to be brimming with aggression in GHMC against AIMIM and TRS, particularly with Hyderabad being Owaisi’s stronghold. The aggression has led to its leaders invoking "Jinnah" and demanding "surgical strikes” on Hyderabad in their speeches.

For the TRS, the GHMC polls is seen as a prestigious one with KCR’s son K T Rama Rao saying his party would win 100 of the 150 votes at stake.

The party could, however, be up against the disadvantage of the October floods exposing its shortcomings in carrying out development schemes.

The BJP, TRS and Congress have promised free drinking water supply to the city, while the saffron party has promised free vaccine to tackle novel coronavirus.

Opinion polls have come up with varied findings with the maximum seat the TRS is likely to win at 85, while almost all of them see the BJP winning nearly 30 per cent of the votes.

Come 4 December when the results will be announced, we will get to know how far the BJP has progressed in Telangana.