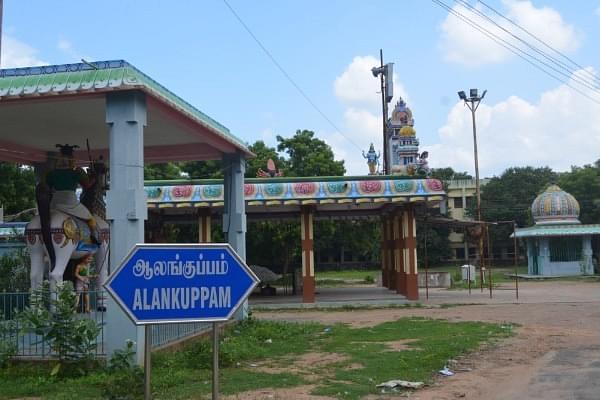 Alankuppam village in Puducherry, where some residents of Annai Nagar complain that they haven’t received government assistance to construct toilets.

“I have applied twice to the Puducherry government for assistance to build a toilet in my house. So far, I haven’t got a single paise. When I ask the government officials, they say I will have to wait and I will get it,” says Arjunan of Alankuppam village, which borders the famous Auroville.

Alankuppam, part of Puducherry’s Oulgrat Municipality, is some 170 kilometres from Chennai, off the Chennai-Nagapattinam National Highway past Tindivanam. Residents of Alankuppam’s Annai Nagar colony spoke to Swarajya about their wait to build toilets, and their experience reflected the common grievance across Puducherry.

Like Arjunan, 39-year-old Suganthi from Annai Nagar has twice filed an application seeking assistance to build IHHL but in vain. “Officials only say we will have to wait to get it,” she says.

Sixty-three-year-old Arunachalam has received Rs 10,000 to build IHHL. “I have finished constructing the latrine, but I am yet to get the full amount,” he says, posing for a photograph along with Arjunan.

Of the lot, Ramamurthy is lucky. “I got Rs 10,000 a year ago to build the toilet. I have finished constructing it, and last week I got the remaining Rs 10,000,” he says, offering to show the IHHL he constructed for his family at the colony. A neighbour of his is hopeful that he will get his balance of Rs 10,000 this week.

About 150 families live in Annai Nagar, and most of them belong to the Scheduled Castes. Residents there say some 20-22 families have received Rs 10,000 as initial money to build IHHL, and a couple of them like Ramamurthy have got the full amount.

“There are a few houses that have had toilets well before the scheme was introduced,” says M Sekhar, pointing at a neighbour’s house. “But we all constructed only now after the Modi government announced the scheme. I have got Rs 10,000 and I am waiting for the rest of the amount, though I have completed construction,” he says.

A resident of Annai Nagar, who did not wish to be identified, says he had constructed IHHL a year ago and is yet to get the balance Rs 10,000. “While nearly 22 Scheduled Caste community members have got the allocated money for IHHL, not many from the Backward Classes have received assistance from the government,” the resident said.

But Ramamurthy contests the claim, saying some 10-12 Backward Class families have got assistance to construct IHHL at another colony close to Annai Nagar. Alankuppam, which no one can miss with its huge Sri Angala Parameshwari Temple idols at the border, was in the news in March this year. Lieutenant Governor Kiran Bedi visited the village to rejuvenate its lake and prevent open defecation around it. The Puducherry government’s record in achieving Swachh Bharat Mission targets speaks for itself.

This report in January said the Union territory’s sanitation coverage in rural areas is 49.2 per cent – the fourth lowest among all states and Union territories in the country. More importantly, household toilets have increased only 3.62 per cent since the mission was launched in October 2014.

“The problem with Puducherry is that funds allocated under various central government schemes are being diverted for other purposes, mainly to pay salaries for the government staff,” says C Vetrriselvame, who works with a non-government organisation in Puducherry. “The previous N Rangasamy government and the current one headed by V Narayanasamy have recruited government staff without due sanctions. As a result, many of them haven’t got salaries for months. So, fund allocations under various central government schemes are being diverted to pay salaries,” he said.

A former Congress legislator of Puducherry, who did not want to be identified, said Rangasamy, Narayanasamy, and their ministers have been appointing their supporters in government jobs.

“The situation is such that Puducherry has more government staff than neighbouring Tamil Nadu district of Cuddalore, which is far bigger in size compared to the Union territory. These people don’t do anything, but get paid just sitting at home for being ministers’ supporters,” the former legislator says. It is because the staff don’t do any work that they are ready to wait for months together to get their salaries. “Some of them haven’t got salaries for nearly four years,” adds Vetrriselvame.

The problem with the Narayanasamy government in Puducherry is also that it is ruled by the Congress party. “Narayanasamy is supposed to be very close to the Gandhi-Nehru family. He wouldn’t want the Modi government at the Centre to get any credit. That is also a reason why the Union territory is not keen on executing any central government scheme,” says the former legislator.

Another example of such tardy implementation, he points out, is the Mudra scheme to help small businesspersons. “The Narayanasamy government is not interested in promoting this scheme. I myself have recommended many for loans under the scheme and the government is slack,” he says.

A Puducherry local, who did not wish to be identified, said there were other reasons, too, for the Union territory government not funding IHHL properly. “Some people took money to construct IHHL and spent it on liquor. When officials visited to check the progress, they staged protests,” he said. The former legislator agree that people not utilising the funds for the purpose that they got it was another reason for the tardy progress. “You get all brands of liquor in Puducherry. And many men here drink and waste their money on liquor,” says Vetrriselvame. He said that some local officials and legislators were working hand in glove for this diversion of funds.

An official at the Oulgrat Municipality Commissioner’s office said that so far the civic body has approved the construction of 1,175 IHHL against 2,560 applications received so far within its jurisdiction. “At least 1,000 people have taken money for constructing toilets, and cheated. We will be taking action soon against them,” the official said on a condition of anonymity.

The official said Puducherry has now revised its plan to meet the IHHL and Swachh Bharat Mission targets by October 2019, but added, “we are unlikely to meet the targets”. He refused to elaborate further.

Asked about providing funds to the remaining applicants, the official said they would have to first make accountable those who have not constructed toilets after availing of funds. “Our government is not providing funds, asking us what is the guarantee that the rest won’t cheat like the 1,000 who have misused the funds,” he said.

The former legislator said the Narayanasamy government was coming up with excuses to deny the benefits of government schemes to its people. “This will also ensure he doesn’t help Modi government execute its schemes,” he added. In April this year, Lieutenant Governor Bedi announced that distribution of free rice to the poor will be discontinued if their villages are not free from open defecation and garbage. But after a hue and cry was raised, Bedi withdrew her announcement, saying her intent was being misread and misrepresented. The Lieutenant Governor said she would be given more time. But given the state of affairs in the Union territory, it is unlikely that Puducherry will make the desired progress on Swachh Bharat Mission.

In view of misreading of my intent to improve d living conditions of rural poor & in view of assured commitment that rural areas will be Open defecation free by June 2018,
I have clarified my earlier communications to put at rest any misgivings.Tom shall b my 156, weekend round.