Will Kumaraswamy Get To Play Kingmaker in Karnataka? 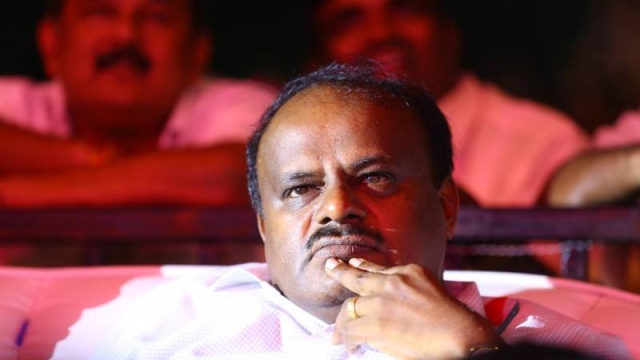 If one pre-election survey is anything to go by, he may be playing ‘kingmaker’ rather than being the chief minister himself.

While the Janata Dal (Secular) state president has been vocal about his dissatisfaction with both the Congress and the Bharatiya Janata Party (BJP) in the state, he is confident about "winning 60-70 seats even without any efforts". Interestingly, the party's campaign focusses clearly on Kumaraswamy's chief ministerhood but not the party's reign in the state.

So, do we smell the possibility of a coalition between JD(S) and either of Congress or the BJP? While Kumaraswamy has been vociferously vocal about his criticism of both the national parties, JD(S) supremo, H D Devegowda, is toeing a different line, and even complimented the present chief minister of late.

Does that say something about a possible post-poll alliance to keep a common enemy out of power?

That is possible only if the state has a hung assembly like it did in 2004.

The BJP and its allied had won 84 seats. The Congress, only 65 of the 224 it contested. This is when the “kingmaker” Kumaraswamy dominated the state’s political field, first joining hands with the Indian National Congress and forming a coalition government, and then withdrawing support and going on to form an alliance with the BJP.

But that too was not to last long. It collapsed owing to disagreements over sharing of power, ultimately leading to President’s rule in the state, following which fresh elections were conducted in 2008. This saw the BJP single-handedly come to power in the state.

Both the coalitions that the JD(S) ‘enabled’, failed. And, the elections that followed saw the BJP (2008) and the Congress (2013) form governments independently having won a clear majority of 110 and 122 seats respectively.

Some of the pre-poll surveys by different agencies suggest the possibility of history repeating itself with a hung assembly in Karnataka. C-fore for instance, predicts that no party will win a majority. The JD(S), as per C-fore, will trail behind the Congress and BJP>

Another survey conducted by AZ-Suvarna News, also talks of a hung assembly, with both the national parties gaining around the same number of seats, and the Congress said to possibly win around 74 to 93 seats and the BJP 77 to 92.

While the C-Fore survey predicts 24-30 seats for the JD(S), the AZ-Suvarna News survey pitches it at 43, which is around the same number it won last elections (2013).

But Kumaraswamy has dismissed such numbers saying that his party would definitely cross the hundred mark. He has been criticising both the national parties and looks forward to not having to join hands with either of them. "My aim, however is to secure minimum 113 seats so that the party does not negotiate with anyone to form the government,” he said. Though the party is fielding candidates from all constituencies, its focus is on 170 of the total 224.

Readers may note that the JD(S) is now actively promoting itself as a party of the minorities in the state, what with a minorities' meeting at Tumkuru yesterday (10 December), and Dalit Mahasabha planned on Wednesday (13 December). Kumaraswamy has already announced that if his party comes to power, he will make a Dalit or a Muslim deputy chief minister, as reported by The Times of India.

JD(S) is also anticipating defections to itself. This year, though, has seen many a rebel JD (S) leaders jumping to either of the national parties, contending issues with the party’s dynastic setup.

Also, given that this is the first time that the state will go into elections post the Modi wave striking the country, one cannot rule out a saffron surge, as was earlier predicted by another poll which gave 113 seats to the BJP, with Congress trailing at 86 and the JD(S), a dismal 25. The poll conducted by the Creative Center for Political and Social Studies (COPS), said to be hired by the BJP, contrasts the results of the C-Fore survey, which is said to be sanctioned by the Congress.

But, if the AZ-Suvarna News survey is anything to go by, and the two national players fail to work their charm, Kumaraswamy may well get to enjoy power without any burden of responsibility.