Women Athletes: Activists Blame Government For ‘Bad Shoe’, Truth Is Government Has Been More Than Supportive 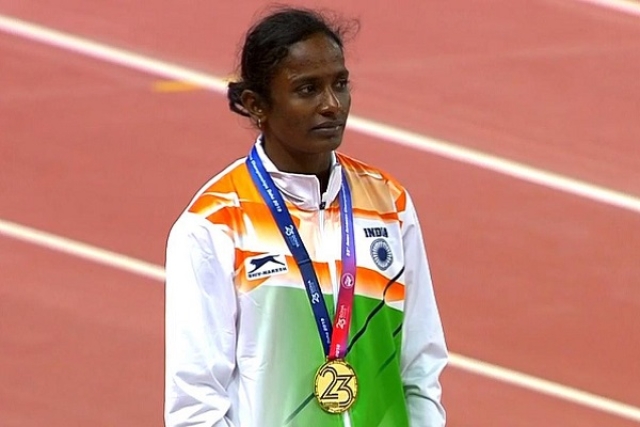 Gomathi Marimuthu’s victory in women’s 800 metres race at the Asian Athletic Championships in Doha, Qatar, last month has once again reiterated the truth in the saying “success has many fathers and failure is an orphan”.

Soon after Gomathi won the event, some political parties and vested interests in Tamil Nadu utilised the opportunity to run down the Narendra Modi government at the Centre and the Edappadi K Palaniswami government in the state.

What these critics wouldn’t know is that Gomathi wouldn’t have made it to the Doha event had Tintu Luka, India’s first choice for the event, not decided to retire from sports all of a sudden.

Tintu Luka has won quite a few medals in 800 metres for India and has a better timing of I minute and 59.17 seconds in the event. Gomathi was included as a provisional candidate and finally made it to Doha after making the cut at a trial event.

This in itself is proof that the government did not ignore her as alleged by a few critics. On the other hand, Gomathi herself in an interaction with the media said that coach J S Bhatia had given her a schedule for training despite she not making it to the camp that began in October last year. (Tintu Luka’s decision to retire came in March after the injury on her heel aggravated.)

This suggests that the opposition and the critics were looking for an opportunity to discredit the government. So, soon after the news of her victory was flashed, the critics began pointing out at her torn shoes.

“Government extended no help to Gomathi and she ran wearing torn shoes,” screamed these critics. Soon after landing in India, Gomathi clarified that she chose to run in her old, torn shoes since she considered it as a lucky one. She clarified this in an interview to the Press Trust of India.

The opposition, in particular, wouldn’t budge. So, many rushed to become her patrons. The Dravida Munnetra Kazhagam (DMK) came forward to present her with Rs 10 lakh, while the Tamil Nadu Congress (I) Committee gave her Rs 5 lakh.

Under pressure from these two parties, the ruling All India Anna Dravida Munnetra Kazhagam (AIADMK) presented her a cheque for Rs 15 lakh.

No doubt, Gomathi’s story so far has been one of struggles. Can an individual or a government be blamed for this? But, DMK and its allies appear to hold the central and state governments responsible for the mess that Gomathi was in until now.

The very fact that the athlete made it to Doha and took part in her favourite event is proof enough to call the bluff of these opposition parties. DMK, which was the first to politicise the victory and even roped in the Tamil film world, should know better.

If Chennai enjoys good sports infrastructure today, it is because of late J Jayalalithaa’s decision and resolve to hold the South Asian Federation Games in the city in 1995. It was purely due to her efforts that Chennai got world-class stadiums for athletics, swimming, tennis and hockey.

The AIADMK’s track record in encouraging sports and tapping talent is unmatched by any other party in Tamil Nadu. If that is the case with the state, then at the Centre no other government has given importance to sports and games like the current Narendra Modi dispensation.

For the first time, an Olympic medallist — Rajyavardhan Rathore — was given the job of heading the Sports Ministry. Before that, his predecessor Sarbananda Sonowal, who left the Centre to become Assam Chief Minister, too had left his mark.

Acknowledging various influences in her life, Gomathi said Santhi Soundararajan, who was stripped of the 2006 Asian Games medal, was one of her inspirations. Santhi won the silver medal in 800 metres at the 2006 Doha Asian Games but she was soon disqualified and stripped of the medal.

The reason for stripping Santhi of the medal was, according to the games authorities, she “did not possess the sexual characteristics of a woman”. Prior to her disqualification, Santhi had to undergo much humiliation as she was forced to stand naked for more than half a day for physical examination amidst 11 male doctors.

Santhi was not aware that she was undergoing a sex test and not a single Indian official was at hand to help her. She didn’t know the language the doctors, who were of different nationalities, spoke.

Problems for Santhi compounded as the Amateur Athletics Federation of India (AAFI), too, stripped her of all the medals she had won earlier even at the national level.

The poor athlete was denied any help by Union and state governments and she was left a pauper. Lalit Bhanot, an accused in the Commonwealth Games scam and who headed the athletics federation then, refused to step in to help her. He reportedly told her that she couldn’t “do sports anymore”.

The DMK was in power in Tamil Nadu then and was an active member of the United Progressive Alliance (UPA) government led by Manmohan Singh at the Centre. Why didn’t the DMK and Congress help this Scheduled Caste athlete hailing from a remote corner of southern Tamil Nadu?

No efforts were made to provide relief to her. Nor did those in power then protest against the way Santhi was humiliated and insulted. It all resulted in Santhi retiring to a far corner in Pudukkottai district and turning into an ordinary worker at a brick kiln.

Succour for Santhi came after her case was taken up by activist Gopi Shankar, who wrote about her tribulations in this article in Swarajya. While Santhi moved the court, one of Bharatiya Janata Party leaders in Tamil Nadu, Vanathi Srinivasan, met Santhi. The BJP leader also gave her Rs 50,000 that was collected for her welfare.

Santhi’s case was also taken up at the Centre with Sonowal, Union Minister for Transport Pon Radhakrishnan and current Sports Minister Rathore. She drew a blank response from the bureaucrats then.

In June 2014, soon after the Modi government assumed charge, a young Odisha athlete Dutee Chand, hailing from a poor weaver’s family, was not included for the Commonwealth Games despite a sterling performance after the International Amateur Athletics Federation (IAAF) reported that hyperandrogenism made her ineligible to compete in athletics.

India’s case in support of Dutee Chand was upheld and since then the Odisha athlete has won quite a few medals in 100 m and 200 m events.

It is because of the efforts to encourage women athletes and sports women that we are seeing so many success stories among them.

The 2018 Commonwealth Games at Gold Coast, Australia, and Asian Games in Jakarta, Indonesia, saw women playing a dominant role for India reaping a rich haul of medals. Indian women have done exceedingly well in boxing, wrestling, weightlifting, badminton and shooting in recent years with these athletes getting access to world-class facilities, including coaching.

Rathore himself has been visiting and inspecting the facilities to ensure that the athletes face no discomfort — something that no sports minister has ever done before. Besides, identified talents are allowed to either go abroad for training with coaches of their choice or participate in tournaments to gain valuable experience.

The Centre has also doubled the pension for medal-winning sports persons in international meets to between Rs 12,000 and 20,000 a month, while the Sports Ministry set out to spot young talents by hosting ‘Khelo India’ for schools.

Thanks to Khelo India games, nearly 1,500 athletes have been identified as potential talents and they have been covered by a scholarship programme to help them in their development. The scholarship covers expenses towards coaching, playing tournaments and out-of-pocket allowances.

The government has been proactive in promoting sports and games in the country with an emphasis on women’s development. Such being the case, the efforts of parties like DMK and Congress to run it down despite Gomathi’s success are not in the right spirits. It would be worthwhile if these parties can look back at their own role in supporting sports when they were in power.