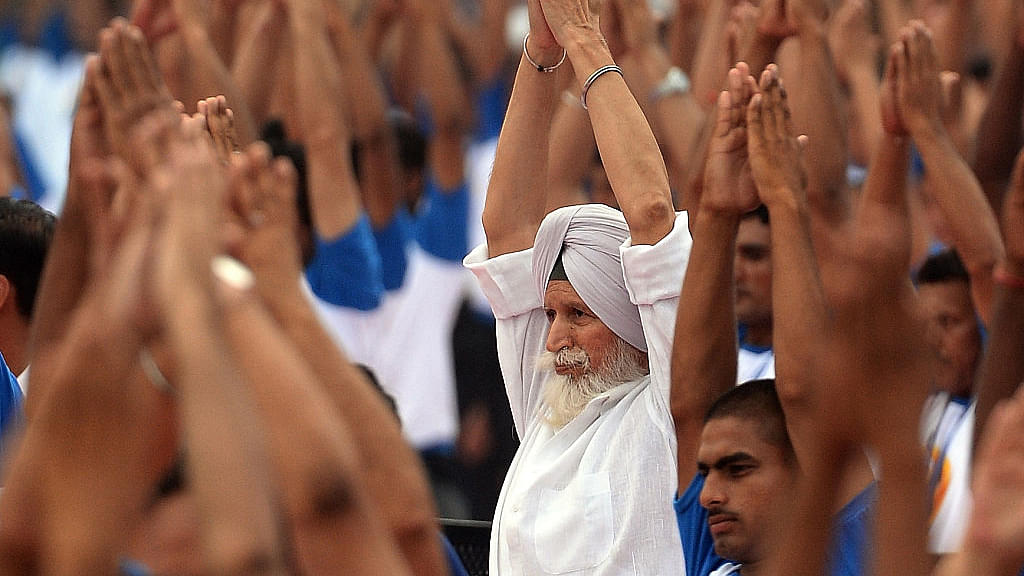 In his speech at the UN, while appealing for instating such a day, Prime Minister Modi’s reference to yoga was made in the context of climate change and going back to basics. He said:

“Yoga … embodies unity of mind and body; thought and action; restraint and fulfilment; harmony between man and nature; a holistic approach to health and well-being. It is not about exercise, but to discover the sense of oneness with yourself, the world and the nature. By changing our lifestyle and creating consciousness, it can help us deal with climate change.”

Yoga as a way of life to ‘heal the planet’ may appear far-fetched at first glance.

Much criticism had started flowing in from the usual quarters after he gave his speech. For instance, Sohail Hashmi, who is an academic and activist from the Left, had said:

But in his speech, Modi had tried to take yoga from a form of physical exercise to a way of life, a spiritual philosophy. He is not the first to see solutions to the problems of modern times in yogic philosophy and culture.

Indian philosopher, yogi, and guru Sri Aurobindo thought yoga encompassed ‘all life’. He wrote in his published work The Supramental Manifestation and Other Writings:

The yoga we practice is not for ourselves alone, but for the divine; its aim is to… effect a spiritual transformation and to bring down a divine nature and a divine life into the mental, vital and physical nature and life of humanity.

Even Mahatma Gandhi had elaborated on the importance of the cardinal principles of Yamas and Niyamas in the Yogasutras of Patanjali in forging the tool of Satyagraha and envisioning the upliftment and Sarvodaya, welfare of all, as pointed out by Dr Ajay Shanker Rai, a noted Gandhian scholar. Such strands of thought can be observed across many of our cultural and social habits.

India at the top of Greendex

The National Geographic conducted a transnational survey for over six years from 2008 to 2014 that computed something called the ‘Greendex’ - a measure of the environmental impact of a person’s consumption patterns.

In the crucial area of food consumption, the six-year study revealed the following:

- They are less likely to consume beef or pork than consumers in other countries that were surveyed.

- Indians are among the most frequent consumers of fruits and vegetables.

It is the values of restraint inherent in Indian culture that has led to these eco-friendly food habits. One should note that it is not rigid, dogmatic vegetarianism but the intrinsic culture-based controls in meat consumption of non-vegetarians that makes the system green-friendly. This, in turn, relates to the core yoga values that have shaped the cultural and social life in India, namely moderation in consumption and self-reliance rather than the squandering of external sources.

In other areas of life, too, like indigenous building technologies or water management systems, these core values come into focus. What’s interesting to note is that these values have evolved indigenously over time rather than imposed through scripture or State.

Sri Aurobindo and his spiritual collaborator, The Mother’s (born Mirra Alfassa) movement with its roots in ‘Integral Yoga’ and emphasis on futuristic humanity made some of the boldest experiments in blending Indic knowledge systems with the science of ecology.

The ‘Auroville charter’, drafted by The Mother, speaks of ‘taking advantage of all discoveries from without and from within’, in order to ‘boldly spring towards future realisations’. Today, Auroville is at the heart of the largest solar power installation in India. It is one of the foremost hubs in disseminating innovative renewable energy technology. It is this inner-outer connection that Modi spoke about at the UN.

Thus it is neither a coincidence nor rhetoric that Modi associates yogic values with climate change and that the Nationally Determined Contribution (NDC) document of India at Paris, which assures that Indians will use 100 gw of solar power by 2022, begins with a hymn from Yajur Veda: “Unto Heaven be Peace, Unto the Sky and the Earth be Peace, Peace be unto the Water, Unto the Herbs and Trees be Peace.”

So while yoga as a form of physical exercise is the most popular and easy way to introduce yogic values to the world community, the ultimate aim is to make the yogic way of life available to the world at large.

From Patanjali’s Yoga Sutras to Sri Aurobindo’s Integral Yoga, as well as Gandhi’s Anasakti Yoga and Swami Vivekananda’s Karma Yoga, India has constantly used the term ‘Yoga’ in the widest sense of the term - as a way of bringing welfare to humanity. The International Yoga Day celebrations must be seen in this context. Vedic seers declared the mission thus: Krinvanto Vishwam Aryam - to Make the World Noble.