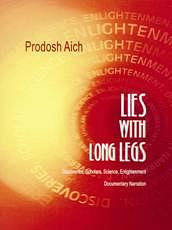 I came across this title last year while I was looking for a book on the Aryan Invasion Theory (AIT). There is plenty material exploring the scientific, geological, archaeological evidence debunking the theory. However I wanted something that examined those who proposed this theory, scrutinized their scholarship and saw how the theory held its own against such an examination. This book does exactly that and I am glad I came across this book.

Prof. Prodosh Aich embarked on a journey to find out who the “Aryans” were. Who the “Indo-Europeans” were who had given birth to the curious AIT theory and had launched a lucrative career industry, both in terms of money and awards, in Indology.

In his painstaking research spanning almost a decade Prof. Aich, along with those who assisted him, examine a breathtaking amount of material about (and by) almost every prominent Indologist, or anyone who claimed scholarship in Sanskrit and ancient Indian knowledge. The objective of this exercise was very simple. To put the alleged “scientific” scholarship to, well, scientific test. And much of the book is about how this scholarship holds up against such scientific scrutiny.

Among the people examined in the book include such luminaries as Max Muller, William Jones and Macaulay. What Prof. Aich finds is rather familiar to what we have seen happen in the scholarly circles of Marxist variety. The nature of their scholarship was anything but scientific. Prof. Aich encounters such techniques as disingenuity, progressive myth making, selective quoting, truth by repeated assertion, mutual admiration etc. And all of this went unchallenged in the “scientific” pursuit of scholarship in Indology.

Almost every Indologist who studied or wrote about India exhibited one common trait. They were all Jesuits. This is not a conspiracy theory but is abundantly clear from the writings, letters etc. as produced in the book, by the scholars themselves.

Another thing in common among almost all Indologists was their spectacular lack of knowledge of the language they claimed expertise in. Sanskrit. (See this post on Max Muller). By the time these European Indologists started writing about or visited India, Sanskrit had vanished from daily life in India. It was confined to the Brahmins who preserved ancient Indic knowledge through the oral tradition of reciting Sanskrit hymns handed down through the generations.

The Indologists found it difficult to gain access to this critical knowledge owing to obvious cultural and language differences as well as obvious apprehensions the Brahmins had in allowing access to hymns. So the Indologists compiled a rudimentary Sanskrit dictionary from whoever they could talk to and this formed the basis of their scholarship in Sanskrit.

The quality of this dictionary was naturally far from acceptable. The Indologists transcribed whatever they could lay their hands on and sent it back to European institutes where the field of Indology had begun flourishing. In the absence of any authoritative scrutiny or validation, what the Indologists passed was held valid. Thus took birth a “scientific” branch of scholarship. Indology.

The circumstance under which these Indologists either came to India or took up studying India is worth noting. Almost every scholar examined in the book was driven not by a hunger for scholarship but something else. They all were desperate to better their own financial situations. Writing was popular during their time and almost every other field was taken. “Oriental studies” was nascent and emerging. The budding Indologists sensed their chance to strike big here knowing there would be hardly anyone to put their work to test.

The Jesuit influence on the scholars and visiting luminaries like Macaulay meant that their supremist tendencies held Indic beliefs, knowledge in contempt declaring them wrong and invalid. The Indians had to be introduced to the “correct” belief system and saved from catastrophe. Macaulay designed his program for what Prof. Aich calls manufacturing “cultural clones”. (Covered in more detail here). These “cultural clones” were Indians with European minds. Indians uprooted from their own culture and moulded to be more like the likes of Macaulay. Our first Prime Minister was a product of this “cultural cloning” program and the results are all too evident now.

Put to scientific test, popular scholarship in Indology fails miserably. Prof. Aich uses nothing else but material, the writings, memoirs, letters, speeches and other such trails left behind by the scholars themselves. The hollow edifice comes crumbling down as do myths like the “Aryans” built upon “lies with long legs“.