A Science Journal Sets About Changing The Publishing Paradigm 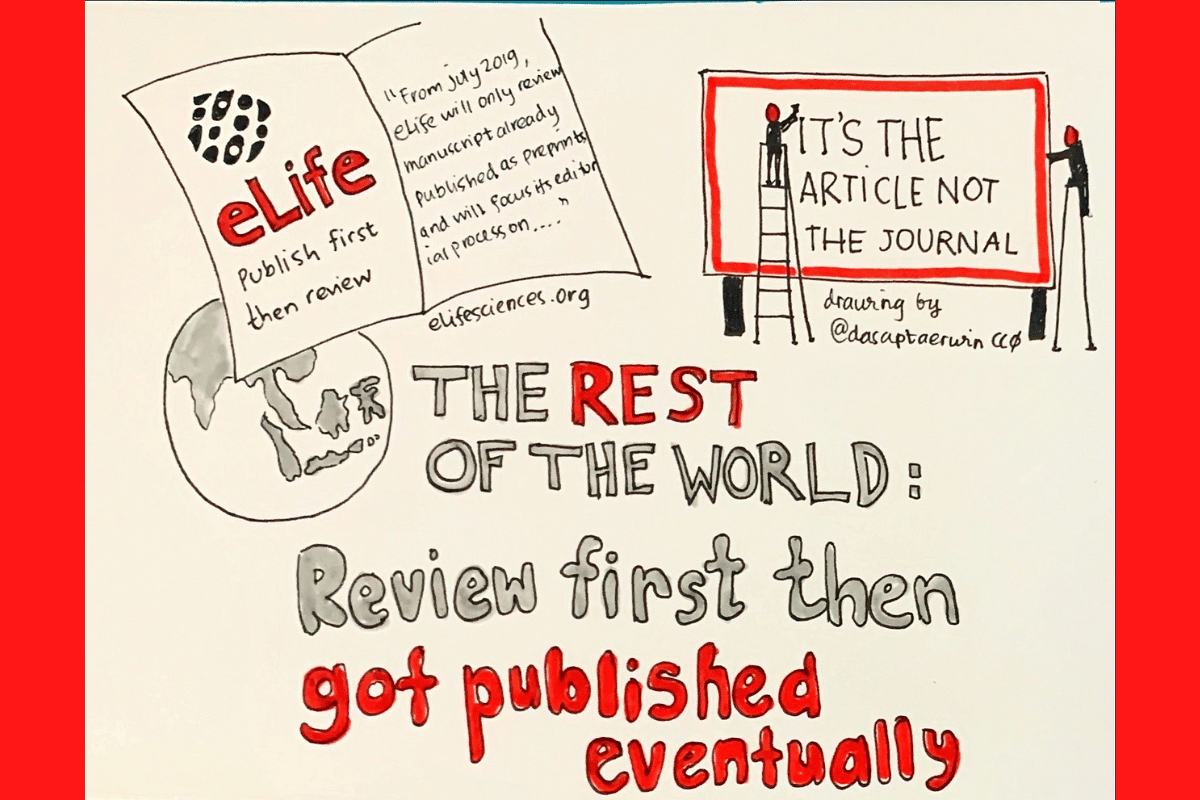 A science journal called eLife is pursuing a new model of publishing that breaks away from convention.

The non-profit, open-access journal, specialising in the life and biomedical sciences, wants to take the power away from journals and keep the focus on the science and scientists alone.

The major change is happening at the “peer review” stage, which is the independent evaluation of a manuscript — which details a particular research effort and its finding — by experts in the industry. More than two million papers are peer-reviewed each year.

While, traditionally, this peer review stage is opaque, slow (can take multiple rounds), and results in a monolithic “yes” or “no” decision on the publication of a submitted manuscript, eLife plans to do away with this approve-reject decision and instead publish the assessment of the peer review publicly.

“It’s the immediacy of preprints with the scrutiny of peer review,” eLife executive editor Damian Pattinson said in a press conference after announcing the change.

“The underlying premise is extremely simple: authors publish their own work as preprints, and journals publicly review these already published works. That's it. That's the system,” Michael Eisen, the editor-in-chief of eLife, summed up the change in a tweet.

Journals are often accused of being “gatekeepers” of new research, taking a call on what goes through and what doesn’t, assuming importance upon themselves.

In large parts of the world, the old-fashioned way of scientific publishing puts a lot more emphasis on where a paper is published than what the paper says.

“The job of journals is not to decide what gets published, but to create a useful layer of constructive public review that evolves as the work does,” Eisen explained in a tweet.

On 20 October, eLife announced that all papers that have been peer-reviewed will be published on the eLife website as “reviewed preprints” starting 2023.

The reviewed preprints will be accompanied by an eLife assessment and public reviews. They can be published online within a few weeks of the review process having concluded.

Keeping with the evolutionary spirit of scientific research, the authors will be able to include a response to the assessment and reviews as well.

Then, importantly, they can choose the next step — revise and resubmit, or declare either the original or revised paper as the final ‘version of record’, which will be equivalent to the final published paper in a conventional journal.

The game-changing move reflects the evolution of the medium over which scientific research is communicated. In the pre-internet era, publishers had to take a call on which research to publish with a view on the printing and distribution costs.

Since the internet is open, free, and widely accessible, that level of selectivity in publishing isn’t warranted any more; the internet has space for all.

“And the internet, you know, you can post a video on YouTube, or TikTok depending on how old you are, and you can share… anything you create with everybody else in the world instantaneously. It makes absolutely no sense to not do that with scientific research,” Eisen said in an eLife interview.

This will take away the significance of the journal in which a study is published, even if that journal is eLife. “The fact that a paper is reviewed by eLife under this new model will convey no useful information to anyone. But the peer reviews will. That's the whole point,” Eisen tweeted.

Thus far, eLife charged authors $3000 if it accepted their paper, which is free to read after publication. Under the new model, authors will be charged $2000 if they accept the publisher’s offer to have a submitted manuscript undergo peer review.

eLife’s change of approach to publishing isn’t sudden — far from it. In 2020, the journal had initiated a “publish, then review” model, upending the traditional “review, then publish” model. eLife shifted to exclusively reviewing manuscripts that have already been posted as preprints, practically diluting its role as a publisher.

That scientists have increasingly taken to preprints as a way of sharing their work has further enabled this policy shift by eLife at this point in time — 10 years after the progressive journal got to work.

Over the last 18 months, eLife has published reviews of more than 2,200 preprints to bioRxiv and medRxiv, along with an editorial assessment of the significance of the findings and the strength of the evidence presented in the research.

Two years later, the move to abandon the accept-reject model came as a logical next step, according to Eisen.

“In choosing to no longer reduce our assessments to a single, eternal publishing decision, we are relinquishing the traditional journal role of gatekeeper in favour of a new approach that restores autonomy to authors and ensures that they will be evaluated based on what, not where, they publish,” Eisen et al wrote in an editorial for eLife.

“There is something quite liberating here: certainty of timing and outcome. Better for authors to decide whether, when, and how to react to reviewer suggestions than be in an interminable loop at the mercy of someone they may or may not agree with,” eLife board chair Prachee Avasthi said in a tweet.

While giving this model “a measured thumbs up,” Sophien Kamoun, a biologist at the Sainsbury Laboratory in the United Kingdom’s Norwich, recommended in a blog post that “eLife editors post their decision letter on the website independently of whether they send the article for external review.”

Here Kamoun refers to the stage before a preprint is picked to be reviewed publicly. eLife will have to make the choice of inviting a paper for peer review from the submission pool. “Desk reject decisions should be open and transparent,” Kamoun writes.

Striking a different note, Paul Bieniasz, professor of retrovirology at Rockefeller University, said “it is hard for me to see the changes at eLife as anything other than its demise.”

“The significant prestige enjoyed by eLife, built on the selective publication of high-quality work provided by many laboratories, including my own, is being discarded,” the virologist added in his critique of eLife’s new publishing model in Times Higher Education.

Bieniasz said his eighth paper, currently under review at eLife, will be his last one there.

eLife’s editor-in-chief says he is clear that he will need the help of the scientific community in transitioning from the old to the new, proposed way of scientific publishing.

“Our biggest challenge and our biggest, kind of, hope is that the community will help us get from where we are today to where we want to be, that they’ll see the value and advantages of doing it this way and realise that, you know, in order for this to work, we’ll have to break out of our comfort zone a little bit and start to try to do new things and embrace change in the way that scientists communicate with each other,” Eisen said in the eLife interview.

eLife’s Pattinson hopes “that many publishers will join us in creating a future where results are openly shared and reviewed and, in doing so, will give even more researchers the opportunity to participate.”