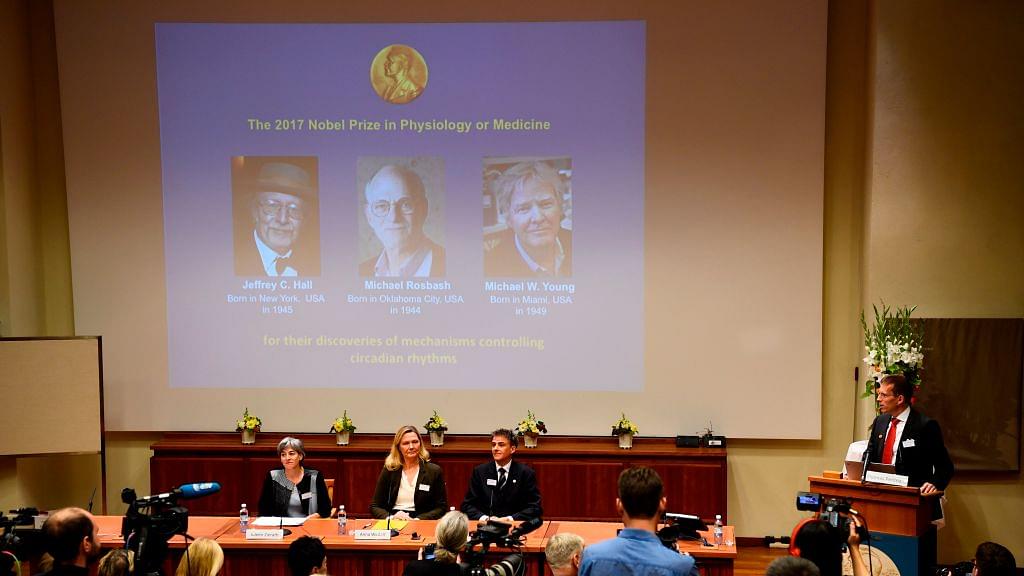 Winners of the 2017 Nobel Prize in physiology or medicine, from left, Jeffrey C Hall, Michael Rosbash and Michael W Young are pictured on a display during a press conference at the Karolinska Institute in Stockholm on 2 October. (JONATHAN NACKSTRAND/AFP/Getty Images)

With the Nobel Prize for Medicine or Physiology having been announced, there is a lot to rejoice, not just for the scientific community but for the common man also, because it helps us to develop a better understanding of how our body works. This year’s prize is shared among American scientists Jeffrey C Hall, Michael Rosbash and Michael W Young for their work on “molecular mechanisms controlling circadian rhythms”. This would be great news for researchers and students of Ayurveda, the Indian science of health, as it will directly resonate with what they know about the relation between the human system and the nature. Such findings give researchers of Ayurveda concrete modern frameworks to communicate their knowledge on global platforms. With chronobiology gaining prominence after these laureates’ work, it would be relevant at this time to draw parallels with what is mentioned in Ayurveda and the prize winning research. According to news articles and the summary provided in the official Nobel Prize website, some of the key findings of the research are as follows:

This Nobel Prize winning research work is based on the circadian rhythm, which refers to biochemical oscillators that respond to solar cycles. To quote Sir Paul Nurse, 2001 Laureate, “All plant and also animal behaviour is determined by the light-dark cycle. We on this planet are slaves to the sun”. Jeffrey Hall and Michael Rosbash discovered that PER, the protein encoded by period, accumulated during the night and was degraded during the day. Thus, PER protein levels oscillate over a 24-hour cycle, in synchrony with the circadian rhythm.

It is striking to note how Ayurveda establishes the link between the revolution-rotation of the earth and human health. According to Ayurveda, the different tridoshas (the three humors: Vata, Pitta and Kapha, in the body that need to be balanced for perfect health), are predominant during different times of the day. For instance, Pitta Dosha which controls digestion, metabolism and energy production is high between 10am and 2pm. Pitta ensures the availability of energy to perform various activities. This very well correlates with the high alertness, best co-ordination and fastest reaction times shown in the illustration below. Research works on circadian rhythm from the perspective of Ayurveda correlate the time of the day and hormonal activity, very similar to the degeneration of protein with the day as discovered by the laureates. For example, Kapha dosha is predominant in early phase of the day. Most of the hormones are at the peak level in the morning and they decline with the time and are lowest at the evening time.

According to The Guardian’s article, “There is some evidence that treatment of disease can be influenced by circadian rhythms too. People have reported that when you have surgery or when you have a drug can actually influence things. It’s still not clear, but there will almost certainly be some implications for the treatment of disease too.” This means that the time of the day when a medicine is had most likely influences its impact on the human body.

Ayurveda talks of bhaishajya kaala, which refers to the appropriate time for administering the aushada (medicine). Few research works on Ayurveda, published by Indian researchers, detail the impact of time of drug administration on the treatment of disease. Their research work mentions, “Kapha kaala is one-third part of the day, and later half of this one-third part is Kapha udreka gata kaala (past the excessive kapha). The medicine is administered in the empty stomach when the koshtha (digestive tract) is devoid of Kapha utklesha (aggravated kapha). Because if there is Kapha utklesha, the medicine will not come in contact with agni (digestive fire), and will not be digested properly and effect will be either delayed or reduced. Hence, medicine is administered only after the Kapha udreka is over”.

The key implication of the laureates’ work is that misalignment with the rhythm can cause health issues. It is fascinating to note how Ayurvedic texts address such misalignments caused by dissonance in a systematic manner and prescribe numerous preventive regimes. Dinacharya, an ayurvedic concept, maps the light and dark cycle of the day to human activities. Several Ayurvedic texts detail the list of activities that one can perform during different times in the day for robust health. Ayurveda in fact goes beyond the daily cycles, and elucidates the role of the changing seasons as well.

The first few chapters of the various samhitas (of Ayurveda) are dedicated to ritucharya, which talk about the relationship between human health and seasonal changes (which are caused by the revolution of the earth and tilt of the earth’s axis). Charaka samhita, for instance says, “Tasya shitadiya ahaarbalam varnascha vardhate. Tasyartusatmayam vaditam chestaharvyapasrayam,” meaning ‘knowing the suitable diet and regimen for every season and practicing accordingly enhances the health of a person’.

Hall, Rosbash and Young’s work furthers the research on the chronobiology by identifying specific genes at work. According to the Independent, “The work didn’t reveal any tips for regulating our own circadian rhythm or improving sleep, said experts. But it was a reminder of the importance of doing so …”. Their phenomenal research work has left us at an important juncture, where solutions need to be explored. Interdisciplinary and integrative research that blends insights from Ayurveda and modern medicine could probably offer solutions.

Smrithi Adinarayanan is the founder of Anaadi Foundation. She was formerly a faculty of computer science and an EdTech researcher. She can be reached at smrithi@anaadifoundation.org.

Varalakshmi Lakshminarayanan, a former software professional, is a member of Anaadi Foundation. She can be reached at varalakshmi@anaadifoundation.org.