Why Indian Science Congress Has Outlived Its Utility 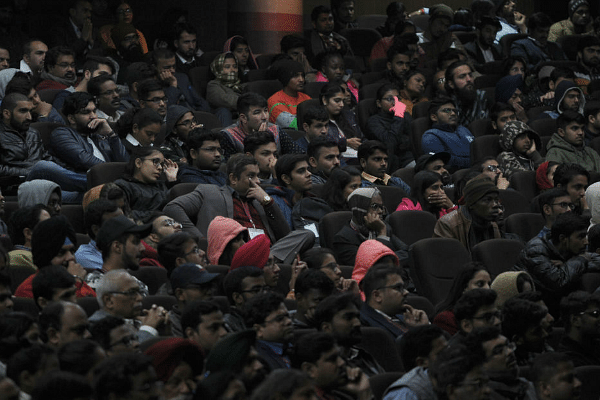 Students and guests during the 106th Indian Science Congress at Lovely Professional University on 3 January 2019 in Jalandhar, India. (Ravi Kumar/Hindustan Times via GettyImages)

It is January again, and the Indian Science Congress (ISC) has once more completed its deliberations in its 106th session at Lovely University, Jalandhar. The prime minister of the day has once again exhorted all of us mortals to do our science well and make the country progress.

In recent years, we have also had a fringe element from the right wing have their say about how we knew much of what modern science talks about now, millennia ago. Fringe players from the left, and they include central ministers, have had their say in the past in the ISC and have told us, like all good leftists, that how you do your science is more important than what science you do, whom you teach is more important than what you teach.

Now it is the turn of the fringe from the right to tell us that we knew ages ago everything there is to be known about plastic surgery, rockets, computers, test-tube babies, and so on. You can take your pick.

Science, and in particular the honestly pursued if only modest science, as is practised in India today is getting a bad name through the ISC. This is a wake-up call for all reasonable Indian scientists and, dare I say, all members of the knowledgeable public to try and put science back on a steadier track.

The ISC has had a glorious beginning and a hoary tradition since its inception a century ago. It has been associated with names like Sir Ashutosh Mukherjee, Lord Rutherford, Daulat Singh Kothari, Ram Nath Chopra, and Suri Bhagavantam. The overall standard of science in India compared favourably with what was going on overseas in those days, but the number of practitioners was small.

The ISC also got a big break when our first prime minister, Jawaharlal Nehru, started the tradition of addressing this annual gathering. Nehru genuinely believed in science as an uplifter and held the science and technology portfolio throughout his tenure, a tradition that was continued by all prime ministers till 1996. If nothing else, this symbolic gesture at least made Indian scientists feel good.

In reality, however, things were rapidly going downhill for Indian science as far back as the 1960s and we never really recovered. The world was moving too fast. We were too sluggish. The reasons for our decline in science were many and this is not the appropriate forum to detail these unfortunate events. However, it will suffice to say that international science began to get linked to big funding around that time. Good science was big science and our economic situation in the 1960s and 1970s was dire.

Science never really took off in India, therefore, and today, we are not serious players in the world of science. We need to be clear about this and also understand that we’re getting less and less competitive. But, and this is important, it was never a hopeless situation for India – China was far worse in science in the 1960s and 1970s. Today, they are second only to the United States of America (USA).

As far as India was concerned, it was a question of bad management, bad decisions, egotistical science leaders, a faulty education policy, failure of our state universities, our reservation policies, corruption, nepotism, and cronyism. It is no wonder, then, that our standing in the world of international science is so poor today and Indian scientists, as a group, are not taken very seriously.

The ISC gradually degenerated into a sightseeing mela (festival) for attendees and families, with low-class food being thrown around. The quality of a scientific meeting in any country roughly parallels the quality of science done in that country. Indian science is of poor quality. Therefore, the ISC is also of poor quality.

I have attended two of these jamborees over the past 40 years, in both cases only because it was being organised by people for whom I had some respect and consideration. These occasions were tolerable, although the numbers of riff-raff in attendance was already uncomfortably high (these occasions were 20 years ago and more). I did not meet too many colleagues and peers in these ISCs.

On a third occasion, I was invited to attend to pick up a medal, but since the person after whom the medal was named was someone for whom I had little respect, I declined the invitation.

It has become something of a tradition for ISC organisers in recent times to go hunting for the scalps of Nobel laureates and physically carry their trophies into the event to display to one and all. I suspect most of these innocents have no idea about what the ISC is and that they attend assuming the best bonafides of the organisers. What they see at this end is something different.

Two such Nobel laureates who have been conned into attending the ISC have told me personally that they were appalled by what they saw. They were also highly embarrassed by the elaborate and expensive gifts they received. These gifts are a little-known facet of the ISC. The laureates wanted to know why the handful of Indian scientists they knew professionally were nowhere to be seen in the ISC. I tried to tell them in the best way I could that the ISC was not representative of some of the more acceptable things going on in Indian science.

The Jalandhar ISC has set off the usual rash of articles and comments about what is wrong with Indian science. The left and the right are both spouting expected lines. It is said that the Children’s Science Congress was really nice. It is said that all that is old is not necessarily obscurantist and we need to educate people on what was done right in Indian science in the distant past.

To all these apologists, I will only say that while both science popularisation and ancient science awareness are important, we don’t need an ISC, with the prime minister himself in attendance, to validate such efforts. Such worthwhile aims can well be pursued in smaller, more personalised gatherings. We need to introspect. Do we need this ISC anymore if all it is bringing us is bad publicity?

Over the years, the appearance of the prime minister is about the only point that even makes the ISC newsworthy. This appearance calls for further comment and discussion. Over the years, the prime minister’s speech is a safe and sure exhortation about the importance of science, its role in nation building, and its general importance. It is, as the Americans would say, like mother, flag, and apple pie – you can’t object to any of it.

In the 106th ISC, the prime minister did go outside his region of comfort and asked for a reform of the state university system. I personally believe that this is the single biggest item that needs urgent attention, not just in science but across the education sector in general. It will be a game-changer because, and as mentioned by the prime minister, 95 per cent of our young people study in the state universities, and today these institutions are in a deplorable condition. (I have written about this in Swarajya).

The prime minister cannot be expected to personally know about the nuances of science and he rightly expects his advisers, the secretaries of science departments, the principal scientific adviser, science and technology ministers at the Centre and states, and members of his high-level advisory committees to advise him not merely on executing government policies on science but also about what policy should or should not be adopted.

While it is the responsibility only of the political class to enunciate policy, they cannot do their job if all that the bureaucrats do is to act as an echo chamber for the politicians. This is what I fear is happening today in India.

It is important for science bureaucrats to tell the prime minister that there are different kinds of science and that it is important to specify the kind of science one is speaking about. There is science as a scholarly activity, industry-oriented science, science in society, science for the high-school student, and science for strategic purposes. The aims and goals of these varied kinds of science are indeed distinct, as are the methods employed to achieve success in any of them. Developing rocket technology is not the same as publishing high-impact scientific papers, which, in turn, is different from discovering a new drug or solving the drinking water problem in our villages and towns.

The prime minister’s speech in Jalandhar was a strange mix of these different kinds of science, all of which are no doubt of inestimable value to the country, but the overall effect of the speech, which must have been the handiwork of the prime minister’s science bureaucrats, is that of an ambivalent attitude towards science on the part of the government.

Since the scientific value of the ISC is now close to nil, we could at least try and morph it into a purely government function, where important policies are announced, detailed, deliberated, and discussed. The ISC in its present from has outlived its utility and should be scrapped. It is a travesty of its former avatars. Know when to cry halt. At the very least, the prime minister should stop attending it if the ISC does not change in its format drastically.

There is also no need for us to see Nobel laureates coming here to escape their harsh winters. And there is no need to see ministers, science bureaucrats, and local worthies clad in velvet gowns strutting across the stage in a parody of some medieval pagan rite.