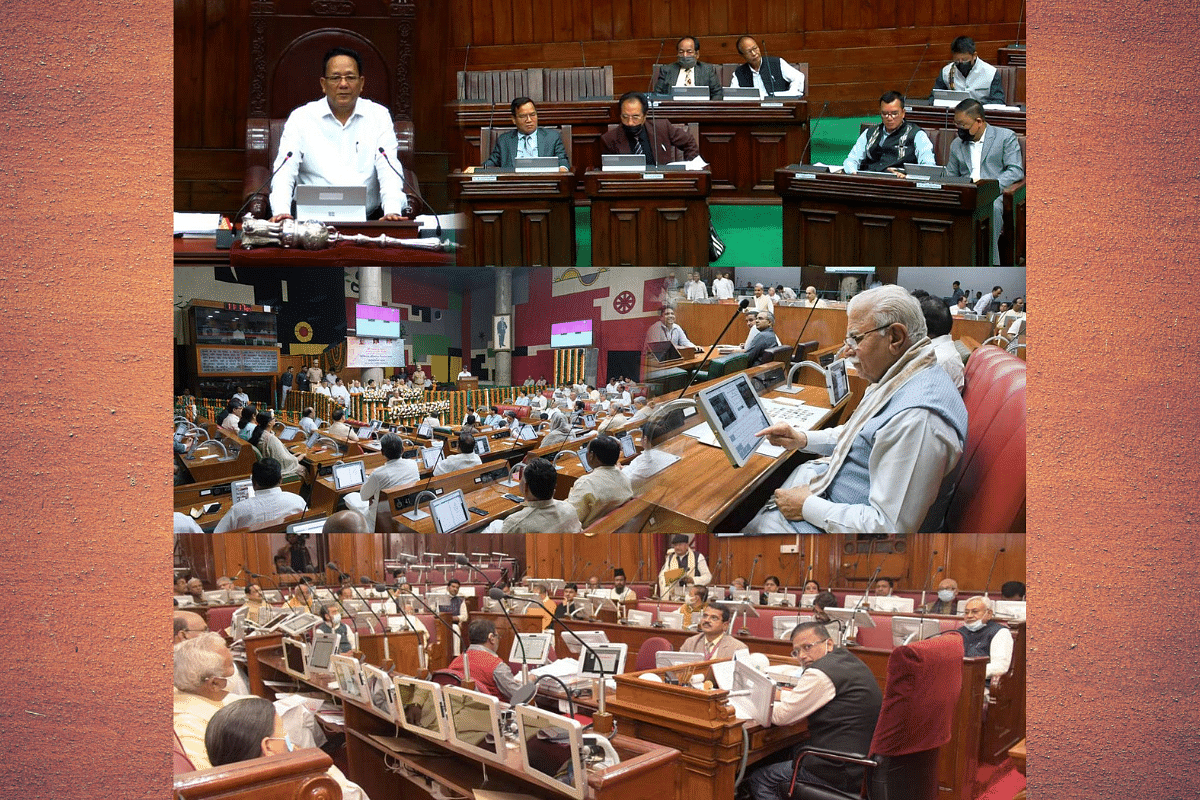 One of the key initiatives of the Digital India programme — which has been pursued with quiet, understated efficiency — is the mission it undertook, starting in 2018, to make the working of legislatures in all 31 states or Union territories completely paperless.

Sponsored by the Ministry of Parliamentary Affairs, which has underwritten over Rs 738 crore of the cost, and will fund the project in every state for the first three years, the programme is built around the National e-Vidhan Application or NeVA.

This is a software workflow system that helps the speaker and members carry out the business of the House entirely without paper.

Before the formal launch of the NeVA programme, a small Rs 8 crore pilot was run in Himachal Pradesh as early as 2014. This technically makes the Shimla Legislative Assembly the first in India to have gone paperless.

The application hosts a secure page for each member of the House for submitting questions and other notices.

The larger mission is to bring all the legislatures in the country together, on to a single digital platform, thus creating a massive and valuable database of decision-making, which will ultimately result in better governance.

As a first step, all state editions of NeVA are hosted on the National Informatics Centre’s Meghraj data cloud.

The huge expected savings of paper is an added bonus and an obvious candidate to achieve the United Nations Development Programme’s Sustainable Development Goals.

The Parliamentary Affairs Ministry funds the paperless legislature project in a 60:40 ratio, with each state pitching in with the smaller element.

For North Eastern and hill states, the Union Ministry pays 90 per cent share. For Union territories, it pays all 100 per cent.

States are expected to bear the recurring expenses of running e-Vidhan after the initial three years.

From the beginning, states have been taken on board in evolving the solution — and through workshops and training camps over the last three years — for legislators and the support staff.

While no one has gone on record to document it, the periodic announcements on the NeVA website leads one to fairly conclude that some states have embraced the idea of going paperless in their legislative assemblies or councils, while others have been unwilling to even make the initial investment in funds and have not exactly enthused their sceptical legislators.

Smaller States To The Fore

Interestingly, the smaller states, and some who are generally written off as basket cases, development-wise, have been the most proactive in ensuring that its lawmakers go progressively paperless.

Bihar was the first to install the necessary hardware in November 2021.  Odisha’s Finance Minister presented the 2021-22 budget using an iPad, and members could access the relevant papers by downloading the NeVA app, though the infrastructure in the assembly was not fully implemented then.

In Mizoram, on 6 September, speaker Lalrinliana Sailo launched the NeVA app in the assembly.

Meghalaya implemented the same solution on 9 September. Speaker Metbah Lyngdoh said: “It is high time to make this Assembly digital!”

He added that all hard copies of documents will henceforth be e-books, and proceedings of the house will be published online for access by any citizen.

Opportunity For Indian IT Companies

Both Mizoram and Nagaland entrusted the implementation of the NeVa solution to the same agency.

SBL Knowledge Services is an information technology (IT) services company with multiple centres in Kerala, Tamil Nadu, and Karnataka, as well as in the United Kingdom, United States (US), and Middle East.

The founder-chief executive, Gopakumar Pillai, said last week: “The excellent initiative by the Assembly has sparked an entry of the state and its people into the digital era. A proven template has been established for others to follow.’’

While the NeVA template has been prescribed by the Parliamentary Affairs Ministry, it is left to each state to select its own delivery partner. This, in turn, has helped to create a panel of qualified providers offering healthy competition and choice.

While the infrastructure and hardware challenge may be relatively minor in states with Houses made up of only 50 to 60 members, they can become formidable in a state like Uttar Pradesh, where the assembly needs to cater to 403 members. But they are on top of that particular problem and have already installed 416 tablets, with some units to spare.

Last month, the Haryana Vidhan Sabha affixed tablet PCs to every member’s desk. And legislators had the pleasant experience of clicking on their devices to mark their attendance, track development work in their own constituencies, and funnel information to their constituents.

To adopt the NeVA system, each state needs to enter into a memorandum of understanding with the Centre and submit a detailed project report with their local partner.

Some 20 states are known to have taken this step, and their legislators and support staff have already undergone orientation courses.

There is a palpable change in the way information is shared with citizens.

The NeVa website provides a dropdown webpage for every state or Union territory. This (in advance of some states who are yet to implement the e-Vidhan tool) is already an extremely useful dashboard for citizens on the legislative calendar, the bills being tabled, the committees meeting, and a directory of members with phone numbers and email IDs.

A few years ago, one would have had to run from pillar to post to get such information. The webpage is available in two versions: English and the language of the state.

This initiative was slow to take off since it was first mooted three years ago. But push has finally come to shove in the programme of making legislative processes paper-free.

Getting on board the paperless train should be a no-brainer for any state, and having a readymade, proven solution makes the transition virtually painless.

There is a story, probably apocryphal, that if some states are still not fully committed, it is because their legislators fear that a totally paperless assembly or council will leave their chambers free of the stuff that goes to make ‘missiles’ and may render technically infeasible such acts of high drama like tearing up and strewing documents not to their liking.

They would probably not risk throwing their tablets — even if they were not all tethered as some states have opted.

One way or another, digitally driven, paper-free deliberations of lawmakers in Indian states seems like a great idea whose time has come.

While many parliaments abroad have harnessed artificial intelligence to provide their lawmakers with better decision-making tools, hardly any one has addressed the sheer sweep and scope of India's paperless solution for  some 44 separate locations (adding legislative assemblies and councils).

Some, like the British Parliament and the US Congress, seem to make a virtue of being as old-fashioned and unchanging as possible. A recent article in Analytics magazine has some interesting inputs on what other countries are doing in this area.

But how long will it take for some among us to ask: If 31 Indian states can do it, why not the Lok Sabha and Rajya Sabha?

Additional resource: A useful brochure on NeVA, brought out by the Parliamentary Affairs Ministry, can be downloaded here.