A Primer On Green Hydrogen For The Rest Of Us: Sifting Hope From The Hype 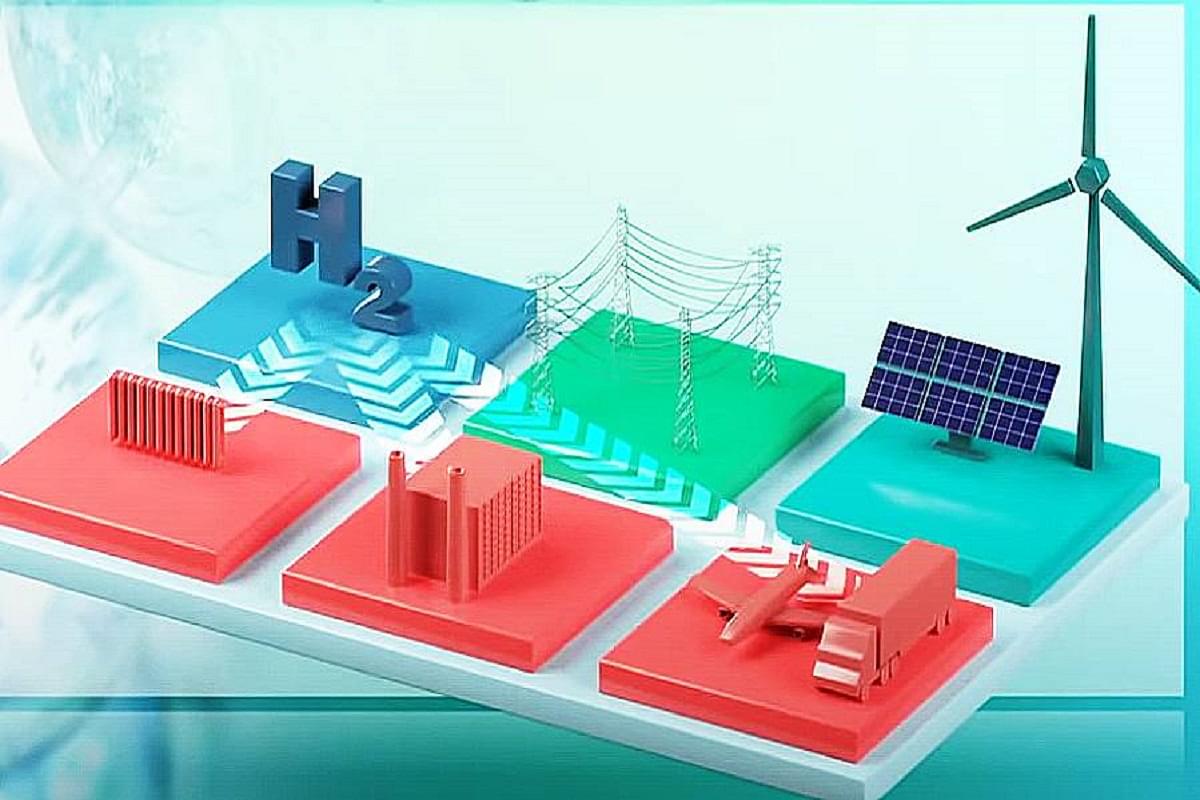 Six months ago, India’s National Hydrogen Mission took off, with its stated aim to meet the nation’s climate targets even while transforming into a global hub for the manufacture and export of green hydrogen and the technology of fuels cells that would convert the hydrogen into electricity.

Since then, public and private commitments to help this process have come thick and fast.

Hardly a week passes without practical demos or announcements of green hydrogen applications in transportation or heavy industry sectors like fertiliser, steel and oil.

While state enterprises like NTPC, GAIL and Indian Oil are willy-nilly committed to going green in their production processes, the entry of mega private players has been an interesting development – and pragmatism has led them to shorten the development cycle by strategic alliances with global leaders in the business of clean-n-green hydrogen:

The Adani Group has allied with France-headquartered Total Energies to form Adani New Industries Limited (ANIL) for the production and commercialisation of green hydrogen in India.

Reliance Industries has turned to the US-based Chart Industries to create an India H2 Alliance (IH2A) with other local partners, down the hydrogen supply chain.

Last year, it also tapped Denmark’s Stiesdal A/S for the critical electrolysis technology that splits the Hydrogen and Oxygen elements of water which as every school child knows, is H2O — two parts of hydrogen to one part of oxygen.

Indeed, this technology — electrolysis — is the only viable route to producing so-called “green” Hydrogen and the process, while well understood, is yet very thin on the ground worldwide and accounts for 1 just per cent of all the hydrogen that is produced for industrial use.

This means the other 99 per cent is produced by relatively ‘dirty’ methods — ie, the production process creates harmful waste like carbon dioxide (CO2).

Natural gas or methane is the most common source for producing hydrogen and this is called grey hydrogen since it emits carbon dioxide into the air.

Slightly less harmful to the environment is blue hydrogen where the CO2 generated during manufacture is ‘captured’ and stored permanently underground.

“The fossil fuel industry has helped generate enormous interest around hydrogen, making it difficult for policymakers to tell how much they can rely on hydrogen to meet climate goals. To avoid this trap, policymakers must scrutinize claims about hydrogen and think critically about where it can be a meaningful part of real climate solutions.”

It has brought out a useful publication “Reclaiming Hydrogen for a Renewable Future: Distinguishing oil and gas industry spin from zero emission solutions”.

The 40-page PDF is useful to separate wheat from chaff, genuine green Hydrogen made from 100 percent renewable electricity to less clean methods based on fossil fuels.

So, when we talk of stiff national targets for hydrogen, a dash of realism (and honesty) is advisable:

Because let’s face it: India is the world’s third-largest power consumer and by implication the third-largest emitter of greenhouse gases.

When Prime Minister Narendra Modi attended the UN Climate Change Conference or COP26 in Glasgow in November 2021, he committed the nation to getting 50 per cent of its energy from renewable resources by 2030.

A NITI Aayog white paper in June 2022 entitled “Harnessing Green Hydrogen: Opportunities for deep decarbonization in India”, suggests that if the right steps are taken, India can generate the world’s largest electrolysis (green hydrogen generation) capacity of over 60 Giga Watts or 5 million tonnes by 2030 for domestic consumption.

This will help India meet its 500 GW renewable energy target by that year. The National Hydrogen Mission, estimates the demand for green hydrogen in India will grow five fold, to 28 million tonnes a year by 2050, to meet 6 per cent of her energy needs.

The shift from coal-based power generation is a necessary, but painful process — and in the short term, heavy industry will need to depend on grey and blue hydrogen to fuel its plants unless they are to come to a grinding halt.

But push has come to shove: Reliance which is among the world’s largest producers of grey hydrogen has seen the writing on the wall and has set in motion plans to progressively switch to green hydrogen from its own electrolytic production systems starting 2025.

What makes hydrogen green? The electrolytic process of breaking down H2O is what mathematicians would call a necessary but not sufficient condition.

The electricity that is used to drive large electrolysis plants must come from ‘green’ and renewable sources — like solar or wind farms. Just think of this: What would be the point of running a steel mill — or a train or a ship — on green hydrogen as a power source and claiming brownie points, if the electricity used to manufacture the hydrogen comes from a coal-fired thermal generating station?

The hype around hydrogen often glosses over such paradoxes — and nations are grappling with the need to find sufficient renewable energy sources to drive the true-green hydrogen making plants.

Germany, for example, is way ahead of other European nations on the road to a hydrogen-fuelled future, but while some of their biggest research labs run on hydrogen, they tend to come to a halt on days when the weather is cloudy — and the captive solar farm does not deliver electricity to the captive electrolysis plant.

India is more fortunate than most nations who are in an unofficial hydrogen race: the subcontinent has abundant sun and wind.

The Union Road Transport and Highways Ministry has seized the opportunity presented by the National Hydrogen Mission, without slackening the pace of progress in electric vehicles.

In a canny piece of ‘parallel processing’, it has simultaneously encouraged the development of passenger cars, buses, goods road carriers fuelled by green hydrogen, even as sister ministries of Shipping and Railways are helping efforts to run cargo ships and trains on hydrogen.

— Union Road Transport Minister Nitin Gadkari recently tried out India’s first Fuel Cell Electric Vehicle (FCEV) running on green hydrogen — the Toyota Mirai — and declared that he would personally use it to commute to Parliament house. The car is a pilot project of Toyota-Kirloskar Motors and the International Centre for Automotive Technology (ICAT).

— India’s first hydrogen fuel cell bus was launched last month by the Union Minister for Science and Technology, Dr Jitendra Singh — a joint development of KPIT Ltd and the Pune-based National Chemical Laboratory (NCL) of the Council of Scientific and Industrial Research (CSIR).

— In April, Union Minister for Ports, Shipping and Waterways, Sarbananda Sonowal, announced that a hydrogen-fuelled ocean-going vessel would be built in India with the Cochin Shipyard as the nodal agency.

— The Railway Ministry has awarded a contract to Hyderabad-based Medha Servo Drives for converting and retrofitting diesel engines to hydrogen-fuel engines. The pilot would be conducted on a Diesel Electric Multiple Unit (DEMU) on the 83-km Soniput-Jind section in Haryana; while the narrow-gauge heritage trains on the Shimla-Kalka route would be next to be ‘hydrogenised’.

— By a happy coincidence, the world’s first hydrogen-based trains were inaugurated in August, serving four towns in the Lower Saxony region of Germany — and manufactured by Alstom, the France-based advanced train set maker, who has a substantial presence in India (in Savli, Gujarat and Sri City, Andhra Pradesh) and already supplied most metro systems and Regional Rapid Transit lines as well as a driverless train for Mumbai Metro. The 14 German train sets have a range of 999 kms and attain a speed of140 kmph.

Fuel Cell At The Core

Be it train or car or bus, the system is similar: A fuel cell on board combines oxygen from the air with hydrogen which is carried on board in a tank to produce electricity which drives the motor.

The only ‘waste’ is harmless water vapour or steam. Smaller ships like yachts, work in an identical fashion — but there is hope that larger ocean-going vessels like cargo ships or tankers, can carry their own electrolysis plants to produce all the hydrogen they require.

That is a possibility with breathtaking possibilities for savings in conventional fossil fuels.

Which of the many transportation options that India is exploring will emerge as a viable opportunity for green hydrogen?

Experts feel trains could be first off the starting block, followed by passenger and goods carriers, since they could be started on fixed routes which are shorter than the endurance of the hydrogen gas tanks.

While companies like Toyota, Honda, Mercedes and Hyundai currently offer green hydrogen cars and makers like BMW, Land Rover and Vauxhall have expressed interest, consumers have shown scant interest, primarily because they have just had to consider switching to electric vehicles and another technology change is too soon to consider.

Like the early electric cars, hydrogen fuel cell cars at around Rs 30-40 lakh are way more expensive than petrol/diesel vehicles or even electric cars.

Moreover, the virtual non-existence of a reasonable network of hydrogen refueling stations in any country today, has made this a non-starter.

To pack in more hydrogen into fuel tanks to extend the range to 500 km or more, makers compress the gas and deliver it at very high pressure and low temperature. All this adds to the infrastructure cost.

The industry wisdom is to ignore the passenger car segment and concentrate on commercial vehicles where fleet owners could arguably run their own hydrogen production units, once they have scale.

But no one can afford to ignore hydrogen as an option when planning the energy roadmap of the future. Will it be affordable?

No one knows for sure. Will it be a viable option to fossil fuel-based alternatives? Looks like it. Is it going to happen anyway? You bet. The costs of opting out are just too high.

And the Indian government is perhaps being shrewd in looking upon the current concerns of global warming, not as a crisis, but as a challenge and an opportunity to wrest leadership in the manufacture and supply of one of the key elements of recovery — green hydrogen as a clean and non-polluting energy option of tomorrow.