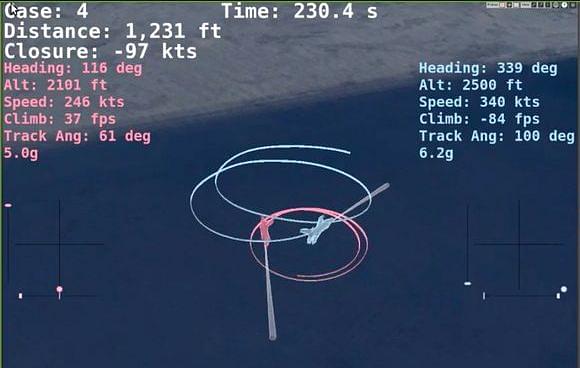 The use of artificial intelligence (AI) in diverse domains of military activity, from intelligence to training and logistics, is being explored by various defence forces and manufacturers as the battlefield becomes increasingly technology-driven.

Now, it seems, even the old school dogfights — aerial battle between fighter aircraft — are set to be revolutionised by AI algorithms.

On 20 August, in an event organised by the US’ Defense Advanced Research Project Agency (DARPA) to understand how AI and machine learning can be employed in air-to-air combat, an AI algorithm defeated a human fighter pilot operating a simulated F-16 Viper fighter jet in a virtual dogfight five to zero.

This event was the final dogfight of the US military’s AlphaDogfight challenge, which was organised to “demonstrate the feasibility of developing intelligent autonomous agents capable of defeating adversary aircraft in a dogfight”.

A fighter wins a dogfight when it manages to place itself behind the enemy and remain in that position long enough to get a kill shot.

Before taking on the real flesh-and-blood F-16 pilot in the final stage, the AI algorithm, developed by a small defence contractor named Heron Systems, had defeated several other teams participating in the challenge in AI vs AI dogfights. One of the teams it defeated was from Lockheed Martin, the world’s largest defence contractor, which settled for the second runner up position.

“All of the simulated fighter battles were restricted to allow use of the nose cannon only, and after the AI vs. AI matches, an anonymous human pilot entered the competition, wearing a VR helmet,” a report on Engadget said.

The human F-16 pilot defeated by Heron System’s AI algorithm is a weapons school instructor pilot, The Drive said in a report on the event.

The event was part of DARPA’s effort, called Air Combat Evolution, under which it is seeking to automate a lot of tasks a pilot performs during flight.

All participating AI algorithms relied on deep reinforcement learning, in which artificial intelligence algorithms develop a kind of understanding to perform their task with efficiency by indulging in it over and over again.

In other words, AI-based algorithms make errors and learn from them, and in the process associate cost and benefits with each manoeuvre and update these based on every new experience simulation after simulation.

“What you were basically watching was the AI agents learning to fly the plane,” Col Dan Javorsek, a former F-16 aviator and test pilot who managed this event for DARPA, was quoted by Popular Science as saying.

“A lot of them killed themselves on accident—they would fly into the ground, or they would just forget about the bad guy altogether, and just drive off in some direction,” he added.

Fore example, pulling hard turns during flight produces dramatic G forces which, among other things, can damage the fighter jet. The AIs had to develop an “understanding” to deal with such tricky situations.

According to Defence One, senior machine learning engineer at Heron Systems, Ben Bell, has revealed that their AI algorithm or agent had been through in at least 4 billion simulations and had acquired at least “12 years of experience”.

The AIs, however, were not allowed to learn from their experiences during the actual trials. This, Bell said, was “a little bit unfair”. The human pilot, however, shifted his tactics significantly by the fifth round, which helped him to last longer.

This was not the first time an AI agent defeated a human fighter pilot. In a simulated combat in 2016, an AI agent named Alpha had managed to beat an experienced human combat flight instructor.