Lesson From Wannacry: We Should Not Become Slaves To Tech, Or Tech Experts 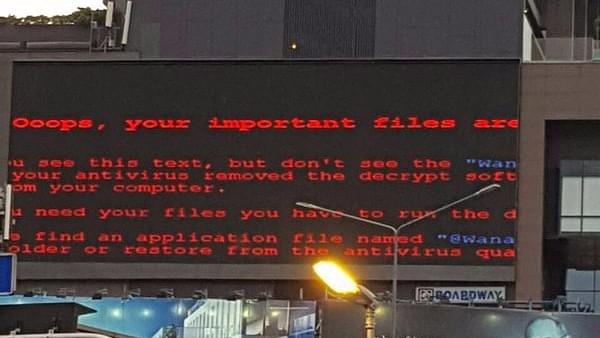 Board hacked in Bangkok (Twitter.com/gcluley)

Domination of technology over our lives is so great, that we need to worry about tech companies becoming the new ‘States’

The Wannacry malware, which has infected more than 300,000 computer systems worldwide, blocking access to connected systems and files, is a major wake-up call not only for India, but the world.

India – touch wood – seems relatively less impacted, though our vulnerability is effectively higher since we still use unsupported Microsoft operating systems like Windows XP or Windows Server 2003 – which seems to be the inlet valves for Wannycry. While Microsoft is sending patches to those still using these operating systems, one can’t be sure the malware won’t have variations that can block more systems.

It is unlikely that the malware’s developers did not think of planning a second wave of attacks, if the first one does not work, or deliver enough ransom. If they are good enough to cripple the British Health Service, the German rail network, a Spanish telecom player, FedEx, and 29,000 institutions in China, including universities, railway stations, hospitals and gas stations, they are capable of doing more damage.

The malware, once it enters your system, scans other linked systems and spreads. It includes an encryption packet that downloads and locks up linked systems and demands a ransom of $300-600, payable in crypto-currency Bitcoin, in order to provide a key to unlock your devices.

In India, many ATMs are likely to be vulnerable, since they use old, legacy hardware and operating systems, and the Reserve Bank has asked banks to speedily update their ATMs, either from a centralised server, or, if needed, by physically despatching engineers to ATMs that can’t be fixed remotely. If physical reach is required, this will be the second time in the last seven months when ATMs will go kaput, as engineers try to upload the Microsoft patches and other malware protection systems. We will revisit the ATM crisis of demonetisation, though possibly not on that scale.

The message for us and the world is simple: don’t make technology the entire part of your life or work systems. If you do not have simple back-ups and alternatives, ways of managing without technology or with simple technology, we will be over-reliant on thousands of “experts” who will charge a bomb to help us, or else…

It is not good for any country, any society, to be over-dependent on a handful of experts to rescue the world from technology chaos.

It is worth recalling that during the demonetisation cash crisis, it was India’s thousands of bank branches – especially those run by public sector banks – that prevented cash from drying up altogether.

Libertarians believe in giving a minimal role for the state, so that individuals and societies can have greater freedom to manage their lives as they think fit. But we seldom learn to question technology companies who offer us goodies to give up our independence (and our personal data). Over time, we tend to lose all our ability to function without them. Consider how many people today can do without email, mobile phones, or credit cards, or – the biggest dependency of them all - the internet. And we have named just a few dependencies.

Technology is great to have, but our over-dependence on it can cost us, creating a small group of experts who will be paid over the top, leaving the rest of us to be satisfied with playthings like Google maps and Facebook, and relatively small incomes. The domination of technology over our lives is so great, and looks like becoming greater, that we need to worry about tech companies becoming the new ‘States’ – with control over our lives.

It is time to pull back some sanity. Overdependence on anything, whether technology, or globalisation, or exports, is dangerous. And this is not about being a Luddite. We must use technology to harness its benefits, but we must also have backups when technology works against us and our freedoms.

The key to independence and individual freedom is in achieving a balance between the technology that is useful to us, and in limiting its use to a level where we are not slaves to it.

Right now, the world is in a barrel riding the technology Niagara.

India has been saved from Wannycry simply because we are not yet so technology-dependent as the West.

We still need to go further with technology, but we must also build safeguards that allow us to function when tech breaks down, or hackers figure out how to cripple us.

The next steps in the digitisation of India must be slower, and surer, with deep thought going into safety and privacy issues. The purpose of tech is to empower all, and not just the handful who own it, or who can hack it.

Commonsense tells us that we should not put all eggs in one basket. Why then do many believe that the tech basket is an exception?