SpaceX’s Falcon Heavy – A Rocket That Might Just Take Humans To The Moon, Mars And Even Beyond 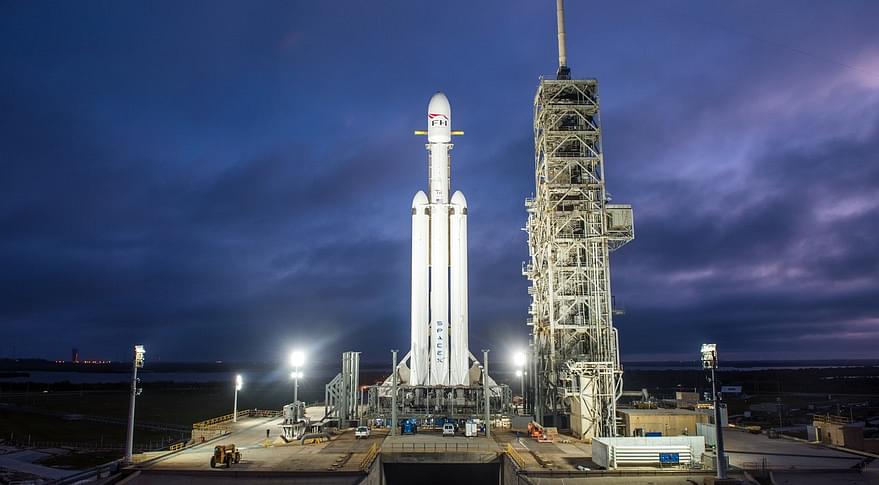 (Falcon Heavy at the launch pad, Photo by SpaceX)

The global space industry is eagerly looking forward to the inaugural launch of Falcon Heavy, a new heavy rocket designed by Elon Musk’s SpaceX, this week. The rocket with 27 engines and three cores will be among the heaviest ever launched across the world and will theoretically be able to carry around 60 tonnes of payload to low-earth orbit.

The rocket is impressive for two reasons. One, the payload capability is already twice that of what is today available across the world. Second, the rocket can deliver these payloads for much lower prices than others. SpaceX can do this because the company has mastered the ability to reuse rocket cores by getting them to land back on earth or on large barges on the ocean. Thus, the company saves on manufacturing costs for subsequent launches - other companies have to make new rockets. But there is a lot more to SpaceX’s cost savings than just reusable cores.

SpaceX is probably the first serious space company that has managed to develop impressive, viable rockets by innovatively deploying commercially available off the self-components. For example, it uses bathroom stall latches as hatch handles in its space capsule and saved a little over $1400 in the process. The company used safety belts used in race cars for astronauts instead of building custom safety belts as NASA would have done.

SpaceX didn’t simply assemble the rocket from components bought from the market – it got engineers to develop new cutting edge solutions for a fraction of the cost in many instances. It cut costs on radio devices by building them in house and saved $45,000 to $95,000 per device. The company rocket’s avionics computer systems cost $10,000 while others such as NASA use systems costing $10 million. There is an often repeated episode about how Elon Musk got an engineer of his to develop an electro-magnetic actuator for $5,000 while a commercial equivalent from the market would have costed $1,20,000.

All this engineering enables SpaceX to offer commercial rocket launches for cheap prices when compared to other options. For example, a Falcon-9 rocket launch costs begin at just $62 million whereas other rockets cost upwards of $109 million. Falcon Heavy too will be quite inexpensive – at $90 million per flight. Such inexpensive launches for payloads as large as 60 tonnes will allow the company to grab lucrative contracts for launching very heavy national security satellites for the US government, large telescopes, space station components and such.

A word about India’s Polar Satellite Launch Vehicle (PSLV) here. The PSLV while being a reliable workhorse at cheaper rates per launch than SpaceX suffers from payload limitations. The rocket can only launch 3,800 kilograms of payload to low earth orbit while SpaceX’s Falcon 9 can put thrice as much in the same orbit. SpaceX is already launching supplies to the International Space Station through it’s Falcon-9 + Dragon capsule combination for a neat profit.

But the interesting utility for Falcon Heavy would be in manned missions, mission to the moon and perhaps in getting heavy payloads to Mars. Quite fortuitously the rocket is arriving at just the right moment: the US is getting keen on manned missions to moon and exploratory missions to Mars. But NASA’s flagship rocket that is supposed to be its workhorse on these missions is nowhere in sight.

The NASA Space Launch System (SLS) with its designed payload capability of shooting 70 to 130 tonnes into low earth orbit is a much heavier workhorse than SpaceX’s Falcon Heavy. However the rocket will be prohibitively expensive at $500 million per launch and is many years from its first flight.

Many in the US establishment have pushed for sustained funding of the SLS, for political and economic reasons, arguing that America needs to retain an ability to launch very heavy payloads into space. There is also the view that even SpaceX with its notoriously low launch rates will be able to do launches with 70-130 tonnes payloads to low earth orbit at only $300 million (by Elon Musk’s own admission).

A US commission that studied options for manned space exploration suggested that rockets with smaller payloads (around 70 tonnes) can be used for long range missions as one of the launch options. The idea is to launch smaller components that can be assembled in space to form large vehicles or to refuel rockets and such.  This is exactly where a Falcon Heavy might be useful if NASA’s SLS doesn’t show up on time.

To be sure the Falcon Heavy can already carry a meaningful payload for deep space missions. The rocket can carry 16.8 tonnes to Mars transfer orbit, a helio-centric orbit that can eventually take a spacecraft towards Mars.

To begin with the first launch slated for 6 February will carry Elon Musk’s personal Tesla Roadster to a Mars transfer orbit. The car’s audio system would be playing Space Oddity by David Bowie. A copy of The Hitchhiker's Guide to the Galaxy would be in its glovebox along with a towel and a sign that would say "Don't Panic". If the launch does go well, which many think it won’t, this would be the most hilarious and stylish signal of humans returning to the moon, going to Mars and eventually the deep beyond.