What Does Joe Biden’s Executive Order Mean For Big Tech? 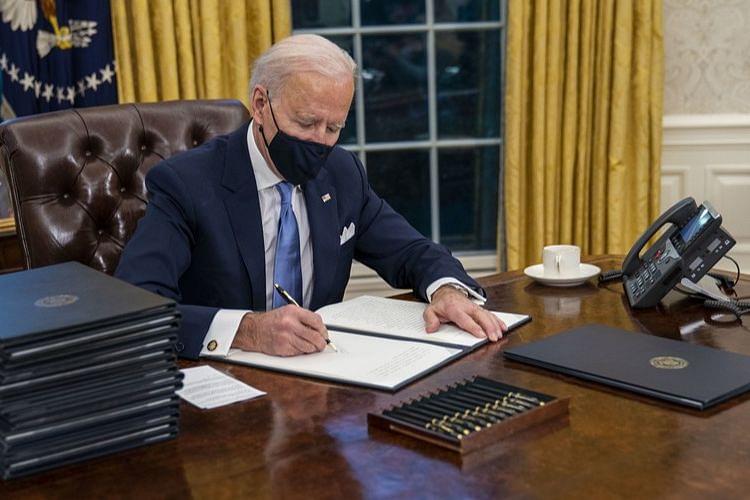 The President of the United States, Joe Biden, issued an executive order on 9 July focusing at increasing competition in the economy and limiting corporate control. The aim behind this order was to curtail corporate giants' anti-competitive practices, which the Biden administration has apparently identified as a factor that has resulted in higher prices and fewer options for consumers, as well as lower pay and less freedom to change jobs.

Among other industries, such as agriculture and pharmaceuticals, the directive will have a significant impact on Big Tech, which has already been the subject of intensive scrutiny in the US and around the world. The executive order will very certainly have the greatest impact on Amazon, Facebook and Google, with Apple, Microsoft and Twitter not far after. As per the reports, the White House urged federal agencies to adopt a variety of steps, including investigating the tech industry more carefully, cracking down on exorbitant fees imposed by maritime shippers and enabling hearing aids to be supplied over-the-counter.

While citing the agriculture, technology and pharmaceutical industries, Biden said on 9 July: "What we've seen over the past few decades is less competition and more concentration that holds our economy back". Before signing the directive, he also stated that "Today, I'm going to be signing shortly the executive order promoting competition to lower prices, to increase wages and to take another critical step toward an economy that works for everybody". Additionally, Biden said: "The heart of American capitalism is a simple idea: Open and fair competition. That means that if your companies want to win your business, they have to go out and they have to up their game. Let me be very clear: Capitalism without competition isn't capitalism. It's exploitation."

The US President explained that big players might modify and charge whatever they want without strong competition—and for many Americans, that means accepting a terrible deal for necessities. He added: "So, we know we've got a problem, a major problem. But we also have an incredible opportunity".

According to White House, the sweeping order, which contains 72 acts and recommendations involving more than a dozen federal agencies, is meant to reform the thinking around corporate concentration and antitrust laws. The wide-ranging goals include—urging the Federal Trade Commission (FTC) to challenge prior problematic mergers that the previous administration under Donald Trump, had allowed going unchallenged, trying to persuade the FTC to abolish occupational licencing regulations, claiming that they hinder economic mobility and encouraging FTC to prohibit or limit noncompete agreements.

The order also talks about motivating the Federal Communications Commission (FCC) to reinstate the "net neutrality" laws that were repealed under the previous presidency and urging that the FCC prohibit exclusivity agreements between landlords and broadband providers.

Furthermore, supporting state and tribal efforts to import cheaper medications from Canada to lower prescription drug prices, allowing the sale of hearing aids over the counter and establishing a "White House Competition Council" to guide federal responses to huge firms' growing economic clout—all these are included in the order. Brian Deese, who is the White House's chief economic advisor told CNBC: "The impulse for this executive order is really around where can we encourage greater competition across the board".

Biden's order aims to make the case that the largest companies in the sector are using their power to box out smaller competitors and exploit consumers' personal information through tech-related actions. According to Deese, the tightening grip of the tech behemoths has resulted in a decline in innovation. He also noted that these platforms have created significant problems, including issues "for users in terms of privacy and security" and "problems for small businesses in terms of entering markets". Deese said that the executive order isn't just about monopolies but also about consolidation and a lack of competition when there are only a few market players.

Citing some data, he said that wages are lower in highly concentrated marketplaces dominated by a small number of companies. According to a White House fact sheet, a May 2020 publication in the Journal of Human Resources analysed CareerBuilder.com data to determine that market consolidation predicts a double-digit percentage fall in salaries. However, the executive order comes only weeks after the House Judiciary Committee—a standing committee of the United States House of Representatives—approved the antitrust bills aimed at reviving competition in the internet sector. The legislation, which would make it more difficult for dominating corporations to merge and criminalise some prevalent business models for such firms, have been met with strong bipartisan opposition from individuals who believe they don't go far enough or may have unexpected consequences.

The FTC and a coalition of state attorneys general filed complaints in June alleging that Facebook had improperly preserved monopoly power, but a court dismissed them.

The executive order also directs the FTC to draft new laws governing Big Tech's data collection and user monitoring techniques, as well as to prohibit certain unfair competition practices on online platforms. Under this order, some relief to small, medium-sized enterprises can be provided that have complained about tech companies like Amazon, Apple, Facebook, and Google supposedly having a stranglehold on digital markets. However, Biden's executive order does not unilaterally impose its will on such tech behemoths. Instead, it rather calls on independent agencies to act.