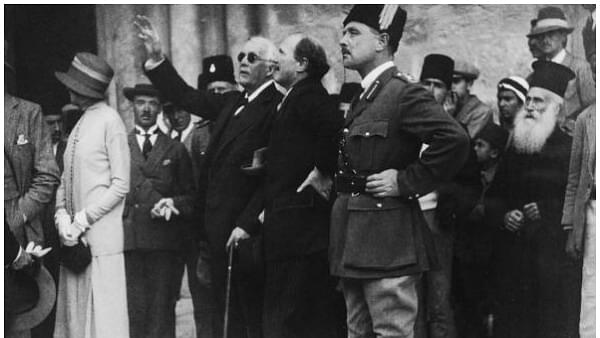 British politician Lord Arthur Balfour (1848 - 1930) points out a feature of the Church of the Holy Sepulchre to Governor Sir Ronald Storrs during a visit to Jerusalem, 9th April 1925. The city’s Arab residents were on strike as a protest against the Balfour Declaration supporting plans for a Jewish homeland in Palestine. (Topical Press Agency/Hulton Archive/Getty Images)

If one were to make a list of the most influential texts in the English language, the King James Bible would come right at the top. And the second position on the list may well go to the Balfour Declaration of 2 November 1917. The much-debated statement which conveyed the British government's support for the establishment of a Jewish national home in Palestine irreversibly transformed the Middle Eastern landscape. The 67-word sentence remains as contentious and controversial as it was a century earlier. Of late, some have even demanded punitive measures against the British for the Declaration and its consequences, especially its contribution to the Palestinian statelessness.

A vast majority of scholars tend to trace the Arab-Israeli conflict to Balfour and his pledge for a Jewish homeland in Palestine. Two things are essential to remember. One, the Declaration was a recognition of and response to the conditions of the Jews in the Diaspora and hence though the immediacy of the Arab-Israeli conflict can be traced to 1917, its roots are much deeper. More importantly, the Declaration recognised the historic link between the Jews in the Diaspora with Palestine as their home. Until then, the link was just a Jewish claim, but Balfour bestowed the legitimacy of the largest Empire of that time.

Though the Zionists made similar attempts to entice other great powers, including the Ottoman Empire, they were successful with Britain. And there was the invisible hand of God. Chaim Weizmann, the biochemists and a Zionist leader, developed a process of producing acetone through bacterial formation. This proved critical to the British war efforts and opened the doors to the British cabinet. Various drafts were exchanged between the two and the final version of the Declaration was approved by the War Cabinet in late October.

Thus, in the midst of the First World War, British Foreign Secretary, Arthur James Balfour wrote to Lionel Walter Rothschild, the leader of the Jewish community, and conveyed His Majesty’s support for the “establishment in Palestine of a national home for the Jewish people”. It carried a couple of riders; the maintenance of the status quo of the Arab rights in Palestine and Jewish rights in the Diaspora but their implications were radically different and uneven.

Conveying the Cabinet decision, Lord Balfour flagged the British government’s “sympathy with the Jewish Zionist aspiration.” This is an admission of the internal Jewish schism both within and beyond Britain. While gentile Zionists like Balfour himself and Winston Churchill pushed for the national homeland project, there were other Jewish leaders who were not enamoured by Zionism or the idea of special privileges for the Jews in Palestine. As later events proved, some of the leading critics of Israel, including those who support and endorse various boycott campaigns, are Jews. Hence, the Jewish-Zionist dichotomy that Balfour visualised in 1917 proved to be a foresight than semantic differences.

The operative part of the letter which contained the British pledge runs as follows:

“His Majesty’s Government view with favour the establishment in Palestine of a national home for the Jewish people, and will use their best endeavours to facilitate the achievement of this object, it being clearly understood that nothing shall be done which may prejudice the civil and religious rights of existing non-Jewish communities in Palestine, or the rights and political status enjoyed by Jews in any other country.”

As would be discussed, this sentence transformed the Middle East and one could flag five important features.

First and foremost, the timing of the Declaration highlighted the inherent nature of the Empire, the British in this case. Balfour wrote the letter on 2 November 1917, amidst the First World War. The commitment to Jewish homeland came more than a month before General Edmund Henry Allenby entered the City of Jerusalem on 11 December. Thus, when Britain pledged a Jewish homeland, Palestine was not part of Britain or a British territory, and it was not even an area under the British military occupation or presence. This was a classic case of robbing Peter to pay Paul. Other than being the largest and hence most powerful Empire at that time, London had no locus standi in Palestine.

Two, the Declaration talks of a Jewish homeland in and not of Palestine. This was a prelude to later day British policy toward this territory. In 1917, Palestine included the present day, Israel, Jordan and Palestinian territories of West Bank and the Gaza Strip. Shortly after the First World War, in April 1921 Britain carved the territories east of the Jordan River and established the emirate of Transjordan. This was also the first partition of Palestine and was carried out more than a year before the League of Nations gave Britain the mandate over Palestine in July 1922. The Revisionist Zionist viewed the formation of Transjordan as a British deceit of its commitments of Balfour, and until 1990 the Likud referred to ‘East Bank' in its platforms.

The carving out of the Emirate of Jordan was also a consolation for Sharif Hussein of Mecca who led the British-backed Arab revolt against the Ottoman Sultan in 1916. In return for this endeavour, through Hussein-McMahon correspondence of 1914-15—yes the same Henry McMahon who demarcated the India-China boundary—London had earlier promised an independent Arab Kingdom under Hussein.

Two, Balfour merely referred to British support for ‘a nation home’ for the Jews and not a state. Even though Theodore Herzl, the founder of modern political Zionism, titled his work as Der Judenstaat or The Jewish State, the idea of statehood was in its nascent stages at that time. The formal Zionist endorsement of a Jewish state had to wait until the Baltimore Conference of May 1942. As happened to the Pakistani nationalism in the Indian subcontinent, statehood was a transformative process and in the Zionist case was also the result of the demographic transition. Hence, Balfour settled for a more general and vague Jewish ‘homeland’ to the politically sensitive Jewish state.

Three, towards preserving the rights of the then inhabitants of Palestine, Balfour observed “civil and religious rights of existing non-Jewish communities in Palestine” would not be prejudiced. If one is unfamiliar with the demography of that time, this would be seen as a necessary step to ensure the protection of the minority population. This, however, was not the case. Balfour was offering protection to the majority non-Jewish Arab population who in 1917 made up close to 95 per cent of the population of Palestine. A conventional binary approach would have divided them as Arabs (the majority) and non-Arabs (the minority) but such a categorization would shift the focus away from the Jews. Hence, the Balfour Declaration settled for the Jewish and non-Jewish population of Palestine as the preferred terminology. Interestingly arguing along similar lines, under the leadership of Mohammed Ali Jinnah, the Muslim League divided the Indian population as Muslim and non-Muslims even though the latter far outnumbered the former.

Four, Balfour offered only limited protection to the ‘non-Jewish' population, namely ‘civil and religious rights' and that too only to the existing Arab population in Palestine. This was, in contrast, to the homeland promise given to the Jews who were yet to ‘exist' in Palestine in 1917. In short, ‘existing’ Arab population were given ‘civil and religious rights’ while national rights were bestowed upon the Jews who would be coming to Palestine in future.

Five, the idea of special privileges for Jews in Palestine unnerved the European Jewry whose political progress had been slow, painful and largely spurred by the French Revolution. Only when Christianity receded from the public domain could the Jews enter institutions of higher learning, emerging banking industry and eventually politics. Hence, the British government was aware of the possible ramifications, especially for the Jews living in Britain. Indeed a section of British Jewry was uncomfortable about them being granted special privileges in Palestine lest their loyalty to the crown would be put to the test.

Some senior Jewish figures who were serving in India at that time as well as their colleagues in the India Office were apprehensive that the Balfour Declaration would raise the bogey of double loyalty. For example, Edwin Montague, the Secretary of State for India, was a principal opponent of this move. The situation was equally true for Jews who were living outside the British rule or influence. Thus, Balfour declared that the British support for a Jewish homeland in Palestine would not undermine “the rights and political status enjoyed by Jews” not only in Britain but also “in any other country." A true imperial edict!

At the same time, it is essential to recognise that the Balfour Declaration would have been another piece of imperial correspondence buried with the mountain of letters and communications. This was not to be. The first shift happened in 1922 when it was included in the League of Nation mandate of Palestine given to Britain thereby transforming Balfour's pledge into an international obligation. This resulted in the mandate authorities facilitating a large scale Jewish immigration which transformed the Palestine's demography. From about less than five per cent in 1917, the Jewish community reached over 30 per cent of Palestine on the eve of the Second World War.

Furthermore, the interpretations of the 67-worded sentence have largely been a post-facto assessment necessitated by the facts-on-the-ground strategy of the Zionist leadership. By the mid-1930s Britain recognised its failure to bridge its conflicting commitments to Arabs and Jews and on the eve of the Second World War it came up with the MacDonald White Paper that formally renounced the British commitments to implement Balfour’s pledges. Hence, British were wedded to Balfour’s commitments only for a couple of decades.

Undoubtedly the Balfour Declaration sowed the seeds of the political trajectory of Jewish nationalism and led to the drawing of a roadmap for the realisation of Jewish statehood in their ancestral home. Not many had foreseen its consequences at that time. Indeed, even as late as in November 1947, the Arab states were so confident of overriding the partition plan proposed by the UN committee they even rejected Jawaharlal Nehru's compromise formula of a federal Palestine.

History's odyssey proved to be different, and Balfour became intractably and even irreversibly linked to the post-Second World War Middle East and its turmoil.