Bangladesh General Elections: Will Votes Of Hindus Matter Or Will They Be The Cornered Minority? 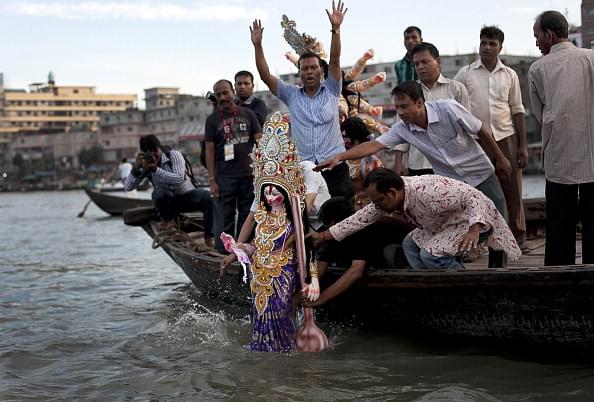 Hindu devotees in Bangladesh immerse a clay idol in the Buriganga River on the last day of Durga Puja in Dhaka. (Photo by Getty Images/Getty Images)

It would be no exaggeration to suggest that Bangladesh’s general elections this time around place the country’s Hindus in an unusually confounding and particularly awkward situation. The conventional wisdom of the Awami League being the obvious choice of minorities as their secular guardian may not be valid any longer, as the traditional dividing line between the country’s two main political camps becomes increasingly blurred.

The Awami League’s arch-rival, the Bangladesh Nationalist Party (BNP), has in the past certainly had a worse image than the incumbent government when it comes to corruption and terror. Currently, its party head Khaleda Zia is serving a long-term jail sentence for embezzlement, with her son Tareq Zia also being punished with solitary imprisonment on money laundering charges. Hasina and her merry men on the surface maintain a cleaner reputation.

The BNP’s longtime ally, the Jamaat-e-Islami is viewed by many as the greatest threat to the country’s secular status quo because of its blatant ‘Hindu-free’ Bangladesh agenda. It was the Jamaat which provided thousands of collaborators to aid in the Pakistani Military’s genocidal campaign against both Hindus and Bengali Nationalist Muslims during the 1971 Bangladesh Liberation War.

The Awami League, with its full throttle support to the prosecution of the Jamaat’s leaders for war crimes, its propagation of social reforms and women empowerment, and its dedication to secular ideals, was looked on as the Hindus’ best bet to ensure continued survival in the Muslim-majority country.

But the Bangladesh general elections scheduled to be held on 30 December 2018 have seen these static perceptions glaringly upturned.

For one, the Awami League is now in bed with one of the most notoriously fundamentalist Islamist groups in the country, Hefazat-e-Islam, which runs a large network of Madrassas across the country, and is also a prime recipient of Saudi funding aimed at propagating gulf-style Islamic revivalism in Bangladesh.

In 2013 the organisation caught international media attention for its ‘13 point-charter’ which carried ideas of Islamic fanaticism including the introduction of capital punishment for blasphemy against Islam and the re-insertion of the phrase ‘Complete faith and trust in the Almighty Allah" in the constitution.

Secondly, although Sheikh Hasina’s reign over the last ten years has seen the country’s economy see robust, consistent growth, her grip over power is increasingly seen as iron-fisted and authoritarian, contributing to the overall anti-incumbency sentiment against her government.

In an infamous episode of her party’s clampdown against the judiciary, the former chief justice of Bangladesh Surendra Kumar Sinha, a Hindu, was forced to resign from his position after refusing to budge on stopping an amendment which would have given the government extensive powers to remove Supreme Court justices.

The BNP is contesting the present elections as part of a coalition of parties called the ‘Jatiya Oikya Front’, led by Oxford-educated lawyer and head of the Gano Forum Dr Kamal Hossain.

The experienced jurist and veteran politician has a stellar reputation for previous instances of standing up for minorities’ human rights. Hossain was known for his unflinching secular stance criticising the BNP’s tyrannical treatment of minorities during its previous reign between 2001-2006.

So do Bangladesh’s Hindus essentially face a choice between the corrupt regime of an Islamist appeasing despot and a somewhat Islamist, yet democratic alliance led by a noted secular icon? If only answers were so simple and straightforward for the beleaguered community.

Although Hindus constitute somewhere between 8.96 per cent and 10.7 per cent of the country’s total population- enough to swing a close election either way, how they cast their ballots seems to have little influence over the trajectory of their future in these elections.

Both the Awami League and the BNP-led alliance have fielded a number of minority candidates for these polls, with the former fielding 18 non-Muslims, and the latter 7. Out of the 25 total minority candidates, 21 are Hindu. Most of these candidates are contesting from constituencies with a strong minority presence.

So there does exist the likely possibility of some Hindus making it to Bangladesh’s Parliament, the Jatiya Sangsad. One might imagine that the community’s votes would play a decisive factor in a sizeable number of constituencies, since they are geographically concentrated in about 30 or so constituencies, forming more than 25 per cent of the electorate there.

However, the Hindu vote doesn’t always punch at the weight that these numbers reflect since the community is often times prevented from voting either by outright intimidation or by manipulation of electoral rolls. For example, in 2006, reports emerged of Hindu areas being deliberately skipped by BNP staff assigned as electoral enumerators in Chittagong. Ironically, in this year’s general election campaign, it is a prominent Hindu politician from the BNP, Gayeshwar Chandra Roy, who has been injured in clashes with ruling party activists.

Fever pitch pre-poll campaigning this year has seen a repeat of the extremely brazen violence that always seems to mar elections in Bangladesh. Tit for tat attacks have led to dozens, if not hundreds, of injured on both sides, even as the army has deployed thousands of troops to ensure some semblance of peace prior to voting. The opposition is already accusing the government of heavy-handedness, with close to 600 BNP and other opposition activists being arrested in just the capital Dhaka itself.

The predicament of Bangladesh’s Hindus thus gets even worse. On the one hand, they can no longer be entirely sure of which political grouping will not opportunistically throw them under the bus on the whims of powerful vote-supplying Islamist factions. On the other, even if they were to somehow pick ‘the lesser of the two evils’, the power of their vote swing is reduced greatly by campaigns of coercion and contrivance.

Whichever side ends up winning and forming the next government in the country, the situation of Hindus could only see a further deterioration. The Awami league will no doubt support the creeping Islamisation of Bangladesh's culture, as they become ever more reliant on their well organised Islamist backers. The Jatiya Oikya Front is simply an alliance of convenience, with Hossain being a mere figurehead, or at worse, a tool being used by the BNP to more effectively dismantle Hasina’s power base.