Behind Nawaz Sharif’s Downfall, A Familiar Foe In Pakistan 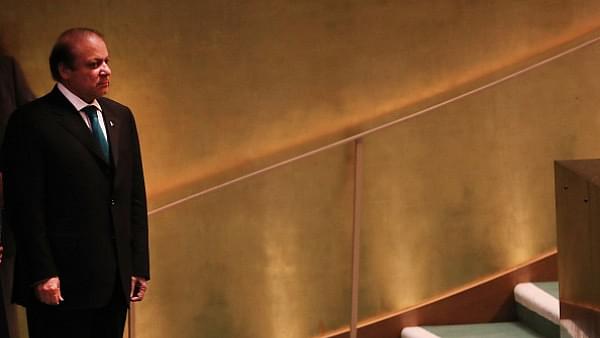 In the uniquely weird land to the west of India, another civilian leader has bitten the dust. Nawaz Sharif came close to becoming the first elected prime minister of Pakistan to complete a full five-year term. But it was not to be. On 28 July, the Supreme Court of Pakistan disqualified Sharif from holding any public office in the future.

Is Sharif corrupt? No one knows. Nor will anyone know. The six-member cherry-picked joint investigation committee (JIT) could hardly find any concrete evidence against him or his family despite sweating it out for two months. The Supreme Court has disqualified him on the assumption that he was not fully honest in disclosing his role in one of the companies run by his family in Dubai. Of the numerous ‘allegations’ that the JIT – comprising Military Intelligence (MI) and Inter-Services Intelligence (ISI) members – threw at Nawaz, few were convincing. The Supreme Court has, therefore, decided to constitute an accountability court to further probe his and his family members’ ‘corruption’.

None of this matters. Sharif had to go because he had attempted to wrest control of Pakistan’s foreign policy from the Army. He had provoked the generals by attempting to improve relations with India and Afghanistan. His government had tried to convince the corps commanders to change their policy of using proxies in the neighbouring states because this was isolating Pakistan in the West. In the eyes of the Army, this was blasphemous. Actions of his government in hobnobbing with neighbouring countries and trying to build an environment in Pakistan against extremists by ‘leaking’ selective information caused a chain reaction leading to yesterday’s judicial coup.

Sharif’s close confidantes were not ready to back him in his struggle against the generals. Chaudhry Nissar, the blue-eyed boy of the Army in Sharif’s party, held a press conference on 25 July, claiming he was in the know of serious external threats to the country. He also claimed that he had played “devil’s advocate” to Sharif. This could only mean that he had advised Sharif to acquiesce to the narrow worldview of the Army, where India was an enemy forever and Pakistani Army the only saviour of Pakistan. His advice to Sharif to make up with the army was most likely turned down, leading to the court’s decision.

The judges have historically been on the side of the generals more often than on the side of law. They have given legal acceptance to every military coup in Pakistan till date. The disqualification of Sharif on flimsy grounds is only the latest in an ongoing saga of cooperation with the generals and supporting populism even when it may not be strictly according to the law. In contrast, the former military dictator and army chief, Pervez Musharraf, is comfortably ensconced in his house in Dubai despite being declared as an absconder by the same courts.

Yousuf Raza Gilani, the prime minister of Pakistan from 2008 to 2012, was also disqualified and booted out by the Supreme Court. His crimes were similar, and the current drama appears to be a repeat with slight changes in the plot. Hussein Haqqani, the former Pakistani ambassador to the United States, had allegedly written a memo seeking support from Americans for the civil government because it felt threatened by a military coup in the wake of the killing of Osama bin Laden by American forces. While Haqqani and the government denied any wrongdoing, the Army was furious. Gilani was cashiered by the Supreme Court, which disqualified him for, above all, contempt of court. That was in 2012.

The civilian leaders in Pakistan are a harried lot. They are hard-pressed between a burgeoning illiterate population on one side and unrelenting institutions which have more power than they do, on the other. Corruption is a populist weapon, often used by their detractors to beat them with. Once a civilian leader is tainted with the ‘corrupt’ tag, he carries it with him for the rest of his life. Other institutions which may know better are still eager to use the stick as and when it suits them.

In such a difficult scenario, where leaders could pay for infractions with their jobs, or in case of Zulfikar Bhutto, with his life, only a harsh man would criticise a politician for cosying up to the Army. Sharif himself was brought into politics by the infamous military dictator Zia-ul-Haq. In the general elections in 1990, he was the beneficiary of the Army’s efforts to defeat Benazir Bhutto. Where Sharif was in 1990, Imran Khan is in 2017. It is Khan’s political and legal efforts, blessed by the Army, which have brought Sharif’s downfall.

The road forward is murky, though. Khan is undoubtedly the Army’s man now. But he is still an electoral lightweight. His party, Pakistan Tehreek-e-Insaf (PTI), has not done too well in electoral politics till date. The Army’s relationship with the other two larger parties, Pakistan People’s Party (PPP) and Nawaz’s party Pakistan Muslim League (PML), has frayed in the last decade. Central to this is the realisation by both PPP and PML that Pakistan is going downhill. Islamabad’s use of Islamic proxies to counter India is making it a pariah in the Western world. The deviation from the Army’s strict line of “India is the enemy” and “everything is fair to counter it” has caused a break between the generals and the civilian leaders.

After failing to dislodge the larger parties in his 20 years of politics, Khan is also desperate for success. He is willing to join hands with the Army to achieve this. He met the Army chief General Bajwa on 31 March before the decision of the Supreme Court on the Panama case scandal. Whether this alliance will be able to dislodge the PML or PPP in electoral politics remains to be seen. The infamous institutional malfunction in Pakistan has received yet another addition to its already long list, though.