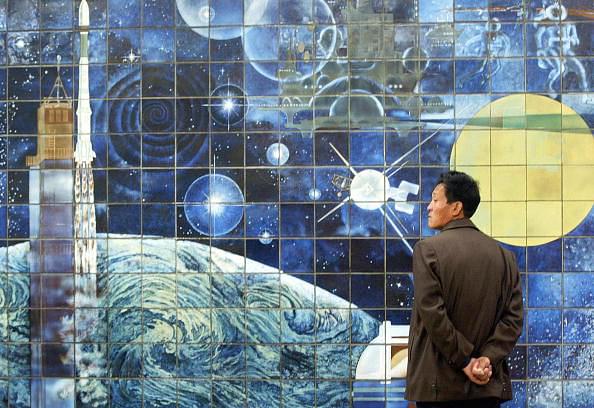 A man waits beside a space mural for a train at a Beijing subway station (FREDERIC J. BROWN/AFP/Getty Images)

China’s space capabilities are getting a boost at a time when its geopolitical stature in Asia is rapidly increasing. It is scaling up its presence in outer space with an increasing fleet of satellites, catering to a wide variety of applications needed for a major space-faring nation.

China’s venturing into outer space resonates with its discovery of the Eurasian hinterland and the Indo-Pacific coastline in its history. The orbital entry of China’s first satellite, the Dong Fang Hong in 1970, and the first Taikonaut, Yang Liwei in 2003, seem to echo the ground-breaking expeditions by imperial envoy Zhang Qian to Inner Asia, leading to the start of the Silk Road two millennia ago and the expeditions to the far seas by Zheng He five centuries ago. It also appears to be far from coincidence that all these voyages were initiated by the state – be it the administration of the Communist Party of China, the Han dynasty or the Ming dynasty, respectively.  These expeditions were also made at a time when the nation was at a rising curve.

At present, China’s activities in space seem to be reflecting the strategies being planned and implemented on the ground, with large constellations of remote sensing, communications and indigenous navigation satellites being deployed in the orbits. In this context, it is important to highlight certain key markers of China’s emerging trends in space activities, which resonate with China’s efforts to revitalise them in the contemporary times.

At a symbolic level, China seems to be “reclaiming” outer space just as it is reclaiming its old Silk Road heritage. Therefore, it is of no surprise that China’s lunar exploration programme was named Chang’e, and its first lunar rover which landed on the moon in 2013 was called the Yutu or “Jade Rabbit”, based on ancient Chinese mythological characters related to the moon.

Also, China’s space station programme is named the Tiangong, or “Heavenly Palace”, the Heaven being an age-old entity of paramount status in Chinese civilisation. The Beidou, or “Compass”, indigenous navigation satellite constellation is a tribute to one of China’s major ancient inventions.

Further, the new Quantum satellite, “Micius”, is named after the ancient philosopher Mo Zi, who pioneered optics as well as defensive strategies. This is a far cry from the early period of China’s space-faring history, when the rockets were named Dong Feng, or “East Wind”, and the satellites were named Dong Fang Hong, or “East is Red”, reflecting Maoist influence.

Hence, at a symbolic level, China appears to be merely following a historical pattern in exploring new frontiers. It also points towards China’s attempt to construct a narrative of its return to civilisational glory with its achievements in outer space.

At the technological level, China is seen to be pushing its new-found spirit of innovation to pioneer new achievements in space. China has been shifting its economy from export-led growth to domestic consumption-led growth, by transitioning from mass-manufacturing to innovation and going up the value chain. Accordingly, the big emphasis placed on innovation is also reflected in the deployment of the world’s first Quantum satellite capable of enabling interception-proof communication, the setting up of the world’s most accurate clock within the new space lab using cold atomic clock technology, and the world’s largest radio telescope, the Five Hundred Meter Aperture Space Telescope (FAST) in Guizhou province.

All these path-breaking feats happened within this year and are indicative of the emerging trajectory of achievements in the coming years. Even in its lunar mission, widely seen as a repetition of earlier missions by other countries, China is attempting to innovate by planning a landing at the far side of the moon by 2018, which has not yet been attempted by any other space power. Just like how the compass technology facilitated Chinese ships to venture into high seas during the Song dynasty, these largely indigenous technological feats have the potential to make China push the possibilities in outer space.

At the strategic level, outer space plays a role similar to territorial buffers on the ground, by providing strategic depth. China has been using space for military applications with its increasing surveillance, military communications and navigation capability, its space programme being essentially military in origin. For instance, the sea denial capabilities of China, based on its anti-ship ballistic missile, the “carrier killer” DF-21D, is heavily supported from space. These capabilities which China has deployed in space effectively generates buffer regions in space, which upgrades territories that are otherwise buffers on the ground into peripheral or even core areas.

Moreover, China’s anti-satellite capability, which it has been demonstrating since 2007, ensures that an adversary’s military satellites which support strategic forces on the ground are always at risk. This aspect also has precedents in the Silk Road, as the territories controlled by Imperial China under the network extended China’s core as well as peripheral territories.

At the commercial level, China has grown from a stage of seeking self-sufficiency in space-faring to one that is capable of exporting its services to a growing space market. China’s space services, especially launches to the geostationary orbit and manufacturing of communication satellites, together with its financing options, have proved to be highly attractive to the developing countries. China has penetrated into an emerging market for space services among these nations, which are increasingly aspiring to utilise the benefits from satellite technology. These include countries like Bolivia, Nigeria, Pakistan, Belarus, Laos, Sri Lanka and Venezuela. China’s recent Silk Road initiatives on the ground too reflect a similar engagement, with a focus on infrastructure creation with developing and less advanced countries of Eurasia, especially Pakistan and Central Asia, as well as Central and Eastern Europe.

In 2015, the China Satellite Global Services Alliance made the emerging synergy between the three realms evident when it announced that the rejuvenated Silk Road on the ground will, in fact, be supported from space. China seeks to do this by establishing satellite data receiving stations in areas covered by the Silk Road project in the coming years. With the attainment of global coverage for its Beidou constellation by 2020, and the establishment of its own space station in 2022, China seeks to take its symbolic, technological, strategic and commercial advances to new heights, aimed at recovering its long-lost centrality in the international system.

This piece was first published on Observer Research Foundation and has been republished here with permission.

Anand V. is a doctoral candidate at the Department of Geopolitics and International Relations in Manipal University, Karnataka, where he is conducting research on China’s strategic culture. His other areas of research interest include China’s strategic capabilities, China’s foreign policy and Sino-Indian relations.