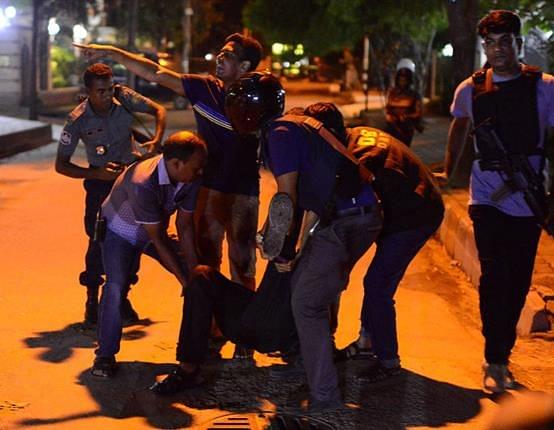 Thursday evening’s attack by Islamic terrorists on a cafe full of foreigners in Dhaka’s upscale Gulshan area should not have come as any surprise. On the contrary, it was surprising that such an attack took so long to happen in a country where Islamic fundamentalists have had a free run killing liberal and secular bloggers and academicians and religious minorities.

Although the Sheikh Hasina government has launched a massive crackdown on Islamic radicals and criminals, Thursday’s attack proves that the Islamic terrorists can strike at will. That is because, as has been stated in this article just last week, Islamic fundamentalists who support the terrorists are deeply entrenched within the security, political, bureaucratic and business establishments in Bangladesh. And it will be a difficult task to root them out.

Though Prime Minister Sheikh Hasina renewed her vow to rid Bangladesh of Islamic terrorism in the aftermath of Friday’s attacks, she is sure to face tough resistance from influential sections of the armed, paramilitary and police forces, and powerful politicians, bureaucrats and businessmen from going all out against Islamic terrorists. In fact, she will have to tackle these powerful people and eliminate them if Islamic terrorism is to be rooted out of Bangladesh. Inevitable though such a harsh step is, it is sure to cause more turmoil in that country.

Sheikh Hasina, who set the process of tackling Islamic fundamentalism in Bangladesh going by getting war criminals responsible for the genocide of an estimated three million Bengali-speaking Muslims and Hindus tried in International Crimes Tribunal, Bangladesh, is herself vulnerable to physical attacks. The failed coup against her in 2012 and the nineteen attempts on her life, the last on 7 March, 2015, by Jama’at-ul-Mujahideen Bangladesh, provide enough indication of her vulnerability.

Many foreign powers, including Pakistan and Turkey, are unhappy with the execution of war criminals and Bangladesh’s crackdown on Islamic radicals. Pakistan has deep tentacles within Bangladesh and has been engineering trouble in that country. It is alleged that Pakistan’s notorious Inter Services Intelligence has deep roots in Bangladesh and frequently foments trouble there.

It is widely believed in Bangladesh that the Bangladesh Nationalist Party (BNP) founded by former military dictator Ziaur Rahman and now headed by his widow Khaleda Zia has close ties with the ISI. There have been reports of Khaleda’s son Tareq Rahman, who is in exile in London, being funded by the ISI. India, too, is disturbed by Rahman’s ISI links and, if the Bangladesh government is to be believed, Rahman also has links with underworld don Dawood Ibrahim.

Now, with Friday evening’s attack on the cafe in Dhaka that left 28, including six of the terrorists who carried out the attack, dead, many foreign powers will have a ready excuse to start meddling in Bangladesh’s internal affairs. The USA and some western countries have already been echoing concerns of so-called human rights activists over the proceedings of the International Crimes Tribunal in Bangladesh, the execution of some hated war criminals who were leaders of the Jamaat-e-Islami Bangladesh, and about alleged human rights violations during the ongoing crackdown on Islamic terrorists and criminals in that country.

Protests over these emanating from Bangladesh, which find resonance among bleeding hearts in the West, are mostly orchestrated by Pakistan and its agents in Bangladesh. India has been standing firmly behind Sheikh Hasina in her fight against Islamic radicals. The courage displayed by Sheikh Hasina and her determination to fight the Islamists in her country are due to this firm support from India.

India has stood solidly behind the Awami League and Sheikh Hasina even when the USA, UK, Germany, the European Union and other powers had interceded on behalf of the BNP to ask for fresh elections after the boycott of the 2014 parliamentary polls by the BNP on specious grounds.

The USA, as this State Department statement shows, questioned the credibility of the elections, but it was only due to India’s unflinching support that Sheikh Hasina was able to withstand such sanctimonious pressures, and Bangladesh did not slip into the grip of the pro-Pakistan BNP. India, at this critical stage in Bangladesh’s history, needs to be unwavering in its support for Sheikh Hasina and her battle against Islamic fundamentalists.

As this fight progresses, there will be more attacks on soft targets in Bangladesh. More Hindus, Buddhists and other minorities, as well as liberal and secular individuals, will be attacked by the fundamentalists. There will be more violence, and more blood will be spilt. But it is critical for India that Sheikh Hasina wins this battle. At the same time, India also has to engage with the BNP to wean it away from Pakistan. But that will take a lot of time and effort and is a long-term project. In the immediate context, New Delhi has to shore up its support for Dhaka.