Emmanuel Macron Wins In France. So What Next? 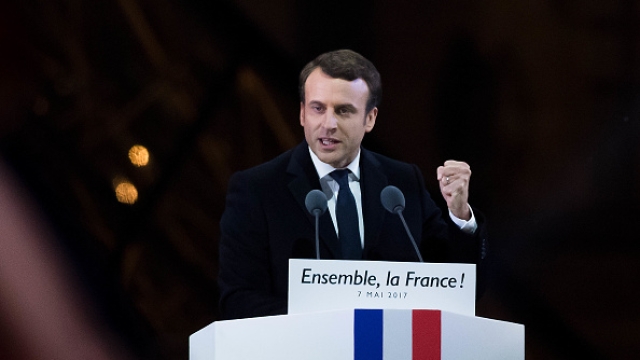 Emmanuel Macron will be the next President of France. All of 39, Macron is certainly the youngest President since the Gaullian republic was proclaimed. The landslide victory of Macron was the culmination of a dream run that began 13 months back when he floated his 'neither left or right' bipartisan political movement, En Marche (On the Move).

A Europhile 'centrist' and an ex-Rothschild banker, Macron's landslide victory is unprecedented – it's the first time an independent candidate, not representing the mainstream parties, has been voted to the office of the French President.

Even the huge email leaks from Macron’s campaign team, which were allegedly a treasure trove of incriminating information establishing his close connection with global big finance and predictably described by his supporters as politically motivated hacking engineered by Russians, did little to mar his electoral prospects.

Though his sweeping victory was seen as a foregone conclusion, the opposition candidate Marine Le Pen of far-right National Front performed credibly. She polled 34.9 per cent, almost twice the 18 per cent won by her father Jean-Marie Le Pen in 2002 establishing the long-term viability and appeal of populist nationalism brand of politics that her party campaigned for. Disillusionment with the parties and candidates in the fray was best reflected in the abstention figures in Sunday’s election. It is estimated that it will be 26 per cent, the highest rate since 1969.

European leaders hailed Macron's victory as a vote for European unity and a blow to political forces that had sought to capitalise on the momentum they gained since last year's Brexit vote to bring down the European Union.

As Macron arrived at the Louvre to address his supporters after winning the elections, European Union anthem, Ode to Joy was played in the background.

Macron appears in front of supporters at Louvre not to Marseillaise but Europe's Ode to Joy. Huge statement as first act as President elect

However, opinion is divided on whether Macron will be the right man to fix the ailing French economy.

Writing in Washington Post, George Will strikes a pessimistic note.

The French… might confer their presidency on a Gallic Barack Obama. …Emmanuel Macron, 39, is a former Paris investment banker, untainted by electoral experience, and a virtuoso of vagueness. …This self-styled centrist is a former minister for the incumbent president, Socialist François Hollande, who in a recent poll enjoyed 4 per cent approval.

George Will adds, In 1977, France’s gross domestic product was about 60 per cent larger than Britain’s; today it is smaller than Britain’s. In the interval, Britain had Margaret Thatcher, and France resisted “neoliberalism.” It would mean dismantling the heavy-handed state direction of the economy known as “dirigisme”, which is French for sclerosis.

France’s unemployment rate is 10 per cent. Public sector spending is more than 56 per cent of France’s gross domestic product (GDP), higher than any other European nation. Macron promises only to nibble at statism’s ragged edges.

The Washington Post writer says Macron will not receive what he is not seeking – a specific mandate to challenge retirement at age 62 or the 35-hour workweek and the rest of France’s 3,500 pages of labour regulations that make it an ordeal to fire a worker and thus make businesses wary about hiring. Instead, he wants a more muscular European Union, which, with its democracy deficit, embodies regulatory arrogance.

Ruchir Sharma, head of emerging markets and chief global strategist at Morgan Stanley Investment Management, though believes that Macron will transform French economy. Writing in New York Times, Sharma argues that, Macron… attributes the nation’s woes not to outsiders – European officials and immigrants – but on France’s own “sclerotic” and unsustainable welfare state. …Macron would work to slim down one of the world’s fattest welfare states, rather than build it up as Le Pen would do.

Of course France has attempted welfare state reform before, without success. The latest effort came last year, when Macron was a minister in the Socialist government, and wrote the Macron laws, opening regulated industries to competition. Those plans set off mass protests, and were watered down, but Macron says there is a big difference now: Earlier governments were not elected with a mandate to downsize the welfare state, while his could be. The case for change has grown more urgent.

According to Sharma, Georges Clemenceau, who served twice as prime minister between 1906 and 1920, cracked that his country was very fertile: “You plant bureaucrats and taxes grow.” Over the last decade state spending has grown even more… It’s tough to say how much state spending is too much, but France has clearly fallen out of balance, and Macron is right that the trend is “no longer sustainable.”

The public payroll is similarly bloated and Macron aims to re-balance the economy by cutting 120,000 public sector jobs, streamlining the pension system and dropping state spending back to 52 per cent of GDP. Macron leads an emerging centrist consensus that recognises that – more than immigrants or the euro – the main obstacle retarding France’s economy is its attachment to a welfare state culture of short workweeks and generous benefits. …In recent years France’s high income taxes have been chasing artists, executives and entrepreneurs out of the country.

According to Sharma, last year, 12,000 millionaires emigrated – the largest millionaire exodus from any country by far. Macron – who once said that stifling taxes threaten to turn France into “Cuba without the sun” – has strong support among young, professional urban voters who would prefer opportunity at home to an expat life in London.