Ethnic Nationalism: Why It Can Be A Powerful Force For Good 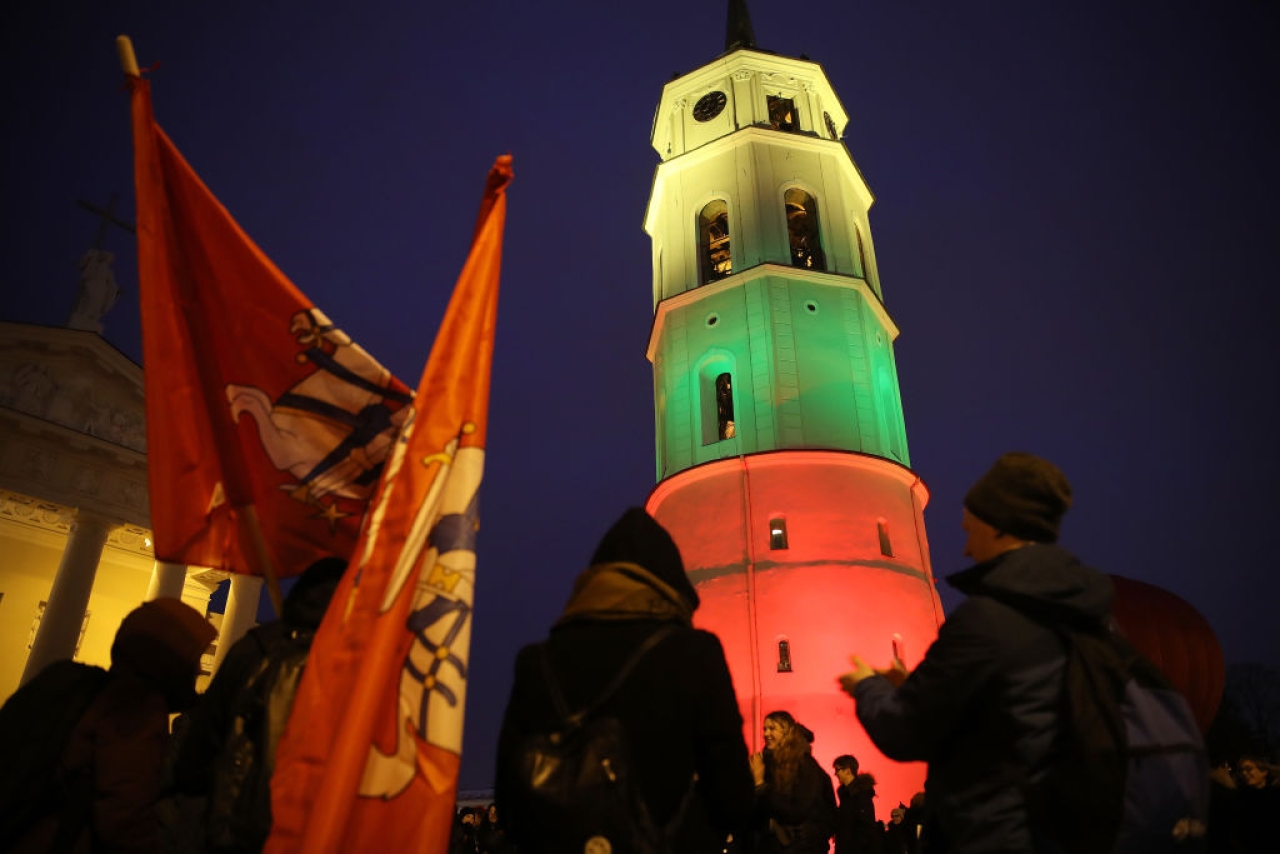 People dance next to the bell tower of Vilnius Cathedral as it stands illuminated in the colours of the Lithuanian flag to mark the 100th anniversary of the restoration of Lithuanian statehood in Vilnius, Lithuania. (Sean Gallup/Getty Images)

Ethnic nationalism is today disdained by many, even as its importance is increasing in the West. But the liberation of Lithuania 28 years ago this month – and indeed the liberation of most of Eastern Europe from Soviet domination – shows that nationalism based on ethnic identity can be a force for good.

Nationalism has numerous critics. Think pieces have linked it to white supremacist ideologies; others have called it “blind infatuation,” “virulent,” a “bad dream,” “poison,” and “arbitrary, dangerous, incoherent, and silly”. Former Belgian prime minister and leading member of the European Parliament Guy Verhofstadt has called nationalism “cancer” and declared it murderous and at fault for the atrocities of the last two centuries. European Commission president Jean-Claude Juncker says borders are the “worst invention ever made by politicians” and called on Europeans “to fight against nationalism”. Those more measured say that nationalism isn’t necessary: “patriotism is enough.”

What all sides agree on, then, is that ethnic nationalism is inherently objectionable and dangerous. But events in Eastern Europe less than three decades ago teach that such a judgement is hasty and unreasonable. In fact, ethnic nationalism can be a powerful force for good. Though we should always be wary of those who misuse it, we shouldn’t fear ethnic nationalism itself. And while it certainly isn’t proper everywhere, it isn’t everywhere improper. To condemn it as evil is to condemn states like Lithuania.

The first Soviet Republic declared its independence from the Union of Soviet Socialist Republics (USSR) just over 28 years ago, on 11 March 1990. The Supreme Council of the Republic of Lithuania, elected the previous month in the first democratic elections since the Soviet occupation, passed the Act on the Re-Establishment of the State of Lithuania. Lithuania was an independent country once again.

Following the declaration, the Soviet Congress declared the move illegal and imposed a three-day deadline for Lithuania to renounce it. When that didn’t work, they enforced an economic blockade. A stalemate ensued until 13 January 1991, when Soviet tanks rolled into the Lithuanian capital of Vilnius, leaving 13 dead. All that accomplished, however, was to delay the process of national independence, not to revert it.

On what grounds had the council defied the USSR and declared Lithuania free? Legally speaking, it adjudged the Soviet occupation that began in 1940 and the subsequent abolition of the State of Lithuania to be illegal acts, and thus pronounced Lithuania’s sovereign powers re-established. Rather than seceding or declaring a new state, it was decreed that independence had never been legally renounced in the first place.

The council claimed to express “the will of the nation”. That is, it derived its moral authority from the right to national self-determination and the nation’s will as made manifest by democratic elections.

The words used are striking. The act refers not to the people or the citizens but to the nation: it is the Lithuanian nation that asserts its rights and independence. As its 1992 constitution declares, the nation is sovereign and creates the State of Lithuania, and without the former the latter is inconceivable.

Which conception of nationhood is at play here? The “benign” civic or cultural one, or the “dangerous” ethnic one?

The Preamble to the Lithuanian Constitution gives a clear answer. It states that “the Lithuanian Nation… created the State of Lithuania many centuries ago… for centuries staunchly defended its freedom and independence… preserved its spirit, native language, writing, and customs… [and embodies] the innate right of… the Nation to live… in the land of [its] fathers and forefathers…” The Lithuanian State founded by the nation “many centuries ago” is the Grand Duchy of Lithuania. This implies that nationhood has in some form existed since then, through the very different ideals and political and cultural milieus of the Polish-Lithuanian Commonwealth, Czarist Russia, the inter-war years, and the Soviet occupation. What had been preserved throughout, the preamble claims, was the nation’s “spirit, native language, writing, and customs” in the “land of [its] fathers and forefathers”. The combination of these – character, language, customs and ancestry – is a pretty good definition of ethnic identity. Ethnicity is thus crucial to the foundation of the Lithuanian nation.

All of this may surprise readers used to the US Constitution’s invocation of “We the People”. The story of Lithuanian independence tells us that an ethnic conception of nationhood and the nationalism that naturally accompanies it can be for the good.

Ethnic nationalism played a crucial role in not just Lithuania’s liberation, but the freeing of all Eastern Europe, as national identities re-emerged, became rallying points of opposition to the Soviet occupation, and then formed the pillars of newly independent nation-states. In Soviet Lithuania, expressions of national identity and nationalist sentiments had been banned. But after the relative relaxation of Mikhail Gorbachev’s Perestroika people were eager to express what they had retained all along by reaching for the old flag and anthem, and using them to help free Lithuania.

It is essential to appreciate that this nationalism was characterised by openness to the world and a desire for close ties with other nations (as the Lithuanian push for EU accession shows), as well as a commitment to the rights of individuals. Thus, Lithuania has enjoyed peaceful relations with its neighbours and retained the aspiration to democratic rule of law, while its constitution explicitly guarantees individual rights regardless of race, origin, or nationality, as well as the rights of ethnic communities.

The key idea behind the ethnic nationalism in question was and is national sovereignty – the idea that Lithuanians should rule themselves rather than be ruled by others. This is clearly distinct from notions such as Lithuania for Lithuanians or Lithuania above everything else.

All too often critics fail to realise that not every form of ethnic nationalism is alike, and instead pronounce judgement on ethnic nationalism as a whole. But there is a crucial distinction between an ethnic nationalism that aspires to national sovereignty and one that aims at national superiority. The former is entirely compatible with a peaceful foreign policy, the rule of law, and individual and minority rights. Distinctions are crucial if we are to make an honest assessment.

The story of Lithuania should help us see that ethnic nationalism is not inherently dangerous. Acknowledging this is not to deny that horrible things have been done in the name of ethnic groups. But it is wrong to conclude that ethnic nationalism as a whole deserves blame, rather than extreme versions of it and the people who use it for evil purposes. The same is manifestly true of other ideologies. After all, the civic nationalism of the French Revolution led to a period that was among the bloodiest in history, while one of the most influential forms of internationalism led to Stalin’s pogroms.

Nor am I claiming that ethnic nationalism makes sense always and everywhere. Some countries, such as the US, are not based on any one ethnic identity, and in such places nationalism should not – could not – be ethnic. Every country is different, and before making universal judgements based on one’s own experiences, it’s always wise to consult the counsel of others.

A more nuanced view of ethnic nationalism reveals what is at stake in the current debate. Once we understand that the idea of ethnic nationhood is at the foundation of Eastern European countries such as Lithuania, we get a clearer view of the true implications of the critics’ arguments. To assert that nationalism is cancerous and the very concept of ethnic identity discredited and dangerous is to suggest that the spinal cords of countries like Lithuania should be ripped out. It is to insist that they should not be the nations that they are. No wonder there is pushback when voices – in Brussels and elsewhere – imply this.

We should not fear or disdain a nationalism that expresses a nation’s desire to rule itself while respecting individuals and minorities – not even if it is based on ethnic identity. Yes, ethnic nationalism can be misused. But as the story of Lithuanian independence shows, it can also be a valuable force for freedom and happiness. The Lithuanian experience should inform our own attitudes towards nationalism and our approach to it in other countries. And the anniversary of the Lithuanian nation’s liberation from the tyranny of Soviet communism is a good time to remind ourselves of this.

Skomantas Pocius is a PhD candidate in the Committee on Social Thought at the University of Chicago. He was born in Soviet Lithuania, and grew up in Finland.

Get Swarajya in your inbox everyday. Subscribe here.
Tags:
247 Shares