Hong Kong's 25th Handover Anniversary Celebrations: Xi Ventures Out Of Mainland For The First Time Since The Pandemic 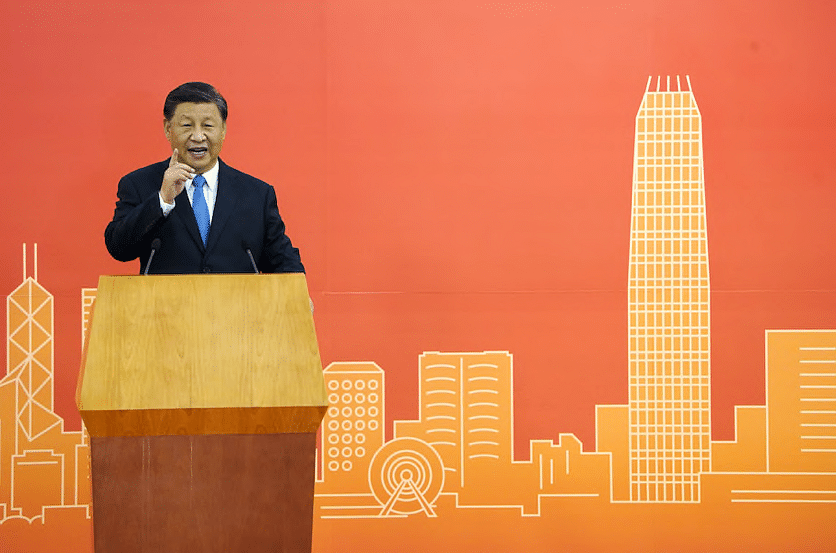 Xi Jinping arrived in Hong Kong on Thursday ahead of the 25th handover anniversary celebrations. This is his first visit outside of mainland China since the beginning of the pandemic.

He will preside over the swearing in of John Lee, the territory’s next chief executive.

Xi's itinerary includes a dinner with the outgoing chief executive.

Beijing did not allow Lam to serve two five-year terms — the maximum allowed under Hong Kong’s Basic Law, or mini-constitution. Nor did Beijing allow the three chief executives before her.

Beijing's goal is to slowly drain Hong Kong of its individual identity and draw it closer to the mainland. Someone serving two terms as the chief executive of Hong Kong and developing a power base of their own, would be a threat.

"Hong Kong has withstood challenge after challenge and won many a battle in recent years," Xi said.

The city has been under strict security lockdown to ensure no protests take place.

"Hong Kong has lived through turbulent times and risen again from the ashes to renewed vigor," Xi added.

He arrived on a special train from Shenzhen with China's first lady Peng Liyuan on Thursday.

On the 1st of July, each year, Hong Kong used to witness a pro-democracy protest march. It had become a tradition. It changed after the imposition of the new national security law. The protest march won't be occurring this year.

"Today, some volunteers and friends from the League of Social Democrats were spoken to by the national security police. We have assessed the situation, and there will be no demonstration on July 1. We hope you can forgive us. We are in a difficult situation," said LSD chairwoman Chan Po-ying.

"Exiled former pro-democracy lawmaker Ted Hui said the reality of life in Hong Kong is very far from Xi's claims, and that Beijing's promise to allow Hong Kongers to run the city under "one country, two systems," had come to nothing," as per a report.

"Xi Jinping called 'one country, two systems' a good system ... but the people of Hong Kong feel very differently. The human rights and freedoms guaranteed in the Basic Law have completely disappeared. Hong Kong is part of one country, and one system now. He says Hong Kong has been reborn from the ashes, but I only see anger in Hong Kong; anger and hatred for the [CCP] regime," Hui said to the publication.

Despite arriving at Hong Kong on Thursday, Xi didn't spend the night in Hong Kong. He chose to spend it in the mainland at Shenzhen. He will return to Hong Kong today morning for the swearing in ceremony.