How Do Movement Conservatives Fit In To The US’ New Political Reality? 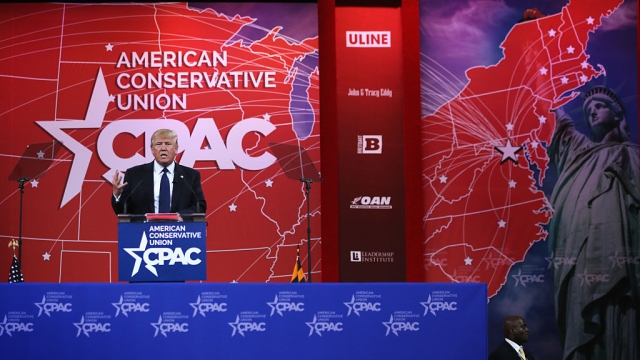 Matt Schlapp: “Can this Trump movement be combined with what’s been happening at CPAC and other conservative movements for 50 years?”

That exchange took place at the Conservative Political Action Conference yesterday (23 February). The annual event, held since 1973, brings together the grassroots activists, politicians and elite media personalities of the mainstream conservative movement for a wide range of speeches and strategy sessions. Trump himself will be giving his first CPAC speech as president this morning (24 February).

Movement conservatives have struck a triumphant tone in the wake of Trump’s victory, but they now face the task of addressing exactly where they fit in relation to the rise of the Trumpian right. Unlike Trump, they did not identify and respond to two key issues that have rearranged the political spectrum: globalisation and political correctness.

Instead of speaking for the people left behind by globalisation, movement conservatives uncritically praised global capitalism, acquiesced in high levels of illegal immigration and supported unnecessary wars in the Middle East. Meanwhile, the spread of trigger warnings and safe spaces led to an extreme counter-reaction in the form of white identity politics, expertly manipulated by Trump and his supporters. And now that Trump has been in office for a chaotic and controversial first month, there have been different responses from the three major components of movement conservatism.

First, classical conservatives, more accurately described as “classical liberals,” believe in free enterprise and limited government. They have little love for Trump and even less for his protectionist economic policies and nativist rhetoric. They are, however, willing to support him in return for tax reform, deregulation and Obamacare repeal.

Second, evangelical Christians, focused on social and cultural issues, are somewhat put off by Trump’s lack of Christian morals, but they are willing to hold their noses and support him if it leads to pro-life victories, such as the recent reinstatement of the Mexico City policy (which blocks federal funding for international organisations that perform or advocate abortions) and a conservative replacement for Justice Antonin Scalia on the Supreme Court.

Third, neoconservatives, responsible for movement conservatism’s liberal-interventionist stance, have been the most vocal critics of Trump’s agenda. Trump’s almost Jacksonian brand of foreign policy is unlikely to ever win over this small but influential cohort.

This lack of consensus within movement conservatism has only deepened its crisis of identity. It is in this moment of confusion that movement conservatives have begun to engage with the Trumpian right at CPAC this week. Appropriately, the first panel to kick off yesterday’s talks was “Conservatism: Where We Come From, Where We Are, and Where We’re Going.”

The Trumpian right is not a single organised unit but a disparate collection of contrarians and nationalists who see movement conservatives as the real enemy. They were given a major platform by Breitbart, a website with an irreverent attitude towards liberal self-righteousness but also a tendency to rely on clickbait to generate publicity and outrage. Breitbart popularised the “alt-right” and provided Trump with Bannon, his closest and most trusted adviser. Breitbart is well-represented at CPAC this year by the likes of Alex Marlow, Joel Pollak and, of course, Bannon himself.

In an important symbolic moment noted above, Bannon and White House Chief of Staff Reince Priebus appeared together in an interview with Matt Schlapp – chairman of the American Conservative Union, which organises CPAC – to encourage this coming together between movement conservatism and the Trumpian right. Bannon clearly defined the Trump administration’s agenda as based on the need for “national security and sovereignty,” “economic nationalism” and the “deconstruction of the administrative state.” If this agenda succeeds, it will be nothing less than a major reconfiguration of what movement conservatism represents.

Despite this engagement with the new nationalist phenomenon on the right, movement conservatives have shunned the more extreme elements, such as Richard Spencer, a white nationalist and leading spokesman for the alt-right, who was thrown out of CPAC yesterday (23 February). Dan Schneider, an executive director of the American Conservative Union, also launched a blistering attack on the alt-right in a speech, saying “they hate the Constitution, they hate free markets, they hate pluralism, they hate everything and they despise everything we believe in.”

The difficulty of treading this fine line was well illustrated by the organisers’ decision to invite Milo Yiannopoulos, the highly controversial self-proclaimed free-speech advocate, to speak. After a video interview surfaced in which Yiannopoulos defended pederasty, the invitation was rescinded. Yiannopoulos also lost his book deal and resigned from Breitbart. His remarks were terrible, but the fact is that Yiannopoulos has always been a vulgar, rude and cruel individual consumed by an insatiable thirst for fame and attention.

That is not to say Breitbart and the Trumpian right have come out of nowhere. Their rise to prominence was made possible by movement conservatism’s obsession with chasing celebrity and headlines, especially on radio and television. This created a space for populists like Sarah Palin and controversialists like Ann Coulter – a space that Trump entered with relative ease.

CPAC itself played a role as well. After Trump’s high-profile support for the “birther” movement, the organisers legitimised Trump as a conservative figure by inviting him to speak in 2013. Trump defeated his conservative rivals by seizing the leadership of a movement that had already made a virtue of brashness and crudity.

For too long, movement conservatism has been narrowly ideological, ahistorical and overly focused on materialism and the individual. Today we live in an age defined more by culture, identity and a popular craving for solidarity and citizenship fuelled by dissatisfaction with globalisation and political correctness.

It will be difficult for movement conservatives to adapt to the new political landscape. Many will stand firm by their belief, as Sabrina Schaeffer of the libertarian Independent Women’s Forum put it yesterday, in a “commitment to a shared set of ideas and principles and to the notion that principles trump identity.” Failing to change will only result in the decline of movement conservatism.

But there are already signs of movement conservatives’ reaching a healthier engagement with these issues. Ramesh Ponnuru and Rich Lowry’s National Review piece “For Love of Country” is perhaps the best attempt so far. They argue for “a broad-minded nationalism that takes account of the nation’s idealism and rationally calculates its economic and foreign-policy interests.” There are limitations to their approach, particularly in regard to their claims that an interventionist foreign policy best serves America’s national interest, but it is a robust start to what should become an ongoing conversation.

Given the turbulence and unpredictability of the past month, it remains to be seen if Trump can bring about truly transformative change. What is clear is that Trump is not an anomaly but the harbinger of a new age in American politics. As movement conservatives consider their future at CPAC this week, they must begin to forge an enlightened nationalism which combines ordered liberty with civic solidarity, and express it in a measured and thoughtful voice.

This piece was first published on The American Conservative, and has been republished here with permission.