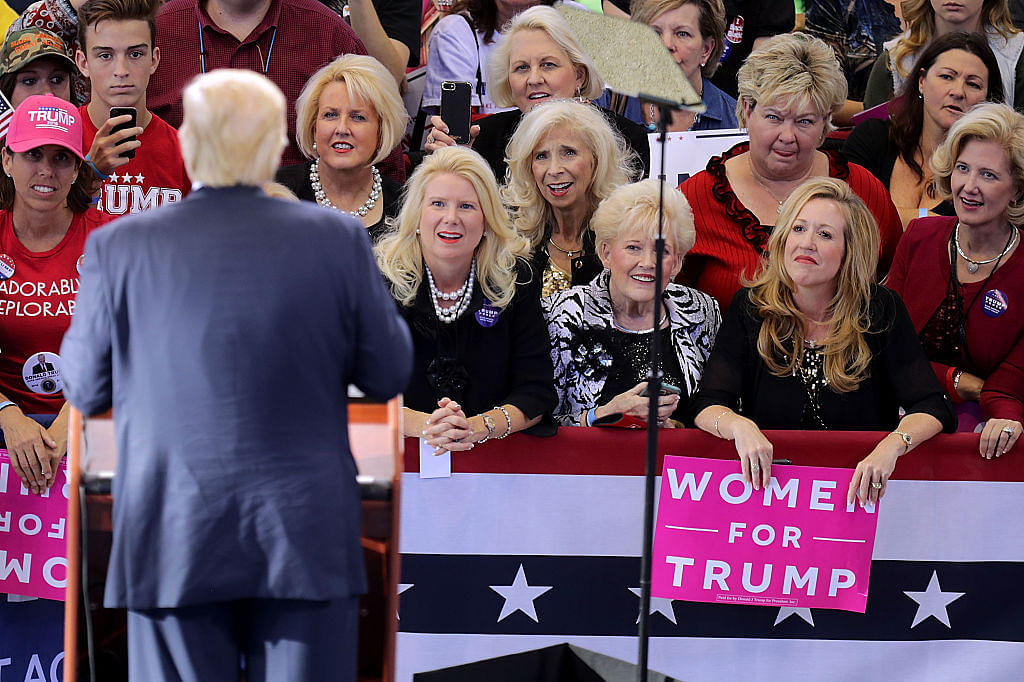 The election of Donald Trump has shaken identity politics to its foundations. Appealing to minorities, women and the LGBTQ population -- the so-called “coalition of the ascendant” -- was supposed to guarantee Democratic rule into something like perpetuity. Yet more than one in four Hispanics apparently voted for a man who has promised to build a wall to prevent other Hispanics from coming illegally to the United States. An angry, isolated Rust Belt working class flipped the race card, placing a successful bet on its own sense of group grievance. And 53 per cent of white women preferred a Mad Men-era womaniser to the would-be first woman president.

That last fact especially should be prompting a serious reckoning among Democratic political consultants and in liberal-media conference rooms. How many times did we hear that women -- more than half the voting population, remember -- would thrill to the prospect of breaking the “highest, hardest glass ceiling?” How many articles chronicled the disgust women felt for the sexist comments and stories of groping by the Republican candidate? The mismeasure of the women’s vote couldn’t be because men were driving the conversation. Over the past few decades, women have filled campaign staff rooms, press pools and media opinion pages.

No, ironically, the problem is that women in media have spun their own cocoon.

Remember: it wasn’t very long ago that journalists were scuffed-shoed beat reporters -- almost all of them men. Their siblings and cousins were nurses, cops and firemen. They were both the sons, and the interpreters, of America’s vast blue-collar middle class.

But in recent decades, journalism has become an enclave of the college-educated, inhabited by the sons and daughters of lawyers and professors who can afford to help them during their many years on campus, in graduate school and working at internships and low-paying entry jobs in New York, Washington and other luxury cities. By the outset of the 2000s, a majority of fledgling educated journalists were women -- or, more specifically, relatively well-off, Title IX-empowered women thoroughly indoctrinated in the history of white-male wrongdoing.

Of course, journalism had attracted prominent, educated Second Wave feminists (those who waged the battles of the 1960s and 1970s). Both Betty Friedan and Gloria Steinem started their careers in the media. But this new cohort was lucky enough to graduate just as the internet began taking over the public conversation. The web was the perfect petri dish for developing the voices and politics of the young women who would become feminism’s Third Wave. Where once the young and naïve writer had to apprentice herself to seasoned media veterans at establishment publications, now she might well find her first job in the new-media adventure park. Instead of submitting to the traditional discipline of old-style “objective” journalism, she could help remake the blah, blah, blah into something more personal, irreverent -- and activist.

In fact, the medium became part of the message. Journalism, gender studies, media and sociology majors -- the young women, like Jessica Valenti, Anna Holmes, Irin Camron and Jill Filipovic, names now well-known to cable news producers and booking agents -- didn’t exactly cover the news: in the early years of the Third Wave and the blogging revolution, they were the news. On sites like Jezebel and Feministing and at lefty zines like Salon and Talking Points Memo, they had the freedom to explore their feelings about sex, men, politics, popular culture and feminism. Speaking to their own (single, educated millennial) peer group, they didn’t worry much about persuasion or analytical rigour.

Soon enough, an ailing mainstream media, trying to diversify staff and desperate to grab the attention of younger readers and viewers, came calling. The bloggers moved into cubicles at the New York Times, Slate, MSNBC, the Guardian, and The New Republic. There they learned to search Google for articles from the expanding oeuvre of gender research to support the positions that they were already convinced were true. They made a formidable sorority: stylish, full of sexy bravado, and, unlike their baby boomer mothers, wholly at ease with technology. Under the auspices of the media and cultural establishment, they quoted one another’s bon mots about the patriarchy and sat on the same gender panels at the 92nd Street Y or at Yale “sex weeks,” where they mocked the Michele Bachmanns of the world. In the past few years, their influence has only grown, as mass-market fashion magazines like Elle, Cosmopolitan and Marie Claire have given them column space, effectively crowning them the new elite experts on women’s issues.

They weren’t. They had heads full of academic theory and millennial angst but little life experience with -- and virtually no interest in -- military wives from South Carolina or Walmart managers from Staten Island, who also happen to fall into the category “women.” Nor did the new luminaries or their bosses seem to notice that the latter group far outnumbered their own rarefied crowd. Luckily for them, when the 2016 election came along, it seemed designed by a goddess determined to make reality conform to their vision of it. Social media had already let loose a seething crowd of loutish young men who enjoy nothing more than taunting the popular girls; their tweets and posts, ranging from the obnoxious to the genuinely threatening, seemed to prove the worst about white male iniquity.

The election itself, pitting a credentialed feminist godmother against a rude Alpha male, was the best gift of all. The Hollywood Access tape, in which Trump could be heard boasting of grabbing women’s private parts; the steady march of women who came forward to accuse Trump of abuse; the disgust of some high-level Republican women, from Ted Cruz staffer Amanda Carpenter to New Hampshire senator Kelly Ayotte: the articles could practically write themselves. And so they did: a slew of titles like “Republican Women Are Done with Trump,” (Politico’s Katy Glueck) and “Republican Women Feel Betrayed by Their Party” (Slate’s Michelle Goldberg) popped up like so many weeds after a thunderstorm.

Still, even as Trump looked headed for defeat, the experts’ gender-identity politics was leading them astray. Plenty of women were not done with Trump. That’s not to say that they didn’t mind the candidate’s “locker room talk.” But, not filtering all reality through the framework of “patriarchy” or “male privilege,” they didn’t see it as disqualifying. Excellent women reporters like Salena Zito and Molly Ball did go to the hinterlands and listen carefully to what women there were saying, without imposing their own priors on them; they weren’t shocked to learn later that 92 per cent of Republican women wound up voting for Trump.

But the media’s anointed experts on women couldn’t see it. Gender-identity politics requires its practitioners to use the oppression of women as the organizing principle for interpreting the world. All issues can be understood as a version of this Manichean struggle -- in the case of the 2016 election, between feminism and misogyny. Relying on a theory from Democratic pollster Celinda Lake, Goldberg argued that women were voting for Trump because they depended on their husbands and did what they were told. Both Lake and Goldberg failed to notice that “glass ceiling,” “harassment” and even “equal pay” didn’t rank with the main sources of working-class discontent such as jobs, the cost of health-care premiums and terrorism.

Working-class and other Trump-leaning women, much like their male counterparts, are well aware that media elites sneer at them (when they bother thinking about them). So great is their suspicion of their self-appointed betters that instead of being appalled by Trump stories, some assumed that the stories were planted. “I think this is the Clinton campaign,” Karen Diehl the co-owner of a southern Ohio insurance company and sometime Republican activist told me when I asked about the lurid Trump headlines. “The media wants her to win.”

In the end, the gender-identity politicos’ assumption that they were speaking for “women” only served to accentuate the class, education and geographic divide that they already personified. The election’s aftermath does not suggest that they’re interested in reflecting on that divide. Instead of trying to find out why so many women failed to conform to their model of the world, they have burrowed back down into gender theory. Emily Crockett, Vox’s “staff writer on gender,” explained “Why Misogyny Won.” Buzzfeed’s Ann Helen Peterson lamented, “This is How Much America Hates Women.” As for Trump-voting women, they were obviously mindless and self-deluded. The election results reveal “internalized misogyny,” wrote New York’s Rebecca Traister, a phrase repeated on MSNBC by Jess McIntosh, director of communications for Emily’s List.

For pure self-delusion, no one could beat Clinton surrogate and Manhattan-raised, Oberlin-educated media darling Lena Dunham, the most famous of the gender experts. Dunham rued the “white women, so unable to see the unity of female identity, so unable to look past their violent privilege, and so inoculated with hate for themselves.” She continued: “It wasn’t supposed to go this way. It was supposed to be her [Clinton’s] job. She worked her whole life for the job. It’s her job.”

Like her comrades in gender-identity politics, the Girls creator and star doesn’t know much about “women,” but she has a PhD in privilege.

This piece was first published on City Journal and has been republished here with permission.