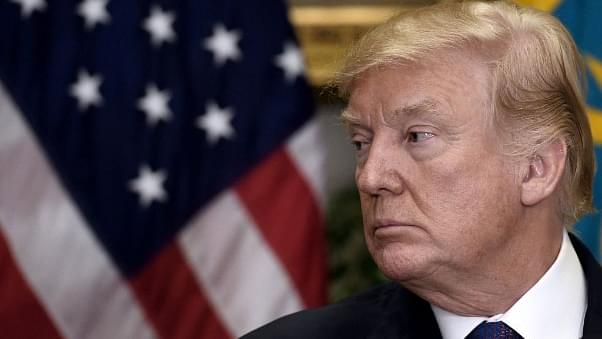 US President Donald Trump in the Roosevelt Room of the White House in Washington, DC. (Olivier Douliery-Pool/Getty Images)

The media chatterati seems to be of one mind: Donald Trump is mentally incompetent and may have to be removed from office before he blows us all to hell.

They say so on Vox, the New York Review of Books, CNN, The Intercept, CNBC, The Nation, Bill Moyers, Salon and the New York Times. A new book, The Dangerous Case of Donald Trump: 27 Psychiatrists and Mental Health Experts Assess a President, concludes that “Trump’s mental state presents a clear and present danger to our nation and individual well-being.”

The solution, to their minds, lies in the Twenty-fifth Amendment to the Constitution, which creates a mechanism outside of impeachment to remove an “incapacitated” president. Trump’s mental state, some believe, qualifies him. Is there a case?

Dr Bandy Lee, one of the editors of The Dangerous Case of Donald Trump, says yes. Her evidence includes tweets that Trump sent threatening Kim Jong-un. She really has no other ammunition: no doctor who says Trump is insane, including Lee, has examined him. No doctor that has examined him says he is insane. All that’s presented are third-party anonymous accusations of incompetence shot through with gossip. A book written by a Hollywood trash reporter is otherwise held up as critical evidence of the inner workings of the president’s mind.

So is there a case without the tweets? Not really. Lee adds that while Trump has not committed violent acts against himself or others, his “verbal aggressiveness, history of boasting about sexual assault, history of inciting violence at his rallies, and history of endorsing violence in his key public speeches are the best predictors of future violence,” and thus concludes he will destroy the world. Lee also weakly points to Trump “being drawn to violent videos”. Oh my.

We might instead look at the actual decisions Trump has made, and those of his predecessors. One president used nuclear weapons to decimate two cities’ worth of innocents, and a set of presidents squandered hundreds of thousands of American lives washing Vietnam with blood. Ronald Reagan was famously caught on an open mic saying he was going to start bombing the Soviet Union in the next few minutes. Another president spread false information about WMDs (weapons of mass destruction) to launch an invasion of Iraq and mocked North Korea’s leader as a pygmy. Obama said he “will not hesitate to use our military might” against the North, knowing that meant Armageddon. Historical psychiatrists say half of our past presidents may have suffered from some sort of mental illness. If Trump is dangerous as president, he would seem to have company.

But how can we know? Trump will never voluntarily undergo a mental competency exam, though courts can order people to submit. But even Lee, who met with congressional representatives to press the case that Trump is insane, admits this is unlikely to happen. “Many lawyer groups have actually volunteered to file for a court paper to ensure that the security staff will cooperate with us,” Lee said. “But we have declined, since this will really look like a coup, and while we are trying to prevent violence, we don’t wish to incite it through, say, an insurrection.”

Still, those arguing Trump is insane and must be removed from office will point to the Twenty-fifth Amendment as just what the doctor ordered.

The framers did not originally include rules for what happens if a president dies or becomes incapacitated. It was just assumed the vice president would serve as “Acting President”. The Amendment, passed after the Kennedy assassination, created the first set of protocols for this sort of situation.

In the minds of the “Trump is Insane” crowd, what matters most is that never-used fourth subsection, the incapacitation clause. People claim because Trump is insane he is unable to carry out his duties, and so Mike Pence, et al, must step in and transfer power away from him. Trump would legally exist in the same status as Grandpa Simpson in the nursing home, and Pence would take over. Among other problems, this imagines that the Amendment’s legally specific term “unable” means the same thing as “unfit”. An unconscious man is unable to drive. A man who forgot his glasses is unfit, but still able, to drive. The Amendment only refers to the first case.

The use of the Twenty-fifth Amendment to dethrone Trump is the kind of thing non-experts with too much Google time can convince themselves is true. But unlike much of the Constitution, where understanding original intent requires the Supreme Court and a close reading of the Federalist Papers, the Amendment is modern legislation. We know the drafters’ intent was an administrative procedure, not a political thunderbolt. The Twenty-fifth Amendment premises that the president will almost always invoke succession himself, either by dying in office or by anticipating that he will be unable to discharge his duties, as in 2007 when George W Bush went under anesthesia for his annual colonoscopy and signed things over to his vice president for a few hours.

The reason the Twenty-fifth Amendment is not intended to be used adversarially is the Constitution already specifies impeachment as the way to force an unfit president out against his will, his unfitness specifically a result of “high crimes and misdemeanors”. The people who wrote the Twenty-fifth Amendment did not intend it to be an alternate method of impeachment or a do-over for an election.

The Constitution at its core grants ultimate power to the people to decide, deliberately, not in panic, every four years, who is president. Anything otherwise would mean the drafters of the Twenty-fifth Amendment wrote a backdoor into the Constitution that would allow a group of government officials, many of whom in the Cabinet were elected by nobody, to overthrow an elected president who they simply think has turned out to be bad at his job.

Accusations of mental illness are subjective, unprovable in this case, and alarmist—perfect fodder to displace the grinding technicalities of Russiagate. Denouncing one’s political opponents as crazy was a tried-and-true Soviet and Maoist tactic, and a movie trope where the youngsters try to get the patriarch shut away to grab his fortune. We fear the mentally ill, and psychiatric name calling against Trump invokes that fear. “The 25th Amendment would require, for mental incapacity, a major psychotic break,” said one former Harvard Law School professor. “This is hope over reality. If we don’t like someone’s politics we rail against him, we campaign against him, we don’t use the psychiatric system against him. That’s just dangerous.”

Trump’s time in office is finite, but what happens around him will outlast his tenure. It is dangerous to mess with the very fundamentals of our democracy, where the people choose the president and then replace him with a cabal called into session by pop psychologists. This is an attack on the process at its roots: you yokels voted for the wrong guy so somebody smarter has to clean up.

Peter Van Buren, is a contributing editor at The American Conservative. He is also a 24-year State Department veteran, and the author of We Meant Well: How I Helped Lose the Battle for the Hearts and Minds of the Iraqi People, and Hooper’s War: A Novel of WWII Japan. Find him at Twitter @WeMeantWell