Kushinagar And Beyond: How PM Modi Is Making Indic Heritage The Driving Force In Ties With Some Asian Nations 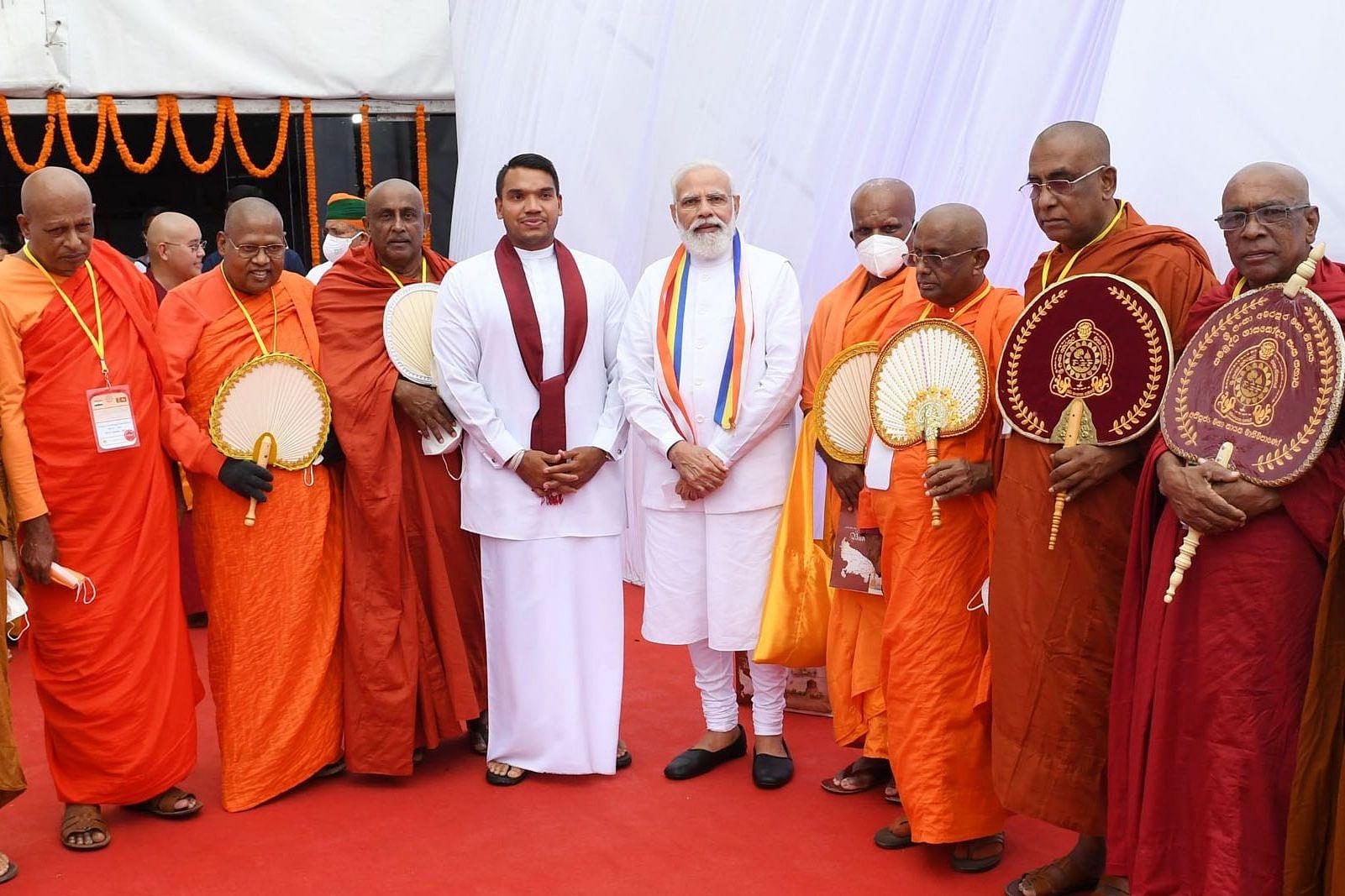 Namal Rajapaksa and PM Narendra Modi at the inauguration of the international airport at Kushinagar, Uttar Pradesh (PMO)

When Prime Minister Narendra Modi inaugurated the Kushinagar airport in Uttar Pradesh on Wednesday (20 October), he did much more than throw open a swanky airport terminal to the public.

The event, in fact, marked an important step in resetting India-Sri Lanka ties that had hit a rough patch earlier this year after Sri Lanka cancelled a contract it had signed in 2019 with India and Japan to develop Colombo port’s east container terminal.

Relations between India and the island nation have been quite chequered and in order to insulate the bilateral ties from periodic upheavals, Prime Minister Modi decided to build on the shared Indic ties between the two countries.

This strategy is being employed not just with Sri Lanka, but also other Asian nations which have a sizeable presence of Buddhists or a strong Buddhist and Indic heritage like Mongolia, Myanmar, Vietnam, Cambodia, Thailand, Laos, Bhutan, South Korea, Nepal, Japan and Singapore.

“Building on shared heritage, which will obviously result in very strong people-to-people contacts and forging very strong bonds between public as well as private institutions, is a smart way to shield bilateral ties from political and economic upsets that have bedevilled the otherwise harmonious ties between India and some of these nations in the past,” a joint secretary level officer of the Ministry of External Affairs (MEA) told Swarajya from New Delhi.

Former MEA officer D K Bhatnagar explained: “Building on shared Indic heritage — religious and cultural — leads to creation of very strong constituencies, both within and outside the governance framework of both nations, that cushion bilateral ties from disagreements and disputes due to political, strategic or economic reasons”.

It is in this context that the opening of the Kushinagar airport assumes great significance. “This airport is a critical spoke in our plan to underline the common Buddhist heritage between India and other Asian nations. This airport will lead to a huge inflow of Buddhist pilgrims from these nations,” said Union Tourism and Culture Minister G Kishan Reddy.

Bhatnagar said that Prime Minister Modi had this grand plan in mind even as he became the PM in 2014. “Of the 19 countries that he visited in his first year in office, India shares strong cultural and religious ties with eight — Bhutan, Nepal, Japan, Myanmar, Sri Lanka, China, Mongolia and South Korea. Modi’s first overseas visit was to Buddhist-majority Bhutan and he was the first prime minister of India to visit Mongolia. Modi’s goal is to make our common Buddhist heritage the bedrock of our ties with these countries,” said Bhatnagar.

One of the primary ways that this goal is being achieved is by encouraging Buddhist pilgrims to visit India, which Modi has repeatedly positioned as Buddha’s karmabhoomi. A huge inflow of visitors to the Buddhist pilgrimage sites in India will not only accelerate economic development of those areas, but also provide fillip to people-to-people ties with those countries and lead to forging strong institutional ties with those countries, explained Bhatnagar.

That is why, says Tourism Minister Reddy, Buddhist circuits are being developed in a mission mode. “The global Buddhist population is around 50 crore and 90 per cent of them live in East and Southeast Asia. But India’s prime Buddhist pilgrimage sites at Sarnath and Gaya attracted a miniscule 0.005 per cent of this Buddhist population, and that was mostly due to poor infrastructure at these places,” said Reddy.

India has nine major Buddhist pilgrimage sites: Bodh Gaya, Sarnath, Kushinagar, Rajgir, Sravasti, Vaishali, Nalanda, Kapilavastu, Sanchi and Nagarjunakonda. But communication links to most of these places are not world-class, and they lack other crucial infrastructure. Many of them even lack decent hotels. All this has kept Buddhists from other countries away from these sites.

“We have achieved a lot in upgrading the infrastructure at all these places, though more needs to be done and we are doing so,” said Reddy. His ministry has sanctioned Rs 100 crore for development of the Buddhist circuit around Kushinagar, Sravasti and Kapilavastu as part of the ‘Swadesh Darshan’ scheme. Another Rs 325 crore has been sanctioned in this fiscal for development of Buddhist circuits in Uttar Pradesh, Bihar, Madhya Pradesh, Gujarat and Andhra Pradesh.

“We want to have better world-class facilities at these sites. We are already seeing a marked rise in the inflow of Buddhist pilgrims and once the pandemic-induced travel restrictions are eased and eventually lifted globally, there will be a huge inflow of tourists to these places,” said Reddy.

A higher inflow of Buddhist pilgrims will boost people-to-people ties that are very crucial for putting bilateral ties on a firm plank. But attracting more Buddhist pilgrims is only one part, though a very important one, of the whole effort.

“We are, at the same time, encouraging and incubating collaborations between educational and research institutes as well as think tanks in India and those countries. The aim is to build very strong constituencies that will advocate and strive for excellent ties with India and, thus, insulate bilateral ties from any political or other setbacks,” said the serving MEA officer.

Bhatnagar provides an example. “Our bilateral ties with, for example, Sri Lanka, often hit road bumps due to political changes and developments in that country. That can be avoided if a powerful constituency that has a strong stake in not only keeping ties with India on an even keel but also strengthening them can be developed in Sri Lanka. A good and organic way of building such a permanent constituency is to leverage the religious, cultural and civilisational ties between the two nations,” he explained.

Prime Minister Modi underlined the importance of Kushinagar in this respect during the inauguration of the airport there. “Kushinagar will serve as an important link to eight sites of religious significance to Buddhists from across the world. Kapilavastu is nearby, and so is Bodh Gaya,” he said.

It is significant that diplomats from the 12 nations (listed earlier) which share Indic ties with Bharat were present at the inaugural ceremony. Fittingly, the inaugural flight that landed in Kushinagar on Wednesday was from Colombo and carried more than a hundred senior Buddhist monks as well as public leaders from the island nation.

The Rajapaksas have had testy ties with New Delhi and are perceived to be close to Beijing. Of late, however, Mahinda Rajapaksa and his brother Gotabaya Rajapaksa (the current President of Sri Lanka) have gone to great lengths to mend ties with India.

It is, thus, significant that the Sri Lankan premier sent his son and heir apparent on an inaugural flight to Kushinagar airport to attend the airport’s formal opening by Prime Minister Modi. “This is evidence enough of the fact that Prime Minister Modi’s efforts to leverage shared religious, cultural and civilisational ties to cement ties with Sri Lanka and other Asian nations is bearing fruit,” said the MEA officer.

Namal Rajapaksa had a meeting with Prime Minister Modi on the sidelines of the inaugural ceremony, after which he said: “Buddhism has been India’s greatest gift to Sri Lanka”. This statement could be a signal for the future upwards trajectory of Indo-Lankan ties.