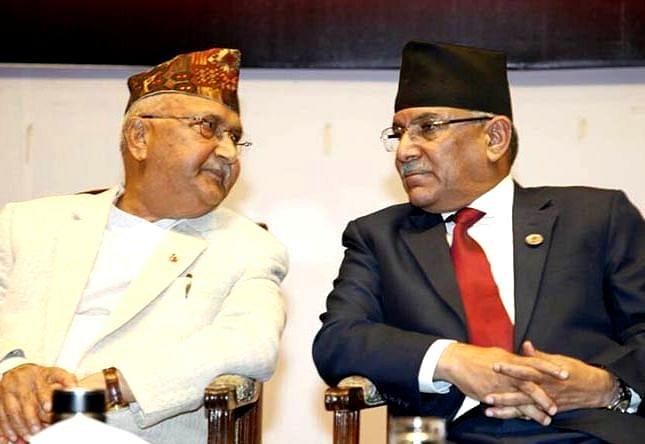 According to senior NCP leaders close to Dahal, the Chinese envoy tried to impress upon Dahal that it is necessary to let Oli remain the Prime Minister to avoid a split in the NCP and till the pandemic is over.

“The Chinese ambassador’s contention was that Oli would step down as Prime Minister on his own in a few months’ time and China would stand as guarantee that he did so. She said China would then support Dahal’s ascension to the Prime Minister’s post,” a top NCP leader who is also a minister told Swarajya from Kathmandu.

Hanqi reportedly told Dahal that if he continues to demand Oli’s resignation, the NCP could split. She told him that Oli wants to continue as Prime Minister for a few more months till the pandemic is over.

However, Dahal replied that he does not trust Oli and that the Prime Minister was simply using the pandemic to cling to power. Dahal reportedly told the Chinese envoy that the NCP is fast losing popular support due to the Oli government’s poor handling of the pandemic and failure to provide succor to the people.

He argued that if Oli remains in power, Nepal and its people will suffer. He also made it clear to Hanqi that Oli had sidelined and humiliated all senior leaders of the party and they did not want him to continue any longer.

Dahal also pointed out that Oli had repeatedly gone back on agreements and assurances to share power (read this and this) and he does not trust Oli any longer. Hanqi is then said to have said that China will ensure that Oli steps down from the Prime Minister’s post after a few months.

But Dahal was unwilling to buy that assurance. Hanqi also tried to impress upon Dahal that Oli needs a face-saver. If he is forced to step down now, it will be a major blow to his self-respect and image. Dahal is said to have cryptically replied that the image and self-respect of other NCP leaders also matter.

Hanqi had been seeking an appointment with Dahal for over a week now, but the latter had been fobbing off her requests. That’s because, said the minister close to Dahal, he (Dahal) knew that Hanqi would be trying to intercede on Oli’s behalf and try to buy time for him.

China wants Oli to stay on as Prime Minister in order to protect its interests in Nepal. “Beijing is very comfortable with Oli since it knows very well that Oli will do its bidding. Oli has been doing whatever China wants all this while and the ratcheting up of tensions with India was just one example of how he does what Beijing wants him to do,” said a senior NCP leader who was once close to Oli and belonged to Oli’s Communist Party of Nepal (Unified Marxist-Leninist).

China, said the NCP leader, is not very certain that Dahal or any other leader would be so subservient to it. “China trusts Oli completely. And that is also one reason why Oli can afford to behave so arrogantly and snub senior party leaders. He knows that he has Beijing’s full backing. But China is not so sure about other leaders doing its bidding as faithfully as Oli,” said the NCP leader.

According to China’s assessment, Dahal, Nepal and Khanal--the three senior most leaders of the NCP--have independent streaks that make them unreliable. At a time when China wants to bully and corner India, it is very important for it to have its acolyte in power in Kathmandu.

Thats’s because Beijing’s man in Kathmandu will play a complementary role and also cross swords with India in a matching and coordinated manner as scripted by Beijing, exactly as Oli has done. China trusts only Oli to do this, and also to completely protect its interests in Nepal.

While the meeting between Hanqi and Dahal ended inconclusively, the two did agree to keep in touch and meet again. Dahal is said to have told Hanqi in very clear terms that she should convince Oli to step down from the Prime Minister’s post.

Dahal said he would be willing to let Oli take over as executive chairperson of the NCP, but with clearly defined powers and provided he runs the party in close consultation with other senior leaders. In case Oli takes over as executive chairperson of the NCP, Dahal wants rules to be framed limiting his powers and making it mandatory for all major decisions to be vetted by a committee of senior ladders of the party.

Dahal also told Hanqi that the NCP will emerge stronger if Oli quits the PM’s post. As for the danger of the party splitting, Dahal said that he would like to avoid that. However, there would be no stepping back from the demand for Oli’s resignation from the PM’s post.

Oli’s close aides have also come around to the view that it would be better for him to relinquish the PM’s post and concentrate on party affairs. They feel that if Oli sheds his confrontationist and unilateral style of functioning, he can emerge as the most important leader of the party.

Meanwhile, negotiations between Dahal and Oli remain deadlocked with the duo failing to find any common ground. The two have held five one-on-one meetings since Sunday, but have not been able to hammer out any compromise.

A meeting of the NCP standing committee, which was to resume on Thursday, has been postponed once again to Friday. This, say NCP leaders, is an indication that talks are deadlocked.

As many as 30 of the standing committee’s 44 members want Oli to resign from the posts of Prime Minister as well as party co-chair. Last week, they told Oli on his face he would have to step down. Oli is thus reluctant to face the committee again without a compromise being arrived at.