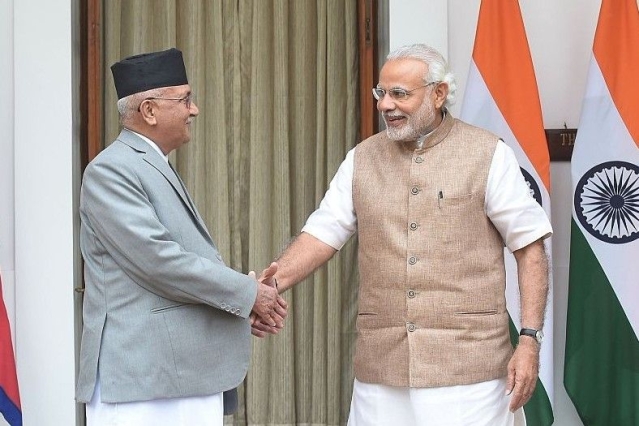 A concerted push by New Delhi has put India-Nepal ties, which got derailed over territorial disputes earlier this year, back on track.

The strongest indication of a significant upturn in bilateral ties came earlier this week when Nepal agreed to fast-track a railway line from Kathmandu to Raxaul in Bihar’s East Champaran district.

According to Nepali news portal Ratopati.com, Kathmandu has approved a proposal by India’s public-sector Konkan Railway Corporation Limited to prepare a detailed project report for a new rail link between Kathmandu and Raxaul.

Rabindranath Shrestha, secretary in Nepal’s Ministry of Physical Infrastructure and Transport, said the finalisation of the DPR will be followed by the start of construction of the 136 kilometre rail link.

India had proposed this rail link to Nepal during the 4th BIMSTEC Summit held at Kathmandu in August 2018.

But the K P Sharma Oli government in Nepal has been holding out on green-lighting the project that will boost Nepal’s exports.

That was followed by Army Chief General Manoj Mukund Naravane’s three-day visit to Nepal in the beginning of November.

Nepal’s Foreign Minister Pradeep Gyawali is scheduled to visit New Delhi later this month for talks with his Indian counterpart S Jaishankar and other Indian leaders.

Once the DPR is approved by technical experts, the Nepal government will award the contract for the construction of the 3 trillion Nepali Rupee railway line to Indian Railways. About 42 kilometres of the tracks will pass through a tunnel.

Nepal’s decision to go ahead with India’s proposal for the rail link represents a big setback to China.

China has been keen on constructing a rail line from Gyirong in Chinese-occupied Tibet (CoT) to Kathmandu and then extending it to Lumbini, right next to the Indo-Nepalese border.

Earlier this year, China started the groundwork for the 160 kilometre Kathmandu-Gyirong rail line that is estimated to cost $4 billion (Rs 29,465 crore)

Indian strategic experts have been apprehensive of China’s plans to construct the railway line right until Lumbini since it would be easily used by China to transport troops and armaments very swiftly to India’s border in the event of an outbreak of hostilities between the two countries.

Lumbini is just about 125 kilometres north of Gorakhpur. The rail link from Gyirong to Shigatse in CoT is nearly ready. Shigatse is already linked to Lhasa, and then to Beijing, by high-speed railway tracks.

Beijing had told Kathmandu that the rail line to Lumbini will facilitate tourism and also help Nepal boost its exports to India.

Also, there is a disparity between Indian and Chinese railway tracks that will defeat any Chinese plans to use the proposed  rail link from Kathmandu to India to transport its own troops and armaments right to the Indo-Nepalese border.

Also, the Gyirong-Kathmandu rail link is still clouded in uncertainty since Nepal is unwilling to agree to China’s request to share the cost of the project.

Nepal is yet to agree to Chinese terms for financing the whole project and seems to be having a re-think on it.

Also read: Why Nepal’s Proposed Rail Link To Tibet Will Put The Country On A Slippery Slope