Pragmatism Back on Indo-Nepal Agenda 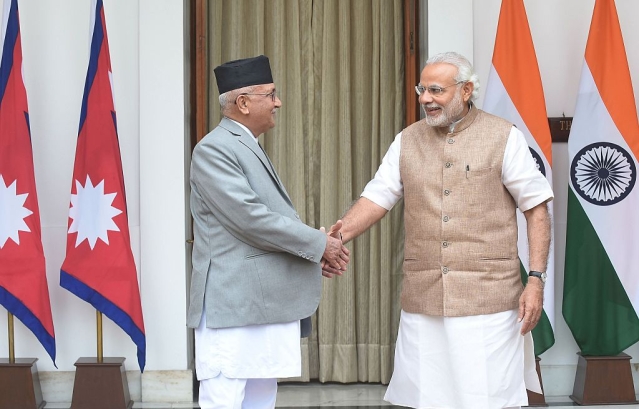 Cultural, historical and religious affinity often masks the ordinary Nepali’s simmering political discontent against India. It erupts and manifests itself sharply during any internal crisis in Nepal. This deep-seated antagonism towards India was further stoked by Nepal government’s insinuations (corroborated by Nepal’s media) that India was blocking the supply of essential goods into Nepal during the recent Madhesi agitation.

In a break with tradition, Nepal Prime Minister K P Sharma Oli proposed a visit to China for his maiden foreign tour, post- assumption of office.

There were numerous blunders by India also, including the delays in using alternate supply routes to provide essential goods to Nepal. This intensified Nepal’s economic suffering during the Madhesi agitation.

However, it seems like pragmatism and better sense has prevailed on both sides.

PM Oli visited New Delhi in February 2016 (before visiting China in March), and signed a bunch of MoUs with Prime Minister Modi. Nepal also commenced a public diplomacy initiative to improve communication, as well as to inform and engage the Indian civil society on the multiple areas of bilateral cooperation. As part of the exercise, an inaugural discussion on ‘Nepal’s Reconstruction Agenda – Opportunities and Challenges’ was held in New Delhi on April 13, 2016. Stakeholder inputs from the discussion will be used for commissioning further research.

The discussion was centred on the participation of the international community in reconstruction efforts, the economics of a drawn-out reconstruction exercise, the areas of collaboration between India and Nepal, and, how to incorporate efficiencies into India’s monetary and non-monetary support given towards Nepal.

There was a common thread running through the deliberations; the centrality or importance, of the local knowledge and the indigenous technologies for the reconstruction efforts. To that extent, there was an emphasis given to the fact that the international aid agencies should desist from super-imposing global disaster-management solutions that are divorced from Nepal’s cultural, social and architectural inheritance.

The public diplomacy programme comes at the right time. Nepal’s political and social stability is in India’s interest, given the long and porous border between both the countries.

Nepal faces enormous challenges in its post-disaster reconstruction and rehabilitation programme, which is estimated to cost around $7 billion. India has pledged to administer a sum of $1 billion as reconstruction aid, 40% of which is in the form of grants and the balance as soft loans.

Another $1 billion was promised during PM Modi’s visit in April 2015 through Lines of Credit (LOCs, concessional loans for projects identified by Nepal, disbursed by Exim Bank of India and guaranteed by both the governments). Many of these lines will probably get allocated for the quake-related infrastructure works.

This is the third LOC sanctioned by India, with two earlier tranches totalling $350 million. Many projects under the earlier tranche have been delayed due to either capacity deficits, or bureaucratic hurdles, on both sides. The discussion focused on how the new $1 billion LOC tranche could be used expeditiously and efficiently, with regard to the lessons learnt from earlier LOCs, for re-building both physical and social infrastructure.

Physical infrastructure, especially roads and power generation and distribution is critical for reconstruction of the quake-affected areas. While the Madhesi agitation forced the Nepal government to explore alternate supply routes, and Oli signed agreements with China to allow Nepal to export and import through Chinese ports, it will be some time before Nepal can seriously think of using China as a trade corridor.

There was an unanimity observed during the discussion that transporting petroleum products across the China border is uneconomic, given that the challenging terrain of the Himalayan range impedes smooth movement of large oil tankers.

India, on the other hand, has deployed Vishakhapatnam as an additional transit port for Nepal’s foreign trade. Currently, Nepal’s imports transit through Kolkata port only.

Participants at the public diplomacy forum were also informed that the Oli government has started addressing domestic misgivings over the Nepal-India power trade. A 132kv line from Muzaffarpur, India, has already started supplying 80mv of power to Nepal; this capacity is expected to be upgraded to allow the transmission of 600mv by 2017. The transmission lines being laid for this project will be used by Nepal for both export and import of power, especially once the hydro-electrical projects are completed.

India and Nepal not only share a 1750km long, porous border but also a unique people-to-people relationship (many Nepali citizens, for example, own land and property in India). India is also Nepal’s largest trade partner and contributor of foreign direct investment (FDI).

Although, political gamesmanship often vitiates this deep association. It is unfortunate that the egregious, short-term political objectives have now necessitated a public diplomacy programme on a bilateral relationship that is so intricately inter-twined.

This article was first published on www.gatewayhouse.in.