QUAD: Here Are The Profits And Pitfalls For India If We Formalise An Anti-China Bloc 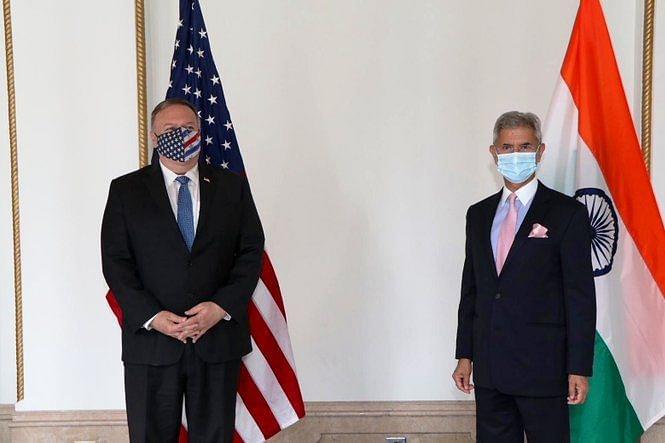 On 6 October, the foreign ministers of India, Japan, Australia and the United States met amidst the coronavirus pandemic as part of their continued efforts to revive the Quadrilateral Security Dialogue or QUAD.

This grouping of four democracies was revived in 2017 to counter China’s growing influence over the South China Sea. The dragon’s Belt and Road Initiative (BRI), debt-trap diplomacy and expansionism are concerns that have led to fairly regular interactions between the member states both in 2018 and 2019.

However, despite renewed efforts, the QUAD has faced criticism over its lack of formal structure. There have been calls for institutionalisation, a formal agreement to transform the group into a formidable anti-China bloc.

While India has been historically hesitant over explicitly defining its anti-China associations, the recent border confrontations at Ladakh give us enough cause to reassess the profits and pitfalls of such formalisation.

The grouping traces its genesis to 2004 when the four countries came together to coordinate relief operations in the aftermath of the tsunami. It then met for the first time in 2007 on the sidelines of the Association of South East Asian Nations (ASEAN) summit. The intention was to enhance maritime cooperation between the four nations. However, QUAD 1.0 met a lacklustre demise.

The resignation of its main proponent Prime Minister Shinzo Abe of Japan along with Australia’s decision to stop uranium sales to India and its desire to improve ties with China, and the lack of a strong commitment from the United States — all led to its spectacular failure.

A lot has changed over the years. Each member state has faced the heat of China’s increased aggression. China has grown in might and influence and is keen on picking up fights. After attempting to influence Australia’s domestic policies, it slapped punitive tariffs on the country. It is engaged in what has become a routine border confrontation with India.

China has flared up territorial disputes with Japan with regards to the Senkaku Islands and is battling a fully-fledged trade war with the United States. It has exported a deadly virus to the world and has refused to take responsibility for the pandemic.

The four countries today have greater grudges against the dragon than they did during QUAD 1.0. Therefore, the reincarnated QUAD has greater potential.

The recent Tokyo meet saw the iteration for a “free and open Indo-Pacific” however, what was also displayed was a lack of commitment. There was no joint statement, instead each country issued individual statements. Amidst oblique references, America was the sole country to specifically call out the Chinese Communist Party.

The QUAD is often called a coalition without commitment. It, in its present form, is nebulous without a structure or a secretariat. The United States is keen on institutionalising the QUAD and wants to shape it on the lines of the North Atlantic Treaty Organization (NATO), an Asian NATO of sorts. It seeks to militarise the alliance.

So far the QUAD has operated in the realm of strategic dialogue, white paper iterations and occasional military drills. As Japan and Australia already have military alliances with the United States, the success of formalisation hinges on India’s participation. Delhi has been cautious in its approach. It has much to gain in cementing its military ties. Such an alliance would be a useful counter to China’s string of pearls and its all-weather friendship with Pakistan.

Steps have already been taken to further cooperation in this regard. India has conducted joint exercises and maritime drills in the Indian Ocean with Japan and the US. India, Japan and the US are part of the annual Malabar Military Exercise, and India is planning to extend Australia an invite — a move it earlier held off out of fear of antagonising China.

However, the present structure or rather the lack of one has its own benefits. It allows India significant diplomatic posturing without negating the scope of de-escalation with China.

Delhi has recognised QUAD’s potential as demonstrated by Foreign Minister S Jaishankar’s opening remark at the Tokyo meet: “The fact that we are meeting here today in person despite a global pandemic is a testimony to the importance that these consultations have gained, particularly in recent times.”

However, his veiled references to China and the QUAD falling shy of collectively naming the dragon signals India’s desire to keep out external interference in its bilateral matters.

The loose structure also prevents the QAUD from becoming a closed exclusive club. It accommodates the interests of the member states while providing for incipient expansion and multilateralism.

For example, in March this year, a teleconference regarding the coronavirus pandemic with the QUAD members saw the participation of New Zealand, South Korea and Vietnam. This allows India to use the platform to enhance engagement with not just stakeholders in the Indo-Pacific region but also amongst countries world over that regard China as a global threat.

Additionally, the QUAD has served the function of taking off the heat from the diplomatic networking India has performed on the sidelines. India has successfully upped its bilateral, trilateral and quadrilateral engagements with members of the QUAD in terms of both defence and trade partnerships.

QUAD is, through its intent, a label, a geostrategic vision and a foreign policy instrument for India to balance China via global networking. When a tipping point is reached, it provides scope for the forging of an alliance amongst the world’s most formidable militaries. Until then, the QUAD’s future as a platform for multilateral engagement is secure.