Russia And Saudi Arabia Seem To Be Creating A ‘Crude War’, But What Do They Seek To Conquer? 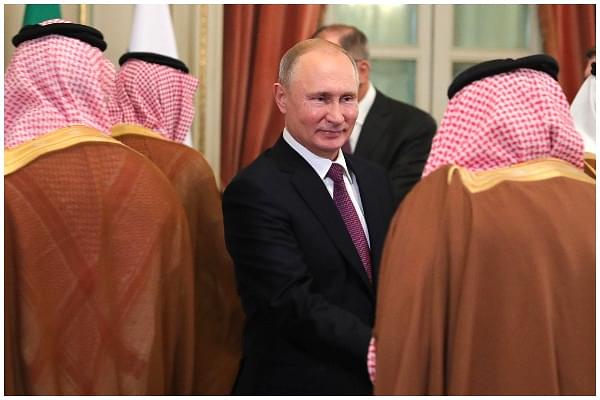 Brent crude price saw a virtually unprecedented 30 per cent intraday fall today (10 March), and is currently trading near $35/bbl (down 20 per cent on the day).

The oil market that was already reeling under a Covid19-led demand shock, saw a double whammy as Russia scuttled (Oil Producing and Exporting Countries) Opec’s plans to support oil prices by cutting production by a further 1.5 million barrels per day (mbpd, 1 barrel = 159 litres). Note that total global crude production is in the vicinity of 94 mbpd.

Opec is a cartel of 14 oil producers that accounts for about 79 per cent of global proven oil reserves, and 30-35 per cent of supply.

Saudi Arabia (33 per cent) has the largest share of production amount Opec members , followed by Iraq (16 per cent) and UAE (10 per cent).

Notably, Russia is not a part of the Opec cartel but as the second largest producer of oil globally (after Saudi), it does have significant influence on prices.

Russia pulled out of output cut discussions stating that it was still assessing the impact of Covid19, and would not act prematurely. In retaliation, Saudi is set to actually increase production and offer deep discounts to its biggest customers to grab market share.

This set into motion one of the biggest crude price crashes in recent memory.

It is widely speculated that Covid19 is a cover for Russia’s (and perhaps even Saudi’s) true target, i.e. US Shale Oil Companies.

This makes the extraction dearer than traditional oil wells, and is thus viable only at elevated oil prices. Consequently, between 2011 and 2014 when global prices averaged at $100/bbl, USA's oil output rose from 5.5 mbpd to 8.9 mbpd largely on the back of tight oil.

Consequently, the  dominant narrative today is that Russia is amplifying the impact of Covid19 on oil by contributing to a supply glut, thus making tight oil production nonviable.

After all, US Shale oil (average production 8.61 mbpd) companies have US$ 86 billion of debt maturing between today and 2024.

60 per cent of these maturities are rated below investment grade, and the refinancing of such ‘junk’ bonds will peak by 2022. Weak oil prices will make this refinancing difficult, and thus reduce the dominance of shale oil companies.

If this is indeed true, then it would follow that, perhaps, even Saudi Arabia is ‘in on it’. After all, shale oil dents the Opec (and Russia’s) hegemony on global oil supply and in a way acts as a leash on oil prices.

It is also worth noting that a study suggests the shale oil industry contributed 10 per cent to the increase in US GDP in recent years. Given the economic implications, the move by Russia is particularly interesting given that it comes in an election year for America.

A weak economy makes the road to a second term that much more rockier for President Trump, who has been accused by his opponents of being a ‘Russian agent’.

While the mainstream narrative (i.e. of Russia vs. US Shale Oil) may well be true, this author is not entirely convinced.

This is primarily because it does not seem to be an insurmountable hurdle for the USA, despite what the steep decline in Shale producers stock prices will have one believe.

Secondly, there is a strong argument for the US government to step in and bail-out a strategic asset.

In an earlier note, I had highlighted the dominance of high risk debt in USA, and neither the Fed, nor the US government would want spreads to blow-up derailing the economy.

Also, US$ 86 billion is not an amount that cannot be ‘managed’ for the larger goal of energy independence by the USA.

However, both economies are heavily dependent on oil to balance their budgets. Saudi requires oil price to sustain at US$83-85/bbl while Russia requires a level of US$42.

Oil is already well below these levels, bringing into question the longevity of this perceived gambit.

While Saudi with its spare capacity (2.5 mbpd) to increase total revenue may have an upper hand vis-a-vis Russia, it is difficult to see the lever being pushed beyond a point at a time oil faces a demand shock.

Note, that despite a similar production cost, Iran requires crude prices to stabilise near US$194/bbl for it to meet its fiscal obligations. Iran’s finances have become progressively weaker over the past two decades.

This comes at a particularly weak time for Iran with unofficial numbers for the infected going through the roof.

Even the official number of 7,161 puts Iran in the top quartile of impacted countries.

It is likely that if the current stress continues, citizens of Iran, who find themselves between a rock and a hard place, may think of a regime change.

In fact, Iran appears to be the most impacted by this apparent tug-of-war, especially given that it is already reeling under the Covid19 epidemic.

To this author, the impact of Russian (and perhaps Saudi) machinations appears more immediate and drastic on Iran, than on the US (as is being widely focused upon).

Whether this is deliberate, or a side-effect is anyone's guess. To me, the consensus appears too straightforward, simplistic even.

And one wonders if the consensus of Russia vs. US Shale oil is merely the ‘pledge’ (as they say in magic), the Saudi retaliation...’the turn’, but the prestige is something else.

This piece was originally published on Eco Political and has been republished here with permission.