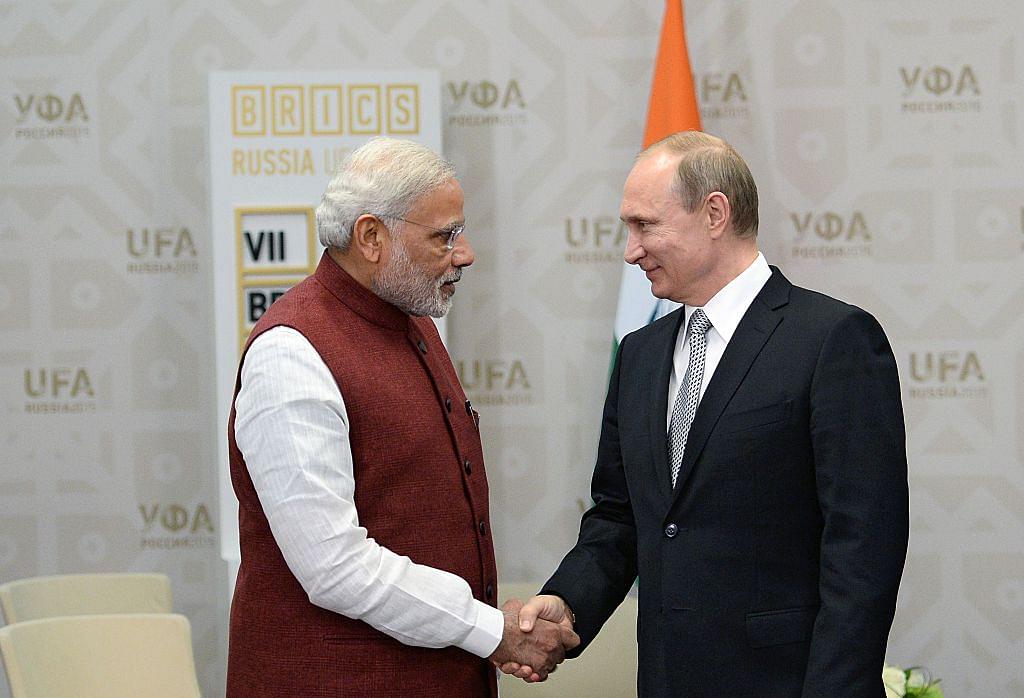 In December 2021, Swarajya reported that India and Russia had decided to actively pursue the operationalisation of dedicated trade routes between the two countries. This was one outcome of the Narendra Modi-Vladimir Putin summit held in New Delhi early that month, when murmurs of a possible upheaval in Ukraine had started to grow.

The two leaders’ joint statement said that they intended to increase trade along the International North South Transportation Corridor, which runs over land and sea from Russia, through Iran, to India. Very importantly, the statement also stated that India would increase crude oil offtakes from Russia, and that both countries would explore the possibility of activating the Arctic Sea route for shipping crude oil from Russia to India.

(As an aside, those governments and commentators who today grumble that India has pulled the rug from under the West’s sanctions of Russia, by increasing purchases of crude oil from Russia, should first read the December 2021 joint statement, in which such intent was publicly declared, well before the Ukraine conflict broke out)

These decisions were deeply strategic, since the trade routes bypassed the perennial geopolitical uncertainties which persist in Central Asia, the Middle East, the Suez Canal, the Western Indian Ocean, and the South China Sea.

Six months later, there is now news that a trial load was successfully despatched on 11 June, from St. Petersburg on the Baltic Coast in Russia, to Nhava Sheva Container Terminal in Mumbai. The transit is expected to take only 24 days, against the 40 days needed for the Red Sea route, and will become faster once the trans-Iranian railway is commissioned next year.

This is a significant development, and follows on the heels of Iranian foreign minister Dr. Hossein Amir Abdollahian’s first visit to India after he took office in August 2021. The Indian foreign office press release issued after the visit made specific reference to the boosting of regional connectivity through Iran.

The INSTC is the shortest, fastest, cheapest and most secure trade route between India and Europe. It passes through just three nations, Russia, Iran, and India, all of whom are essentially impervious to external pressure, the inland Caspian Sea, which is Russia’s preserve, and a short maritime run from the Persian Gulf to the Arabian Sea, which is dominated by India.

As a map above shows, the route has five nodes and four segments. Good departing St. Petersburg travel by rail to a container terminal at Solyanka, in Astrakhan, where the Volga River meets the Caspian Sea. From there, the goods are moved by ship to Bandar Anzali, a port in Iran at the southern end of the Caspian Sea.

From Bandar Anzali, the goods will move via a rail network to Chabahar port in south-eastern Iran, near the Pakistan border. And finally, from Chabahar, they will go east by ship through the Gulf of Oman, and the Arabian Sea, to Nhava Sheva.

However, in this trial run, the goods will be sent by road from Bandar Anzali to the port of Bandar Abbas in the Persian Gulf. The reasons are unknown.

This test of the INSTC is a symbolic landmark with many geopolitical implications.

First, it establishes a new, secure trade route across Eurasia which is both swift and cost-competitive. Because of its geography, the INSTC is also not generally prone to natural disasters like landslides, avalanches, floods or cyclones.

Second, it becomes a formal competitor to China’s ambitious Belt-and-Road Initiative (BRI), since goods can be sent further east from Nhava Sheva, via the land bridge to Chennai port, to anywhere in the rest of Asia (and vice versa).

Third, it reduces Iran’s isolation imposed by the West. No external party can police the INSTC’s Iran-Russia segment passing over the Caspian Sea, since that falls under the Russian sphere of influence. Similarly, it is unlikely that the West would go to the extent of blocking a ship exiting an Iranian port for Nhava Sheva, since you can’t have your Quad and embargo it too.

Fourth, it also reduces current Russian isolation significantly. That would be galling to America, since it partly negates the sanctions they imposed, not to mention a profitable rehabilitation of their other enemy – Iran.

As a result, India can expect more statements from American officials on how minorities are treated, and they in turn, can expect to be treated to more embarrassing zingers and put downs by our Dr. Jaishankar.

Again, the question is: how far can America go to achieve its interests, at the cost of India’s interests, without weakening America’s position in the ‘Indo-Pacific’?

Fifth, the INSTC presents an attractive option for traders in Europe. Now, access for goods via the INSTC to western Europe is not presently allowed, because Russia has been isolated by sanctions, but this is only transitory.

At some point of time, when their wallets begin to pinch, money will roar louder than the reckless course Europe has embarked upon in Ukraine. In fact, there is already talk of resurrecting the nuclear deal with Iran, and America is apparently awaiting a ‘constructive response’ from Tehran, as a precursor to easing sanctions.

Sixth, the more the INSTC establishes itself, the riskier an investment China’s CPEC will seem (the China Pakistan Economic Corridor; being built from Xingiang province in China, passing illegally through Pakistan-occupied-Kashmir, to Gwadar Port on the Makaran Coast in Baluchistan).

And finally, seventh, if ever a definition of multipolarity was needed, the INSTC is it. Today, the cargo on the test run is a token 40 tons of wood laminates, destined for India, at a time when the West is engaged in a proxy war with Russia, in Ukraine, and has treated Iran the way it has for four decades. Tomorrow, it could be sweet Iranian crude from the new, giant West Karoun oilfields complex presently being developed.

The establishment of a major new trade route like the INSTC is a good indicator of how the world is changing.