Support For Kashmir Plebiscite Is Outrageous: An Open Letter To British MPs 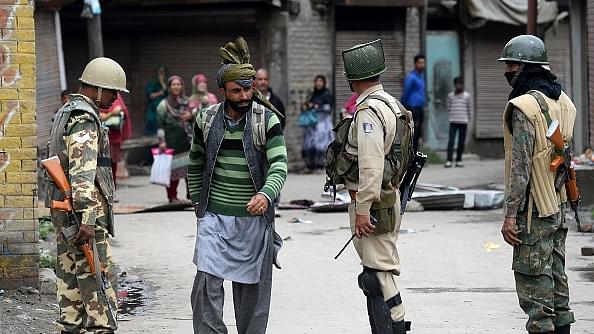 Indian troopers look on as a Kashmiri pedestrian walks along a street in Srinagar. (SAJJAD HUSSAIN/AFP/Gettymages)

The recent debate in the House of Commons on India’s Jammu and Kashmir (J&K) state is a cause for serious concern and dismay. It failed to recognise that partisan observations by British members of parliament encourage acts of terrorism in the region and against India more generally. The most egregiously dangerous proposal is the apparent support of major British political parties for a plebiscite to determine the future of the state of J&K. By offering British support for a change in the status quo violence is encouraged. Islamic terrorists conclude it is imperative to keep the matter alive through acts of terrorist violence and constant blackmail of the world by alleging the danger of nuclear war between India and Pakistan, if the issue is not resolved in Pakistan’s favour. As the departing colonial power that presided over veritable holocaust in the Indian subcontinent it ill behoves British MPs to become cavalierly complicit in precipitating another bout of bloodletting for petty electoral gain.

Describing the sentiment favouring a plebiscite as respect for the ‘wishes of the people’ cannot obscure the patent dishonesty of what is being approved. No such demand for respect of the wishes of the people was articulated by members of the House of Commons during the prolonged periods of military dictatorship in Pakistan, when it also waged wars against India. Nor have British parliamentarians thought fit to make similar demands for the portion of Kashmir under Pakistani occupation, which has never enjoyed democratic freedoms. And the fate of Baluchistan, which continues to experience massive state repression by the Pakistani State, has not been the subject of British House of Commons angst. One dire likely consequence of change in the sovereign status of J&K will be a bloody settling of scores with innumerable Kashmiri Muslims Pakistan regards as Indian collaborators. Yet another refugee crisis will surely occur!

British parliamentarians should affirm without apology their approval for confessional states, which appears to be the official policy of the British government in the contemporary Middle East. It has been achieved in Kashmir through murder and terror and the reward for success is evidently to be sovereignty, supported by British parliamentarians. One wonders if the UK mainland will also become a victim of separatist demands since parts of the Midlands, north of England and east London are becoming confessional strongholds.

It is outrageous that no account is taken of almost two-thirds of the people of Jammu and Kashmir who braved threats of terrorist violence to vote in the November 2014 elections to the state assembly. Nor is their cognisance of the extraordinary degree of self government and unprecedented autonomy enjoyed by the region, which includes legal proscription against ownership of land by Indians citizens from outside it. The proscription even extends to the denial or property ownership rights to local women who have the audacity to marry outside the state. It needs to be emphatically recalled that the Government of Pakistan refused the offer of a plebiscite in 1954 because it was not confident of winning it, according to the great champion of its interests, British historian Professor Alistair Lamb. The only demand made by Indian Premier Pandit Jawaharlal Nehru for the plebiscite was that it be supervised by a Scandinavian. Apparently, the Government of Pakistan feared the memories of atrocities committed by Pakistani invaders, including the massive abduction of women and girls were too fresh in the minds of the people of Kashmir.

British parliamentarians are also urged to log on to the UN website to judge for themselves the impossibility of implementing vital conditions required by the UN for the holding of a plebiscite, owing to actions taken by Pakistan. The gifting of a significant portion of occupied Kashmiri territory to China, to which Pakistan asserts sovereignty as a sacred national mission, above all other goals, renders any such proposal conclusively obsolete. Pakistan has also sought to wrest control of the region by force of arms on more than one occasion and failed and India will not now concede sovereignty at peace talks after shedding blood! If British parliamentarians continue to interfere and incite terror in the region against India, as it does periodically, despite proclamations of abiding friendship, it should consider the adverse consequences that might follow. One of them will be for India to revisit competing claims to Gibraltar and the Falklands Islands, on which it has hitherto maintained politic neutrality.

Dr. Gautam Sen is President, World Association of Hindu Academicians and Co-director of the Dharmic Ideas and Policy Foundation. He taught international political economy at the London School of Economics and Political Science for over two decades.
Get Swarajya in your inbox everyday. Subscribe here.
Tags: