Tariff War: Why China Will Pay Heed Sooner Than Later 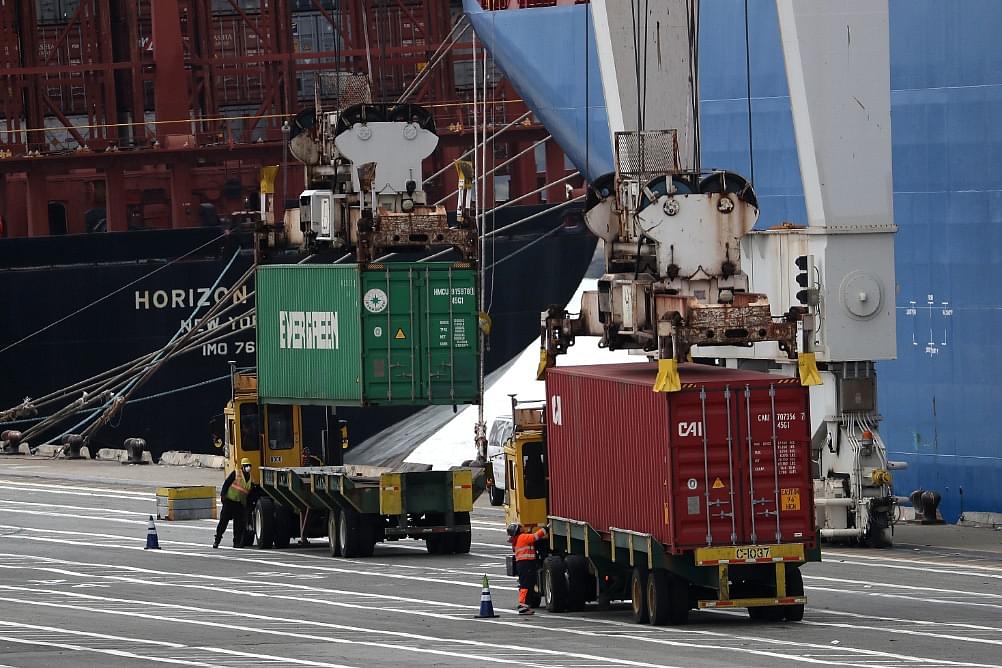 Shipping containers are offloaded from the Hong Kong based CSCL East China Sea container ship at the Port of Oakland in Oakland, California. (Justin Sullivan/GettyImages)

The rising trade tensions between the US and its major trading partners, particularly China and European Union, have been making news for some time now. It may be recalled that the US imposed tariff on imports of Chinese goods worth $200 billion and had also threatened to impose tariffs on cars imported from EU.

But the European Commission led by Jean-Claude Juncker quickly visited Washington DC and appears to have successfully negotiated and resolved the trade issues, at least for now. The EU plans to buy more US liquefied natural gas (LNG) and soybeans and has agreed to work with the US “toward zero tariffs, zero non-tariff barriers, and zero subsidies on non-auto industrial goods". Trump seems to have won hands down in the trade frictions with the EU.

But the trade war with China, on the other hand, seems to be following a different course with no resolution in sight yet. China too had imposed retaliatory sanctions on goods imported from the US. The US has further accused China of manipulating its currency and is now considering additional tariffs on goods worth $500 billion.

The consequences of this internecine tension could be severe and reverberate throughout the world. The International Monetary Fund (IMF) has warned that the current trade war could slow down world economic growth by 0.5 per cent or cost the world $430 billion by 2020. In its World Economic Outlook Update published in July 2018, IMF has warned that the global expansion that was witnessed over the last two years has plateaued and has become less balanced. It projects global growth to stay at 3.9 per cent over the next two years. Translation – any trade tensions, particularly among key economies at this juncture may be injurious to all.

While the specter of a full-blown trade war is never benign, a close examination of US-China trade data that is publicly available, courtesy US Department of Commerce, Census Bureau is indeed revealing. Data for the last eight years (i.e. 2010 through 2018 May) shows US exports to China has been consistent at just over a $100 billion. On the other hand, imports from China have steadily grown from $365 billion in 2010 to $505 billion in 2017. Imports for 2018 will probably be at the same level as 2017. (Please see chart)

US imports are almost four times its exports to China thus giving rise to a yawning trade deficit that is undesirable for any county, and most certainly for the US. But President Trump, by imposing high tariffs, may have converted this liability into a powerful weapon. Given its four to one advantage, China is four times more vulnerable, in dollar terms, than the US. The current impact of Chinese tariffs on US farm sector has been stemmed by a $12 billion federal subsidy announced by the department of agriculture. Hence, any retaliation – both current and proposed – from China will have minimal effect on the US. Trump seems to have the upper hand with China.

One of the key reasons for the imposition of additional tariffs on China – at least the stated objective of Trump – was bringing jobs, particularly manufacturing jobs, back to the US. On this count, however, Trump may have miscalculated. America must wake up to the reality that manufacturing jobs that were squirreled away to China over the decades will never come back.

The fact is that the US is a high cost economy and the final landed cost of manufacture is very high. Secondly the strong US dollar does not help either. Bringing back manufacturing jobs will only price its products out in a fiercely competitive export market. Most manufacturers may not take the bait.

The US government fully understands this. Consequently, over the decades, it has successfully encouraged the migration of the economy to a trade and economic culture that is largely dependent and sustained by innovations and cutting edge technologies. This has helped in the creation of new markets and orient them to where the US will continue to enjoy obvious advantages and hence dominate.

China too understands the nuances of this game and has been in an extraordinary hurry to acquire new technologies at any cost. Hence it is no surprise that China has been consistently accused, over the decades, of industrial espionage and theft of intellectual property (IP) by many countries including the US. It is no surprise that under the given circumstances, President Trump was left with limited options in dealing with an aggressive trading partner like China.

China has not played a good citizen of the world. At every opportunity, it has seized its neighbour’s land in its infamous ‘salami slicing’ strategy to fulfil its expansionists ideology. It has shown no respect for international law – be it the annexation of Tibet or in the blatant militarisation of the Spratly Islands in South China Sea, despite the International Court of Justice (ICJ) verdict against it.

If today, China has a negative residue of international goodwill, it has only itself to blame. Its emergence as a big economy and world player has not been peaceful.

The fact that China has used the BRICS forum to speak out for “free trade” only underscores its desperation. Further, recent reports have indicated that behind its brave façade of resisting US tariffs, China is deeply worried about the potential for many of its companies to file for bankruptcies.

It is indeed impossible to guess as to what is on President Trump’s mind in dealing with China. Is he playing hard ball to get China to the negotiating table for a better trade deal? Or is the US planning to bring China to its knees without firing a shot, given China’s flagrant violation of international law in the South China Sea? Or is it Trump’s larger game plan to cut unfriendly nations to size, given his recent experience in winning over North Korea without firing a shot?

Whichever way you look at it, China seems to be the obvious loser. It is only a matter of time before China will get to the negotiating table to work out a “reasonable agreement” very much in line with the EU example. Before long, normal trade will resume, albeit under circumstances that are lot more favourable to the US.