The Limits Of Grief 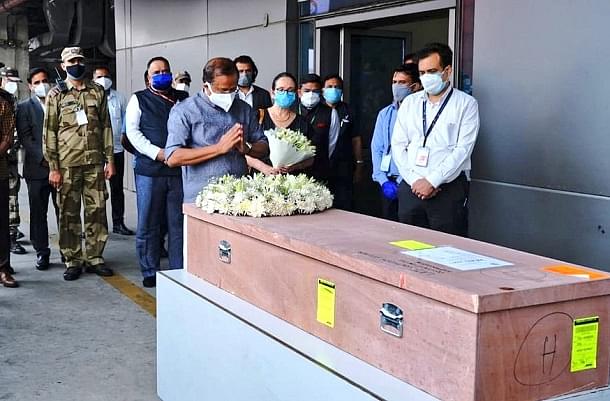 The latest round of conflict between Israel and Palestine was triggered by the firing of thousands of rockets upon Israel by the Palestinian terrorist organisation, Hamas. It has caused much grief in India.

Soumya Santosh, a caretaker working for an elderly woman in the Israeli town of Ashkelon, was speaking on a video call with her family in Idukki, Kerala, when a Hamas rocket hit her residence. She was killed instantly.

What followed in mainstream and social media was a sad lesson, on the extent of public grieving permitted by appeasement.

The difference is that the first edit was to soothe the ruffled feathers of those key demographics constituents, which had just recently showered the Marxists with a rare, renewed mandate; while the second underscored the truth, that electoral hope always springs eternal.

These tributes, which began as sombre commiseration, swiftly degenerated into virtue signalling, and those into farce, because, whatever the truth, blaming Hamas is a no-no. Apparently, in progressive circles, condolences are more a function of a killer’s identity, than the grief of a family, or the worth of a soul.

As a result, even as Soumya’s body was returned to her village in the Cardamom Hills, with an Israeli Consul General in solemn attendance, the focus was not on the loss of a precious Indian life, but elsewhere; a collective of eminent Indian writers and actors (including the usual suspects of Nayantara Sehgal, Naseeruddin Shah, Arundhati Roy, et al) ignored her return, to instead demand that the Egyptian Air Force institute a no-fly zone over the Gaza Strip of Palestine.

Readers may gag at the geopolitical brilliance of progressive Indian intellectualism, which wooly-headedly seeks to expand a localised conflict into a dangerous one with global overtones (Egypt is the only large country in the Middle East, which, for over 40 years now, no longer wishes to purge that region of Jews — not even when the Muslim Brotherhood gained power for a few years, following the Arab Spring).

But the stoic focus of our cultural eminences on what was happening thousands of kilometres away, rather than on a heart-wrenchingly premature bereavement in a village in Idukki, is, in fact, a perfect metaphor for a madness which has infested our lives. It merits cogent investigation.

According to them, the impromptu, unilateral firing of rockets upon Israel by Hamas was not the cause of the present cycle of violence since, hold your breath, it wasn’t action, but reaction. Instead, the collective described Hamas’s belligerence towards Israel as an act of resistance, ‘supported by international law’, against an illegal occupation.

In cerebral solidarity, their tribe circulated a quote attributed to anarchist Noam Chomsky, which stated much the same; a rambling lament of forced deprivation that effectively gives one the moral right to fire rockets at civilian targets.

The collective ended its statement with a triple dirge, bemoaning the Arab nations’ lack of enthusiasm to put Israel in its place, frowning upon Israel’s use of ‘extreme force’ which killed Palestinian civilians, including children, and a worried, magic realism aside on ensuring, that public narratives do not deprive the Palestinians of their ‘dignity and right to resist’ (whatever that means). But not one word on the civilian casualties inflicted by Hamas in Israel, or the senseless murder of Soumya Santosh, an Indian citizen.

When the chicken fat is boiled away, this is the same stance adopted by similar groups, who define Pakistani state involvement in fomenting Kashmiri Islamist separatism, as a freedom struggle against a fascist occupier; though, that is presently beside the point.

Still, to make matters worse, the principal report on the collective’s anguish in The Hindu, was picked up almost word for word by a Pakistani newspaper, while the Prime Minister of Pakistan gallantly shared the Noam Chomsky quote in a tweet.

The reductionist approach to making sense of this contradiction — where a group of Indians expresses anguish over suffering far away, but not to one of their own — is to classify it as classic postmodernist doublespeak.

The cynic’s approach would be to ask: who needs surrealism when we have Indian artists’ collectives? And the sardonic would wonder when the Pakistanis were dispatching their vaunted military, along with those menacing quarter-kilo thermonuclear devices their ministers speak so casually of, to Tel Aviv.

And yet, this is where the advocates of the Palestinian cause, who view the Jews as exclusionary colonisers, have made their biggest mistake: by introducing a chicken-and-egg angle into the present conflict, our worthies have inadvertently delinked the issue from its hoary past.

Maybe that’s a good thing; maybe that’s the best thing to happen since the colonial era, and the Balfour declaration of 1917, which decreed that the Jews would get their homeland back after two millennia.

Thus far, supporting Palestine had been a nostalgic hangover from hippie days, which impressionable youngsters carried on as a coming-of-age rite. But the end of the Cold War made it amply clear, that the one thing the Palestine solidarity brigade didn’t want was peace with the Jews.

So, this is entirely unlike geeky, next-gen techies who wear Che Guevara t-shirts, as the only rebelliousness their strictured lifestyles permit.

Now, we know why our Laphroaig Liberals chose to ignore Sowmya Santosh’s killing in the present instance — to rationalise Hamas’s terror rocket strikes on Israel; and also why they, along with political parties, have consistently striven to downplay Palestinian excesses — because it is not electorally prudent to condemn acts which are demographically sensitive.

That would make one bleed both patronage and votes, with the demographic precision of an Iron Dome system.

But this time it is different, because the world has awoken fully to the perils of identity politics. One man’s terrorist can no longer be another man’s freedom fighter because, finally, the validity of moral relativism, the propagation of false equivalences, and the subjectivity of truth, are all being called into torrid question. The chicken is now the egg, and they’re both cooked.

Consequently, people who can’t tell Salafism from Wahhabism are being openly asked, why they would stand in solidarity with terrorists groups who adopt an absolutist, binary position, and refuse to accept Jews in their midst. This is the Pandora’s Box Donald Trump opened with his Abraham Accords, when, out of the blue last year, the United Arab Emirates, Bahrain, Sudan and Morocco recognised Israel as a sovereign nation for the first time, and started developing formal diplomatic relations with the country.

This is also what is sought to be undone, with appeals for military intervention in Israel being made to countries as varied as Egypt, America and Turkey, by political parties, mainstream media, and fringe groups like the artists’ collective.

Democrats in America are reduced to complaining that they are being let down by a Democrat President, while the Washington Post posits, absurdly, that Israel’s efforts to save Israeli lives may end up prolonging this conflict.

The urgency is palpable; somehow stop the Israelis from demolishing Hamas, before the old narrative gets replaced with the truth. And the parallel, with those who don’t want the Pundits to return to the Kashmir Valley, or with the Aman-ki-asha crowd, who dream of a joyous, partial peace with Pakistan, is self-evident.

Yet, this also is where our world is moving inexorably to: the unviability of amorphous, dual moralities is being checked. The incongruity of specious equivalences, crafted specifically to further specific causes, is being highlighted. And the locus standi of those traditional arbiters, who used to set permissible limits on grief, are being questioned.

In that transition, the value of old records, of which Jew bought how much land from which Ottoman Arab, in the nineteenth century, is slowly losing meaning. The bald truth is that the conflict in the Middle East will only end, when a majority of Arabs accept a Jewish state in their midst.

It is the same in the Indian context, where it is now becoming increasingly difficult to calibrate condolences with the identity of an assailant, even gingerly, rather than with the abstract pain of human loss.

So, one may invoke history, geography or any other discipline of choice, but it still won’t change the fact that Soumya Santhosh was victimised twice — first by a Hamas rocket, and then by her own, who shamefully chose ideology over empathy.

What they just can’t grasp, is that in this day and age, one man’s solidarity is another man’s sin, and he who casts a stone will get it on the chin.