The Meaning Of Trump For Hindu Americans 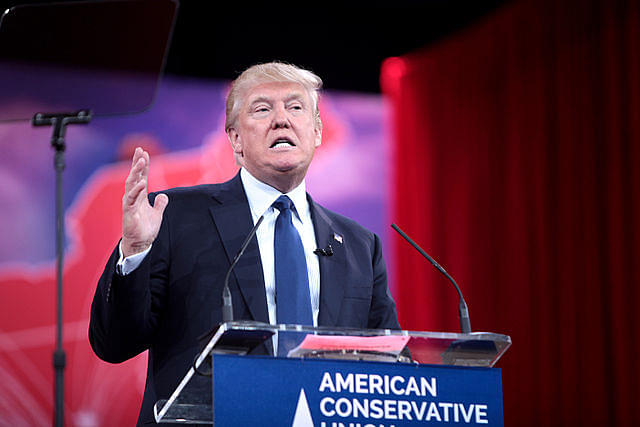 In the Panchatantra, 3 learned but foolish men decide to revive a dead lion from its bones, while a fourth man of modest learning tries to dissuade them and then climbs a tree to escape when they persist. Once alive, the lion devours them. This timeless parable illustrates that power, knowledge, and wisdom are not one and the same. But like other Panchatantra stories, it also condemns those who fail to correct course in the face of looming disaster.

So, my fellow Hindu Americans, let’s talk about the rise of Donald Trump. The American Republican party, which was founded in the mid 1800s to fight the expansion of slavery, has given America some of its best heads of state–Lincoln, whose administration ended slavery; Theodore Roosevelt, who fought corruption; Eisenhower, who presided over unprecedented prosperity. Many Hindu Americans, given experiences with India’s reservations or license Raj, may find the Republican party’s stance on affirmative action, taxes, and regulations appealing. And in a more ordinary election, Hindus compelled by these issues, and those not so compelled, would treat one another with the respect for diversity of opinion that makes our religion famous.

But that was before Trump began his dominance by tapping a reptilian constituency responsible politicians are loathe to touch. From the moment he entered this race, his rhetorical odiousness has struck many as opportunistic rather than bigoted. But to debate this question is to mistakenly focus on the candidate, who may already be on the way down. Trump is alarming for our country, and for our community, not because of what he believes or whether he eventually wins, but because his success to date has redefined the party itself–and not for the better.

There might be many conventional policy reasons to agree or disagree with the Republican party. But for our community, these reasons pale in comparison to actual physical safety and freedom from harassment, neither of which can be taken for granted any longer. Whether Trump himself is a fascist is irrelevant; actual neonazis and white supremacists have actively endorsed him, supporters have roughed up his opponents at rallies, and followers have generally engaged their worst tendencies in the noxious milieu he exploits and encourages. Trump’s promises to purge all 10 million illegal immigrants and ban Muslims from even entering the US, invoked repeatedly, have normalized a message of frightening hostility from the mouth of one seeking to wield enormous state power.

Some in our community will object that Trump’s (and Republicans’) pronouncements are about Muslims, not about us. But like many of you, I have actual Muslim friends and colleagues of varying religiosity, none of whom are members of ISIS, none of whom should have to look over their shoulders walking down the street or in their houses of worship for the fear of violence from citizens operating with tacit impunity, or live under actual threat of harassment from state actors themselves, all for the color of their skin. And neither, as Hindus, should we. Make no mistake: Trumpian-Republican rage will not distinguish itself by its fine philosophical nuance. Brown skin will be the shorthand by which “terrorists” are known, as it ever has been, and will prove the worse for Muslims, Sikhs, and Hindus alike.

Bigotry in American history, as in the world, is not new. But the Republican party of George Bush and John McCain at least denounced it with the seriousness it deserves. Not so the current incarnation, which courts the real estate developer’s followers by trying to out-Trump him. On 3 February, President Obama gave a speech at an American mosque, repeatedly stressing a welcome message of inclusion that I would like to see repeated at Hindu, Sikh, Buddhist and Jain centres of worship. This message prompted one of the Republican hopefuls to denounce him as divisive.

I’m tired of being divided against each other for political reasons like this president’s done. Always pitting people against each other. Always! Look at today: He gave a speech at a mosque. Oh, you know, basically implying that America is discriminating against Muslims. Of course there’s discrimination in America, of every kind. But the bigger issue is radical Islam. And by the way, radical Islam poses a threat to Muslims themselves. They argue that. They’ll tell you that. But again, it’s this constant pitting people against each other. I can’t stand that. It’s hurting our country badly.

That man was not Trump (though Trump had his own reaction), but rather the current establishment favorite, Senator Marco Rubio. The very idea of America–out of many, one–that the President was extolling is now considered divisive by the Republican party.

In the GOP race, knowledge and statesmanship mean nothing; animus, expressed in as ugly a way as possible, is supreme. The Trump-led Republicans, too clever by half in their quest to expand the electoral map, have put ever greater flesh on the bones of open bigotry exploited for political gain. It remains for the rest of us–Hindus included–to stop them, before this lion draws breath and it becomes too late for our community, for the party, and for the country as a whole.

Raman Khanna is a physician in San Francisco. The views expressed are his own.

Raman Khanna is a physician in San Francisco. The views expressed are his own.
Get Swarajya in your inbox everyday. Subscribe here.
Tags: