The Rumour Itself Is The Story, Even If Sirisena Denies Saying That R&AW Plans To Assassinate Him 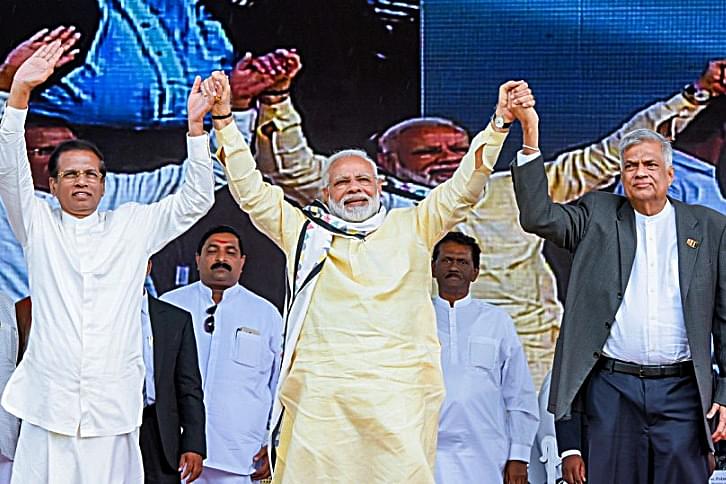 Sirisena’s alleged comments have sent the media into a tizzy, triggering the fortnightly flood of commentaries on how Modi and his aids have ‘mismanaged’ India’s relations with its neighbours. Much of it seems to be misinformed and devoid of evidence.

R&AW has maintained a large presence in the island nation since the outbreak of Tamil militancy and the emergence of the Liberation Tigers of Tamil Eelam, an outfit which it is believed to have trained in the early days. Most recently, in 2015, the then president of Sri Lanka, Mahinda Rajapaksa, blamed the agency for his defeat in the elections. Therefore, the use of the agency’s name in particular and the ‘Indian hand’ in general, by politicians in the neighbourhood for electoral benefits has precedents. Case in point being the 2017 elections in Nepal which saw the communist parties whipping anti-India sentiments to rally support.

Ahead of the 2015 elections in Sri Lanka, India is believed to have encouraged the opposition to form an alliance. India’s approach was shaped by Rajapaksa’s perceived closeness to China and his approval of multiple projects with Beijing, which New Delhi saw as being detrimental to its security interests.

Both Rajapaksa and Sirisena belong to the same party, the Freedom Party. A faction of the party, led by Sirisena, had joined hands with Wickremesinghe’s United National Party, which had emerged as the single largest group in the 2015 election, giving it a majority in the parliament. As a result, Rajapaksa lost power after a decade in office. In the current scenario, all the three leaders see themselves as contenders to the highest office in the country. As the elections scheduled for early 2020 come closer, the clash between the three leaders appears to be growing.

The rift and power struggle between Sirisena and Wickremesinghe has come out in open on multiple occasions. Recently, Sirisena took away the central bank, the policy-making National Operations Room and several other institutions from the control of Wickremesinghe, who had held them since coming to power in 2015. His attempt to extend the current term by one year was dashed by Sri Lanka’s top court earlier this year. The fact that Wickremesinghe is perceived by New Delhi as a Sri Lankan leader who is “pro-India, pro-business and not anti-Tamil”, adds to Sirisena’s trouble. Wickremesinghe’s party has suggested that it may go it alone in the next general election in 2020.

Rajapaksa, on the other end, has been trying to make up with India. The former president, who continues to remain popular in the country, was recently in New Delhi to meet Prime Minister Modi. By agreeing to a meeting, New Delhi was seen as sending a message to Sirisena that it would not hesitate to widen ties with other players on the country’s political landscape.

India has reasons to be upset with Sirisena. Under his watch, the country's slide into China’s debt trap does not seem to have stopped. Work continues on the Colombo Port City project, an initiative being financed by Beijing with a nearly $1.5 billion loan. Moreover, Sri Lanka is reportedly planning to borrow an additional $1.25 billion from China in the coming months for more projects. Sirisena was recently heard boasting about “another gift” from Beijing, in the form of an offer for $295 million grant, to be “utilised for any project of my wish”. (Before the 2015 election, the China Harbour Company gave $7.6 million to Rajapaksa for his re-election bid).

This is a concern for New Delhi. As Sri Lanka gets deeper into the Chinese debt trap, it will have to make more concessions to China. The phenomenon was on display when the Sirisena government had to lease the strategically located Humbantota port to a Chinese state-owned for 99 years in debt-to-equity deal.

In this scenario, Sirisena’s allegation against R&AW, which he has denied in a phone conversation with Modi, seems to be a symptom of the imminent election season in the island nation. The fact that it came just days ahead of Wickremesinghe’s scheduled trip to India, where he will meet Prime Minister Modi, can’t be discounted.

From New Delhi, electoral politics in neighbouring countries looks like a never ending chaos which it has to navigate to secure its interest. With all its constraints, many of which are of its own making, India has managed to do this reasonably well. Case in point: the end result of the protracted crisis in the Maldives just weeks ago.