These New Arrangements Between India And Bangladesh Are Improving Trade, Connectivity To The North-East 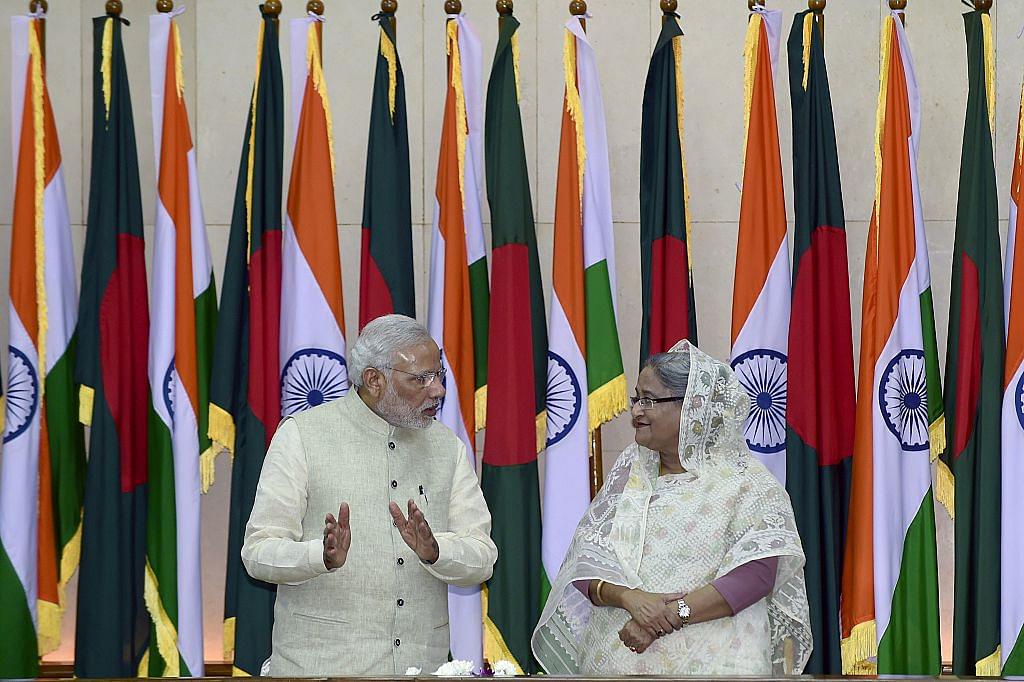 Two weeks ago, inland vessel MV Maheshwari, loaded with 53 containers of petrochemicals, edible oils and beverages, reached Pandu river port at Guwahati in Assam from Haldia in Bengal via Bangladesh.

The 1,425-kilometer journey was an epoch-making one: it was the first time after 55 years that an Indian cargo vessel journeyed from Bengal to Assam via Bangladesh.

The journey has been made possible with the signing of the Indo-Bangladesh Protocol (IBP), an inland water transportation and trade protocol between the two countries, that had been pushed by Prime Minister Narendra Modi.

Apart from transiting through Bangladesh’s rivers, India has also got Bangladesh to permit transhipment of goods from Bengal (and the rest of India) to the landlocked Northeast India through its land routes.

Next on the agenda is the reopening of rail links from the Northeast and North Bengal through Bangladesh, to the rest of India.

Immediately after becoming the Prime Minister in end-May 2014, Modi launched his outreach to Bangladesh. A year later, a number of key agreements, including the IBP, were signed during Modi’s visit to Dhaka in early-June 2015.

The primary purpose behind getting Bangladesh to allow use of its territory for transporting goods, and also for passenger traffic, to and from Northeast India is to unlock the potential of that landlocked region. And it also fit in perfectly with Modi’s ‘Act East’ policy.

Since the landmark visit by Modi to Dhaka in June 2015, a number of other important deals to transit through Bangladesh have been reached.

The Akhaura to Agartala rail line will be completed next year and will reduce travel time from Kolkata to (Tripura’s capital) Agartala from 38 hours to 10 hours and distance from 1,500 kilometers to 500 kilometers.

Akhaura in Bangladesh is on the Dhaka-Chittagong railway line and India is building a 12.03-kilometer rail line from Akhaura to Agartala at a cost of Rs 972.5 crore. The Maitree Express, which plies between Kolkata and Dhaka, now will then be extended to Agartala.

Last month, India and Bangladesh finalised the SOP for use of Mongla and Chattogram ports in Bangladesh for transporting goods to and from Assam, Megahlaya and Tripura. The MoU for use of the two ports was signed in June 2015 and with all the protocols in place now, transhipment of goods to the Northeast through Bangladesh’s waterways, rail and roads is set to take off in a major way.

For instance, it takes nearly a month for heavy machineries and goods like iron and steel to be transported from Kolkata to Agartala through North Bengal, Assam and Meghalaya to Agartala, a distance of more than 1,600 kilometers.

But from now on, such goods can be transported by road and rail routes in Bangladesh to Agartala, cutting the distance to 500 kilometers and the journey time to 10 days at most. The shipment costs will also come down by at least 50 per cent.

India is also developing two stretches of the IBP waterways routes between Sirajganj and Daikhawa and between Ashuganj and Zakiganj (all within Bangladesh) to allow movement of larger cargo ships on the routes. India is bearing 80 per cent of the expenditure of Rs 306 crore for this.

India is upgrading the existing narrow road from Ashuganj (near Dhaka) to Akhaura (51 kilometers) to a four-lane highway.

This will allow faster transportation of goods from  Kolkata that reach Ashuganj river port through the IBP waterways routes (in Bangladesh) to Akhaura and then to Tripura.

Container Corporation of India (Concor) has started a regional service from Krishnapatnam port (112 miles north of Chennai) to Chattogram port in Bangladesh. This will also help is faster and smoother transportation of goods from the southern states of India to Chattogram and then to Tripura and other Northeastern states.

By 2021, an old rail link between Haldibari in Bengal’s Cooch Behar district and Sealdah in Kolkata would be open.

This will reduce travel time from Kolkata to Cooch Behar via the narrow ‘chicken’s neck’ corridor of North Bengal from 11 to seven hours and the present 573-kilometer distance by nearly 200 kilometers.

This rail link, like many other rail, road and riverine routes, was operational till the Indo-Pakistan War of 1965. Once the Siliguri-Cooch Behar rail route via Bangladesh becomes operational, goods and passenger traffic from North Bengal and western Assam, as well as Bhutan, will benefit immensely and will get a boost.

Once these old rail links are revived, export of many natural resources, agricultural produce and other goods from the Northeast to the rest of India and the world will become faster and cheaper.

India’s first international multi-modal transhipment hub is coming up at Jogighopa in Assam.

This ADB-backed Rs 600 crore project will facilitate faster and cheaper movement of cargo from Assam, Arunachal Pradesh, Nagaland and Bhutan through Jogighopa and thence via Bangladesh to other destinations.

All these will end the geographical isolation that has been the main impediment in development and economic growth of the Northeast.

The tremendous potential that the region possesses in export of natural resources, agricultural and horticultural produce, handicrafts, garments, pharmaceuticals and many other products will then be unlocked, thus fast-tracking the region’s development and economic progress.