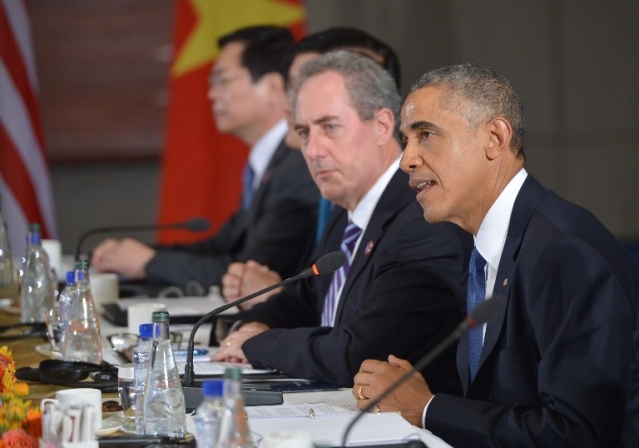 While the Trans Pacific Partnership (TPP) Agreement would become the largest FTA in the world, its political fallout would need to be carefully understood.

The recently concluded negotiations for a mega free trade agreement (FTA) between 12 Pacific rim countries has attracted considerable attention from political leaders, researchers, policy makers and civil society activists. While the FTA – referred to as the Trans Pacific Partnership (TPP) Agreement – is meant to liberalise trade among Australia, Brunei, Canada, Chile, Japan, Malaysia, Mexico, New Zealand, Peru, Singapore, United States and Vietnam, it is aimed at restoring American supremacy in commercial matters and global rule-making on trade issues. TPP is also beset with many contradictions and problems, resulting in protests in some signatory countries.

Any attempt to understand the contents of the TPP runs into a problem – the final text of the agreement is not yet in the public domain and is likely to remain a secret for another month. Anecdote has it that till a few months back, even the US lawmakers were denied access to the negotiating texts. Hence, some of the reactions to the TPP might prove to be speculative. It is indeed ironical that while the TPP has a chapter on transparency, the negotiations were shrouded in a cloak of considerable secrecy.

So, what is the TPP text likely to contain?

Leaked versions of the negotiating texts suggest that the 12 countries have agreed to eliminate customs duties on almost all products. However, the benefit of any zero duty regime would be confined to the TPP countries and would not be extended to countries outside this trade deal. The agreement requires countries to treat domestic suppliers at par with foreign suppliers in government procurement. It binds the signatory countries to further opening of the market in services, particularly for financial services and telecommunication services. TPP prohibits countries from implementing measures aimed at restricting data flow over the internet. With the stated objective of creating a level playing field, restrictions have been imposed on government funding, and functioning, of state-owned enterprises.

The most contentious chapters of the TPP relate to the protection of intellectual property rights (IPRs), investment protection, labour and environment. With the TPP providing more stringent protection for IPRs, this is aimed at limiting, if not totally eliminating, competition faced by patented medicines from cheaper generic drugs. It should surprise no one if national budgets on public health in the TPP countries soar on account of patented medicines enjoying monopoly pricing for longer periods. Of course, for the general public in the 12 countries, access to affordable medicine could fast become a receding dream. Civil society in many TPP countries has been protesting this negative aspect of the TPP.

On the issue of labour, the TPP would require the signatories to adhere to certain core ILO conventions. These relate to acceptable conditions of work with respect to minimum wages, hours of work, child labour, and occupational safety and health. The environment provisions require the TPP partners to implement laws or regulations prohibiting trade in illegal wildlife or plants and illegal logging, apart from conservation of endangered species, marine fisheries and check illegal logging.

The inclusion of provisions on labour and environment in the TPP have been criticised on the ground that these issues are not trade related and that they open a Pandora’s Box for bringing more non-trade related issues with political overtones in trade agreements in future.

How would the TPP benefit the signatories? A prominent think tank in the United States has estimated that on implementation of the agreement, income of the signatory countries could increase by $300 billion. However, projections of future gains should be taken with a healthy dose of skepticism as most attempts to quantify the impact of past trade agreements have proved to be wide off the mark. Further, there is also a tendency among certain prominent economists to overstate the gains with the objective of inducing countries to hasten trade negotiations. TPP may not be an exception to such motives.

While trade gains are the ostensible reason for the TPP, there are two important underlying motivations behind it. First, as the TPP provisions are primarily based on similar provisions in past FTAs of the United States, it serves the objective of reasserting the American supremacy on issues related to rule-making in international trade. It is also likely that the United States will make a strong pitch for using the TPP provisions as the blue print for similar provisions at the World Trade Organisation (WTO).

Second, the TPP is an attempt by the United States to reduce the growing dependence of other countries on China for their exports. The fast-growing commercial, and hence political clout, of China can be gauged from the steep surge in its share as an export destination for many of the TPP countries. To illustrate, over the past two decades, Australia’s dependence on China for its exports has surged from 3 per cent to 33 per cent, for Chile from 2 per cent  to 25 per cent and for Japan from 5 per cent to 18 per cent. If left unchecked, this increasing trend would have severely dented the economic salience of the United States.

Overall, while the TPP would become the largest FTA in the world, its political fallout would need to be carefully understood. If China views it as an attempt to constrain its commercial aspirations, then global trade and politics could enter a new phase of choppy waters. India would also need to keep its public policy imperatives in mind and address the consequences of being excluded from TPP.

Abhijit Das is the Head, Centre for WTO Studies, Indian Institute of Foreign Trade. The views expressed are personal.