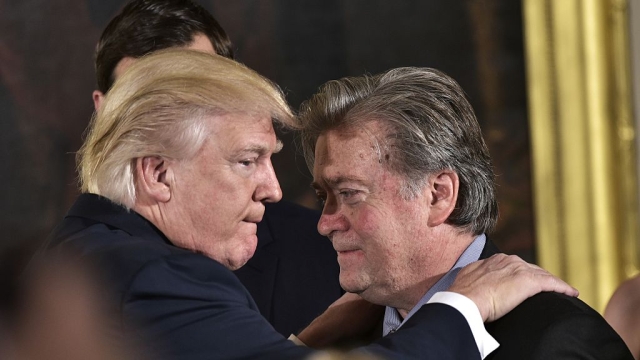 If one were to believe this report by The Daily Beast (TDB), Steve Bannon, Chief Strategist for the US President Donald Trump is obsessed with war and ‘Bhagwad Gita’ is one of his top two favourite books along with Sun Tzu’s The Art of War, an ancient Chinese book on military strategy. This is what two of Bannon’s former friends seem to have disclosed to TDB.

TDB’s second source of confirmation for the above tidbit is Julia Jones whom the website refers to as Bannon’s longtime Hollywood writing partner and former close friend. In an interview to the website before Bannon joined Trump’s campaign team last year, Jones had this to say:

Steve is a strong militarist, he’s in love with war—it’s almost poetry to him”, TDB quoted her saying. He’s studied it down through the ages, from Greece, through Rome... every battle, every war… Never back down, never apologize, never show weakness.

TDB further quotes Jones saying that Bannon “used to talk a lot about dharma—he felt very strongly about dharma... one of the strongest principles throughout the Bhagavad Gita.”

TDB is a left-leaning platform in the US and no fan of Donald Trump. Since the day he assumed office, mainstream media has launched a series of negative stories on his administration and his actions. So, this piece might as well be a hit job on Trump’s closest aide and top adviser showing him as a war hawk. It was also no surprise that the piece came just after Bannon was appointed as a permanent member to the National Security Council, main forum which helps shape the US President’s foreign and national security policy.

Swarajya couldn’t independently verify the claims made by TDB.