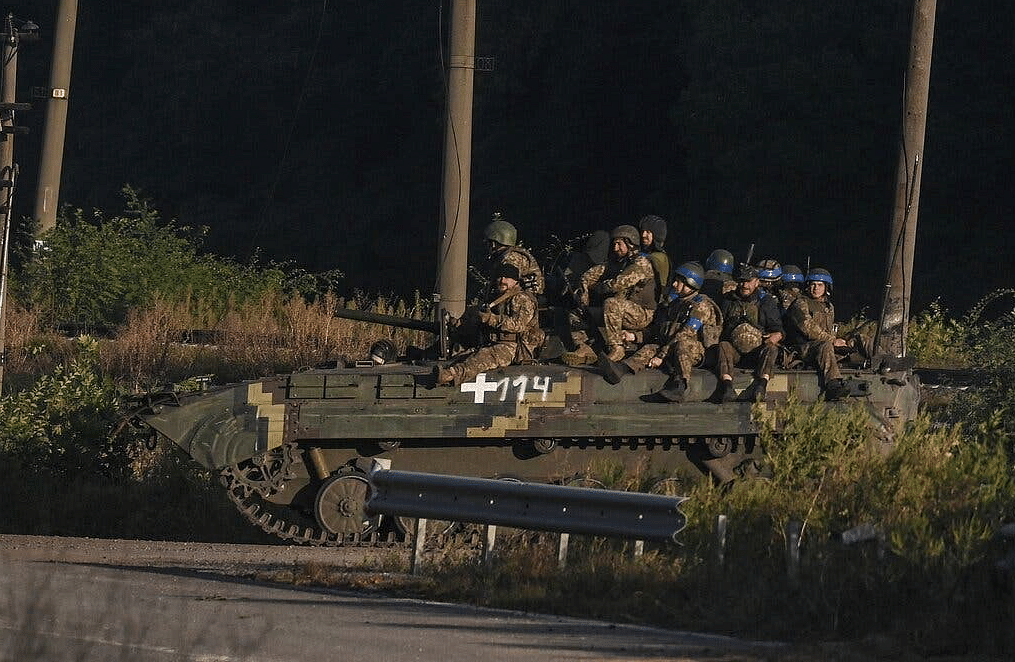 Ukrainian soldiers riding on an armoured vehicle in Kharkiv on Friday.

Ukraine launched its much awaited counter-offensive a few days ago.

The counter-offensive began with a long-awaited push on Kherson in southern Ukraine last week.

Russians expected this offensive on Kherson, what they didn't expect is an offensive on the northeastern city of Kharkiv.

The goal of the offensive is to cut off Russian forces defending Izium, which is an important logistics hub for Russian forces in the region, followed by taking the city itself.

Ukraine's stunning offensive was possible because Russia redeployed tens of thousands of troops from the east to the south ahead of the expected Ukrainian offensive there on Kherson.

An offensive on Kherson is underway, but Russians were clearly led into believing that Kherson, in the south, is where the major action will be taking place.

The Ukrainians, expecting Russians forces to be diverted to the south, prepared themselves for a swift offensive on Kharkiv, the north-eastern part of the country.

Russia’s front lines have basically collapsed in a crucial parts of northeastern Ukraine. This has ceded a wider area to the surprise Ukrainian offensive.

By yesterday, Russian forces had left a critical logistics hub, the city of Izium, due to the advancing Ukrainian forces.

Russia has also retreated from Balakleya and the major railway city of Kupiansk.

Several villages in the region are falling back as well, from Russian control to Ukrainian control.

The Russian Ministry of Defense has confirmed that Russian forces have retreated from Izium and the town of Balakliya.

Just a day earlier, the Russian Ministry of Defence had stated that it was reinforcing the area.

The dizzying pace of Ukraine’s push has ended what had been a months-long stalemate.

Russia's retreat is the biggest embarrassment for Moscow since Russia's failed attempt to seize Kyiv.

It is hard to overstate the importance of Balakliia, Kupiansk and Izyum. These cities are crucial to the supply and logistics of Russian military operations in eastern Ukraine.

There are multiple reports indicating that in many places, Russian forces aren't even fighting and just retreating. This might have something to do with the balance of resolve.

Unless Russian troops know they are going to succeed in subduing the enemy, they seem to be making that choice of avoiding engagement at all, whenever they are faced with an uphill battle.

As Russian forces retreated, Putin was presiding over an inauguration of a giant Ferris wheel in Moscow.

Pro-Russian bloggers reporting from the front lines, who provide a uniquely less-censored view of the war, expressed their shock.

As Putin was presiding over a celebrating commemorating the 875th anniversary of the Moscow’s founding, one blogger wrote in a widely circulated post, "You’re throwing a billion-ruble party. What is wrong with you? Not at the time of such a horrible failure.”

In a span of merely few days, Ukraine’s rapid advances in the northeast has reshaped the battlefield in eastern Ukraine.

A new updated map released by the Russian Defence Ministry, confirming Russian retreat after the Ukrainian advance, shows that Russian forces have withdrawn to the eastern side of the Oskol River, about 10 miles east of Izium.

It appears that the river now represents the new front line in the region.

The war, which for months had been defined by grinding battles between two armies along largely static front lines ranging 1,500 miles, has changed in a few days, due to the surprise, swift, Ukrainian counter-offensive in the northeast.

Ramzan Kadyrov, the strongman leader of Chechnya and a staunch loyalist of President Vladimir V. Putin, has expressed his dismay over the Russian retreat.

His statement reflects a sense of shock that many Russians are feeling and an inability to comprehend what just happened.

However, life for most Russians goes on as usual and few are emotionally invested in the war.

Meanwhile, the Ukrainian offensive in south is progressing slowly.

This offensive is the one that Russians were expecting and had planned for. Russians diverted their troops from other regions to the south, to be prepared for this offensive.

Russian forces near the port city of Kherson remain steadfast.

Russians have introduced the Ruble in Kherson. They are issuing Russian passports to people in the region and have already instituted a Kremlin-friendly curriculum and could soon announce a referendum in order to claim the territory as part of Russia.