War's Impact On Fertilisers And Global Food Supply: The Vicious Cycle Of Food Insecurity And Violence 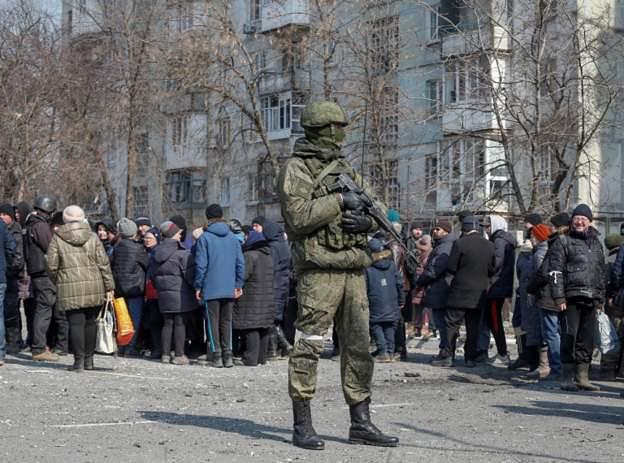 People queuing up for food in Mariupol

Ukrainians are queuing for food in the besieged city of Mariupol as Russian troops observe them, their fingers not far from the trigger. Not far from them, European leaders and American President are scheduled to meet for NATO summit.

War in Europe will touch almost everyone, either in the long term or short term. The war isn't impacting the food supply of only those Ukrainians queuing up under the smoky sky of Mariupol. It will impact food supply around the globe.

To understand why we must first take a glance at farming. With the world's population rising and the amount of overall food consumption going up, gone are the days of a family tilling their own land to harvest crops and feed their family.

Most of our food comes from industrial scale crop harvesting. The primary factor people in this business need to worry about is - yield. The higher the yield, the better it is (well, most times).

To boost yields to meet the current demand of global food consumption, farmers around the world by and large rely on fertilisers.

What does this have to do with war in Europe?

There was a rather hubristic meme floating around in many countries around the world. The meme's basic bottomline was that - 'well, who cares about Russia, it is nothing more than a 'big gas station'. Well, it is clearly more than that.

It is not just nitrogen fertiliser. Last year, Russia was the largest exporter of urea (well, it is nitrogen), NPKs, ammonia, UAN, ammonium nitrate and the third-largest potash exporter.

Comically enough, other than Brazil, it is EU and US who are to a significant degree dependent on Russian fertilisers and related raw materials. While the U.S. doesn’t buy much fertiliser directly from Russia, countries that do are now shopping among America’s suppliers.

Due to disruption in shipping, shortage in supply and all other moving variables which are a result of the war and western sanctions, prices of fertilisers have gone up.

According to the Green Markets North America Fertilizer Price Index, fertiliser prices have jumped 10% last week, and 40% from the previous month.

Cost of our Globalised world

Our world economy fits pretty closely with this description. Destabilisation in one region can have significant negative consequences in other regions. Hence students of economics these days keep yammering about 'resilience'.

What is resilience? It is in essence, how to ensure that at the altar of efficiency we don't end up sacrificing our ability of self-reliance and become too dependent on other nations.

Resilience and efficiency are not exactly trade-offs in the true sense. It is more like a regulator in our home's switchboard. Let's say 1 = resilience and 5 = efficiency. No nation will dial their regulator at either 1 or 5. Each nation decides for itself what the sweet spot is, somewhere between 1 and 5.

For better or worse, since the fall of Soviet Union, global economy has gone too much towards 5 i.e. prioritised efficiency. As became clear during the pandemic, this has a cost. In case this message wasn't taken to heart by us, the war raging in Europe crystallises this even more.

Consider this, Brazil, an agricultural giant, imports a significant amount of its fertilisers from Russia. Brazilian farmers use this fertilisers to grow soybean. They are in fact the highest producers of soybeans. Their biggest market is China. China uses these soybeans to feed their livestock. The domino effect - cost of fertilisers goes up, ultimately as a result, price of meat in China goes up.

This is just one example, the thicket of globalised food supply is filled with such examples along with the more obvious examples.

On the off chance that talk of pork dumplings made you think that it's not much on an issue, consider the alarm bells about food scarcity and the necessity to provide food security that are going off.

UN Secretary-General António Guterres warned two days ago that the war in Ukraine can “spiral into a global hunger crisis.”

Regions like Africa face the risk of highest destabilisation, primarily northern and north eastern Africa, including the horn of Africa. UN's International Fund for Agricultural Development analysis states that -

These developments come at a rather vulnerable time. Even before the war, some regions in the world were staring at the challenge of heightened food insecurity. A report released by UN last year suggests that hunger in Latin America and the Caribbean is at its highest since 2000. The number of people bearing the heavy cross of hunger rose by 13.5 million in just one year, reaching a total of 59.7 million.

The fact that hunger leads to a more fertile environment for violent conflict is self-evident. Nations around the world will recalibrate their economic strategy. Turn the dial of regulator a bit further away from 5 i.e. efficiency and a bit closer to 1 i.e. resilience.