Wearing Burkini Is A Political Act And It Must Be Banned: Sarkozy 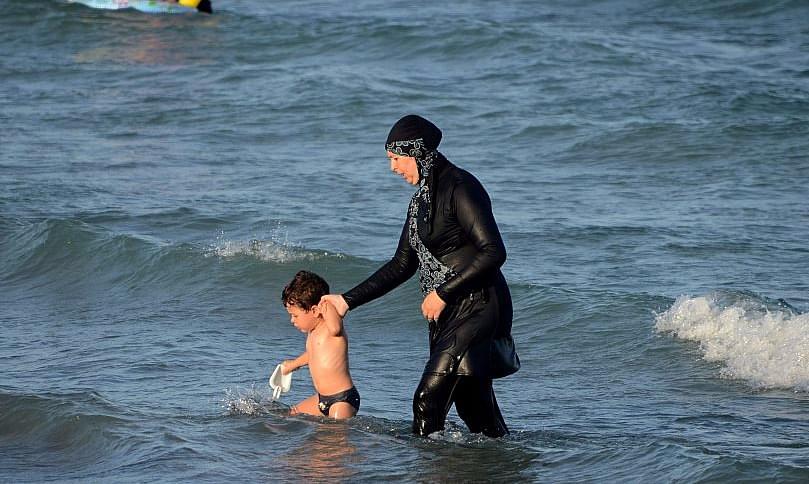 A woman wearing a burkini walks in the water with a child. Photo credit: FETHI BELAID/AFP/GettyImages

The raging row over burkini ban in France has escalated further with the former conservative president, Nicolas Sarkozy, wading into the debate and labeling the swimwear a “provocation” that supports radical Islam.

Controversy over the ban, imposed in some of the top Riviera resorts, reached a new peak earlier this week after photographs emerged showing armed police officers forcing a woman on a beach in Nice to remove her burkini.

Several women have now been penalised for defying the ban.

“Wearing a burkini is a political act, it’s militant, a provocation,” Sarkozy said in an interview, ahead of a court ruling that will determine whether the ban was legal.

“If we do not put an end to this, there is a risk that in 10 years, young Muslim girls who do not want to wear the veil or burkini will be stigmatised and peer-pressured.”

Weighing in on the controversial burkini debate gripping the country, Socialist Prime Minister Manuel Valls declared that the outfit “represents an archaic vision of a woman’s position in society” which is “not compatible with French values”.

He backed the mayors, who, facing a rise in tensions, hurried to find a solution that would avoid jeopardising public order.

“It is a political project that goes against modern society, and is based on the enslavement of women,” Valls said, and added the full-body garment represented an “archaic vision of Islam”.

Experts argue that while there is a strong security justification for banning the burka, the same cannot be said about burkini. If someone tried to carry a Kalashnikov beneath a burka, they would be – and have been – able to get away with it. The same principle applies considerably less in the case of the tight-fitting burkini.

However, as politicians are falling over each other to call for a ban on the Islamic swimwear, top newspapers in the neighbouring UK are running daily reports, shrilly denouncing the ban, without having a clear understanding of the extent of extremism France is facing.

Another key factor these liberal writers are ignoring is that more than 100 of the country’s 25,000 mosques are controlled by Salafists, the most puritanical Islamic ideology.

They want all women covered up, throughout the day, and the burkini is part of their new game plan. For them, it is a symbol of Islamic purity with a clear message: good Muslims wear the burkini, bad ones wear the bikini.

The ban is now set to be scrutinised by the country’s highest administrative court, after human rights groups challenged the prohibitions.

Many critics, however, disagree as they feel it is a political ploy to sound hawkish about Islamic terrorism after an Islamic terrorist attack. Also it is not addressing the core issue of radicalised Muslims entering EU unchecked.